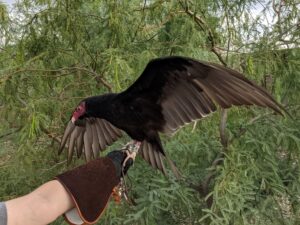 Quanah was a juvenile when he was found injured in Ajo.  A preliminary medical examination found that he had a fracture to his right wing and that it could not be repaired surgically. With limited use of his right wing, his flight capabilities were compromised, and he was determined to be non-releasable. With that, Quanah became a permanent member of the education team.