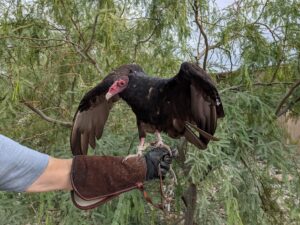 Bryce arrived with his right wing was injured, probably having been hit by a car. Radiographs showed multiple injuries to the wing and their location. The condition of the bone precluded surgery. Once the fractures healed, it was observed that Bryce did not have full wing extension and would not have full flight ability.  He was determined to be non-releasable.