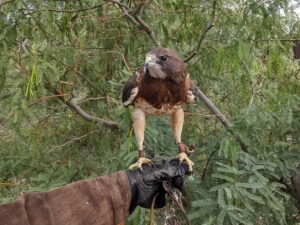 Sundance came to Liberty Wildlife from a facility in Sierra Vista. His accompanying medical notes revealed that a person found Sundance on the ground as a nestling and cared for him for several days. During that time, he became imprinted and non-releasable.