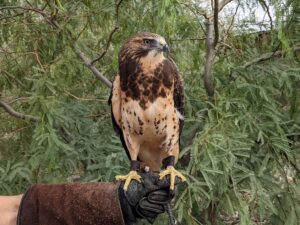 Cassidy was brought to Liberty Wildlife as an immature, first year with a badly fractured left wing. Following a week in ICU, Cassidy began having severe sloughing of the tissue, an indication that his injury resulted from electric shock. Eventually, the left-wing tip was amputated, limiting his full flight capabilities. He was classified as non-releasable and assigned to the education team.