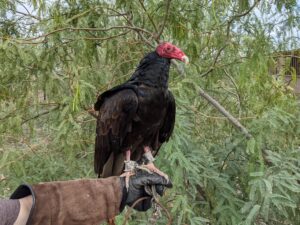 Bailey was hatched at the Phoenix Zoo in 1986. He quickly learned that food would be provided by the zookeepers rather than his parents and followed the food handlers. As a result, Bailey became imprinted. Since the Zoo already had Bailey’s parents, the administrators sought to place Bailey. Dr. Orr, founder of Liberty Wildlife and one of the Zoo’s veterinarians, agreed to place Bailey at Liberty. He is one of the oldest education birds and one of the final birds that handlers will learn to handle.