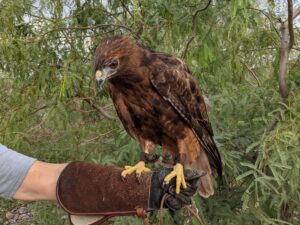 Chaco was taken from her nest as a juvenile and raised by people. She arrived at Liberty Wildlife as an imprint, unable to relate to her species and expecting people to care for her. Because she has no physical injuries, Chaco is being trained for Liberty’s flight program.