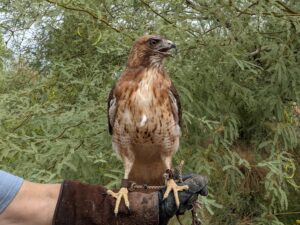 Emmitt was found on the ground as a nestling. It was uncertain how long his rescuer had been caring for him, but during intake he demonstrated behaviors that he had become imprinted. He was placed with foster red-tailed hawks and other young red-tailed hawks, but he showed no signs of accepting them. It was apparent the imprinting was irreversible at this stage of his life. He became a welcomed addition to our education animals.