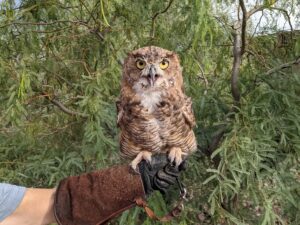 Maggie was found on the ground with severe head and ear canal wounds. They appeared to be talon marks, leading to speculation that a bird of prey, possibly a red-tailed hawk, had tried to take her from the nest and could not carry her. Maggie was transported to Liberty Wildlife as soon as she was found. Concern that her hearing, upon which these owls are vitally dependent, had been damaged, the medical decision was made that to ensure her survival, Maggie would be kept in captivity.