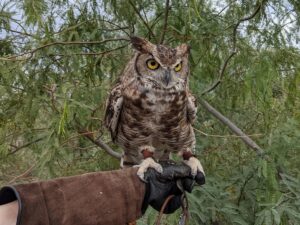 Lucien was brought to Liberty in July 2020 as a juvenile. His right wing had been injured while he struggled being caught in barbed wire. Surgery to the wing was not a viable option. Since he did not have full flight ability, he was classified non-releasable and assigned to the education team.  He is named for Lucien B Smith of Kent, Ohio, who held the first patent on barbed wire issued in 1867.