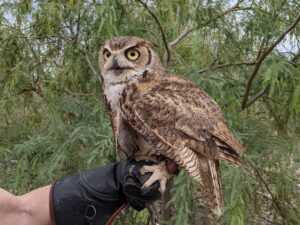 Edison was found in a pool and brought to Liberty.  The medical exam determined that he had a fractured right wing that could not be surgically treated. The injury healed well but placed the wing at such an angle that he could not achieve full flight. As a male great horned owl, he was a welcomed placement with the education team.