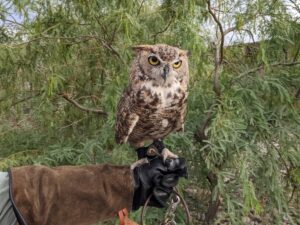 Darwin’s rescuer found him as a fledgling on the ground in Scottsdale. He had an obvious wing injury. The Liberty medical team determined from the X-rays that he had a fracture at his elbow on his right wing, causing the wing to droop noticeably. Flight tests determined that he fatigued quickly and would be unable to be a successful hunter. He was non-releasable.