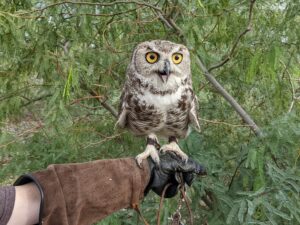 Hedwig was found at a park in Queen Creek in 2001. It was obvious from her behavior of seeking food from people that she was an imprint who had escaped or been released. She was taken from the park by a kindhearted man who did not know much about birds of prey. He placed her in with his chickens until he discovered that great horned owls eat chickens!  Following his call to Liberty Wildlife, Hedy, as she is affectionately called, was transported to Liberty. As an imprint, Hedy cannot be released because she will continue to seek out humans to feed her and she will not interact with her own species.