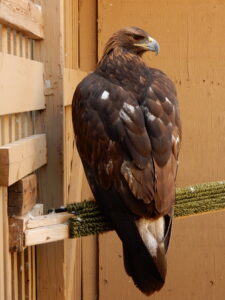 Brienne (Brie) was brought to Liberty Wildlife as an immature first-year eagle having severe wing injuries because of electrocution. She had both nerve and tendon damage, eliminating her ability to fly. Additionally, she was found to have aspergillosis (Valley Fever) which would require periodical blood work to monitor this disease throughout her life. She is now an eagle ambassador for Liberty.