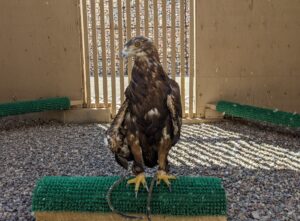 Apache was standing at the side of Beeline Highway, probably eating roadkill, when a semi-truck approached him. As he flew to avoid the truck, Apache cleared the cab but hit the trailer. The impact knocked him unconscious. Ezekiel Good Eagle Buffalo, a member of the Apache tribe, stopped his vehicle and wrapped the injured eagle in a sleeping bag, and brought him to Liberty Wildlife for aid.

He is named for the tribe of his rescuer.