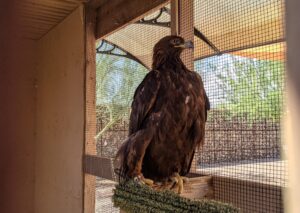 Anasazi was brought to Liberty Wildlife as a 3-week-old nestling by an Arizona Game and Fish officer. AG&F obtained Sazi from a Lakeside rehabber, who had been told by the person who brought Sazi in, that he found her on his steps and had fed her deer meat. It was obvious that Sazi arrived imprinted and was experiencing breathing difficulties. The x-rays showed that Sazi was suffering from folding fractures to her ribs, right tibia, and left humerus. Such injuries result from a diet that provides inadequate bones in the food. This calcium deficiency did not allow her bones to develop properly, resulting in her weakened bones bending under the weight of her rapid growth. Despite immediate steps to improve her diet, the damage was too extensive for her release.

She is named for the Anasazi, an ancient Native American culture that spanned the present-day Four Corners region of the United States.