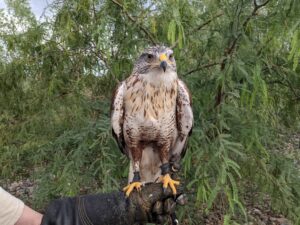 Pawnee came from a Missouri sanctuary as an imprint and was already trained for doing education programs.  We estimate that he was a year old when he arrived.

The ferruginous hawk is the largest and heaviest in his group (Buteo) and is found mostly in the western half of North America from the great plains through the western United States to northern Mexico.

Life span: Estimated life expectancy is up to 12 years in the wild and twice as long in captivity.

Babies/Nests: They build large nests of sticks, grasses, or old bones on hillsides, rock pinnacles, trees, or power poles.  An average of 3 – 4 eggs are laid and hatch in about 28 days.  The young leave the nest 38 to 50 days later.