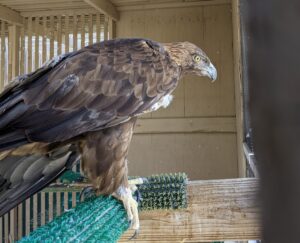 Orion was found on the ground along the I-17 near Flagstaff. In addition, having a fractured left wing, he was also found to have aspergillosis (Valley Fever). Despite the surgery, the damage to his elbow could not be repaired, limiting his flight abilities. The aspergillosis was treated but his breathing abilities were compromised. He could not be returned to the wild, so he became part of the education team.

He is named after the constellation Orion which is the Greek mythological hunter.