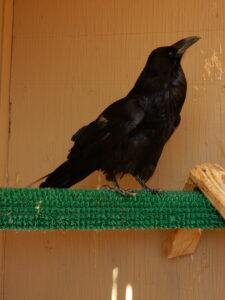 As a juvenile raven, Lenny was found begging in a schoolyard in Safford, Arizona in summer, 2000. Observation of Lenny once he arrived at Liberty, coupled with his reported schoolyard behavior, indicated that he was too comfortable with humans to be released.