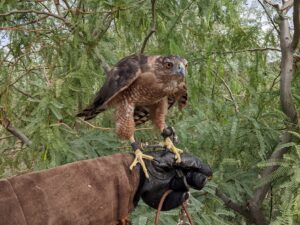 Monk was found on the ground as a fledgling by a rescuer who fed him chicken for several weeks but saw he could not fly.  Monk arrived at Liberty with a healed fractured left-wing and a crooked keel possibly due to diet-caused calcium deficiency. His diminished flight ability classified him as non-releasable.

Cooper’s hawks are common throughout the United States, southern Canada, and Mexico. They are considered among the bird world’s most skillful fliers.

Life span: They can live up to about 12 years in the wild and approximately 20 years in captivity.

Babies/Nests: Cooper’s hawks build nests of sticks and twigs in tall trees and lay 3 to 6 eggs each season.  Incubation takes 30 – 36 days and the young leave the nest 27 to 34 days after hatching.