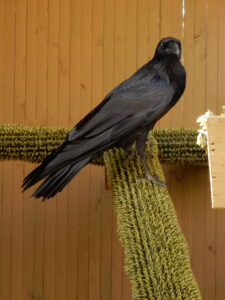 Clarence showed signs of being imprinted when he first arrived at Liberty Wildlife. He was placed with other ravens but had no interest in associating with them. Liberty personnel determined that he was too dependent on human interaction to be released into the wild, and he became an on-site education bird.