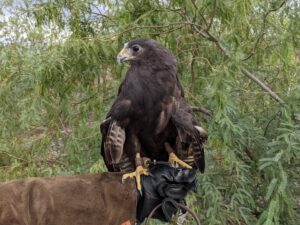 Rio arrived from Payson as an older nestling. He was found at the foot of a tree after having fallen from a nest and broken his left leg and injured his cere, the fleshy area where the nares are located. The person who cared for him fed him a diet consisting solely of egg yolks and vitamins which lacked the calcium needed for proper growth. As a result, his injuries were complicated by the development of folding fractures in his wings. Once at Liberty, Rio was administered an appropriate diet, but the damage to his wings could not be corrected. To straighten his injured leg, the medical staff had to rebreak it in order to have it heal properly. For several weeks, he had an external fixature attached to the leg which resulted in it healing well. The large gash in his cere could not be corrected. As a result, he has difficulty breathing and often breaths through his mouth.

The zone-tailed hawk is a dark tropical hawk that ranges from the southwestern United States (Arizona, New Mexico, and Texas) through Mexico, Central America to central South America.

Life span: Because the zone-tailed Hawk is so uncommon in the U.S., little research is available in general. No information is available on the lifespan.

Prey: Its most common prey consists of birds up to the size of quail (47%), large lizards and other lower vertebrates (33%), and small rodents such as ground squirrels and chipmunks.

Babies/Nests: Stick nests are usually built in tall trees along main rivers and canyons. The female will lay 1 to 3 eggs with the typical clutch consisting of 2 eggs.  Incubation is usually for 35 days, and the young fledge in 42-49 days.