Happy fall…really, it is fall.  It seems like the seasons in Phoenix go from tepid to torrid, arid to almost monsoony.  Ironically, today is the first rain I have had in many months.  But, the seasons, they go ‘round and ‘round. It isn’t necessarily the temperature or amount of daylight that defines seasons at Liberty Wildlife…it is the activity.  For us fall is the best.  Winter represents a bit of a lull if you don’t count the birds injured by bbs and pellets from newly acquired guns at Christmas.  (Folks please teach hunting ethics with the gift.)  Spring bursts forward with greening up, popping flowers and everything gearing up for breeding season.  This verdant and prolific time rolls very smoothly into orphan season…a time of endless activity in a pretty challenging out of doors climate. It is also a time when animals might need a little help from their friends.  They have plenty of friends at Liberty Wildlife.

Then there is Fall…blessed Fall when the temperatures begin to drop, slowly ever so slowly. It is a time when the ambient air doesn’t scorch. It is a time when orphans are being freed to make it in the world after a second chance afforded to them by a small staff and the efforts of hundreds of volunteers.

These folks deserve a special kind of award.  There is neither an Oscar nor an Emmy given for rising early in the defeating heat to lumber into a sweaty, odiferous, critter filled environments to make sure all of these orphans have food, water, clean enclosures, flight time, etc.  No award exists but there should be one…there is no glory, no thank you from their charges who spend most of their time staring with scared eyes, angry eyes, resigned eyes.   And, there isn’t a big fat paycheck at the end of the week to repay for the hard work.

No, none of the regular perks apply.  But, there is one thing that can make it all worthwhile and it is happening in the Fall…the blessed Fall. This is the time of releases.  While releases go on throughout the year, the fall represents the largest effort to release the orphans.  I would be just guessing, but I think there will be 3000 or more releases, and volunteers who have done the work get first chance to participate in the very special experience. 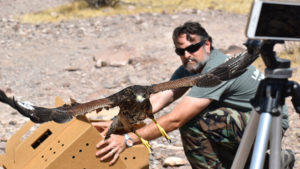 No matter how many times you release an animal, it never gets humdrum.  It is an emotional high.  It is an exhilarating time.  It is a rewarding time.  Some, of course, are more fulfilling.  Those special cases where all of the odds were against the survival of this particular patient, but its inner champion surged forward and with a little help from friends, it fought its way to release, to freedom, to continue the spark.  From total vulnerability to an “I’m outta here” smirk, they are free to make it on their own.

They don’t send a resounding thank you.  Occasionally, there is a circling over head or a perching in a nearby tree while it gets its bearings, but the real thank you is a strong flight and an obvious desire to melt into the habitat it belongs to.

Yes, “the seasons they go ‘round and ‘round; the ponies they go up and down; we’re captive on a carousel of time…in the circle game”.  We will continue to do what we do year ‘round.  We do it for you.  We do it for the animals.  We will continue to do it and because we do, we are allowed to experience the total thrill of success, of release, of completing the circle.

I think we can say the 2019 Baby Bird Season is over. The rate of intakes has fallen off along with the temperature but we are still about 400 over last year’s total for this date. If we beat 10K this year, it’ll be by just a few and I am really hoping we don’t. It’s just that I don’t want to have to ask John to add another column of digits to the software that he has already created for us (remember the Y2K panic?)
With the break in the constant activity at the intake window, we are able to take time to do some more education field, plus some long overdue cleaning and repairs. In the meantime, we are, as always getting in more injured animals that require our care. Even if it’s only 10-15 a day, it still runs the gamut of creatures from skunks and bunnies to owls, hawks, and falcons, and the “Window” is open from 8am to 6pm every day…

We held a semi-recurring “clean-up” day last Saturday. As with all entities, if you’re open for a given length of time, things get a little disheveled, especially after the busy season we just went through. This year, we got some help from a couple of local groups, notably the AF JROTC, Boy Scout Troop 440, and Girl Scout Troop 2325. The kids did a wonderful job clearing the wetlands pond and stream as well as hauling branches and other cuttings that had been accumulating around the facility. Thanks, gentlemen and ladies, for all your help!

The ultimate goal of all our work is to release all animals back to the wild after a successful rehabilitation. We are able to do this about 50% of the time which is better than the national average for these types of groups. Last week, we began releasing this year’s crop of rehabbed birds with the help of some of the volunteers that worked so hard to get the animals into condition to go home again. It was extremely gratifying to work the window and see so many smiling volunteers arriving to get “their birds” to be released. Jan and Alex were quite busy retrieving and boxing the various birds to be returned to the natural world, all of which had to be recorded for AZGFD and USFW reports. In all, 70 raptors (hawks, owls, and falcons) were added to the skies of Arizona last week, thanks to Liberty Wildlife and our volunteers!

A few of the notable animals that came in for help last week included a baby skunk that had been found in a pool in Scottsdale, another baby desert tortoise, a young pipistrelle bat, and an elf owl. The variety of intakes hasn’t slacked off, even if the total number has. We are still mostly outsourcing our mammals, including bats, but that will change as more of our ED animals move back outside with dropping temps.

Vet Night (Tuesday) is always interesting. There are usually three or four skilled veterinarians on hand and all the birds and mammals at the facility get examined and checked for progress or, if they are new patients, assessed for initial treatment.  As I tell the public bringing in birds, all animals get the best care that they could possibly imagine. (And all this with no health care insurance!)

Semi-periodically, our Education birds have a “Spa Day” when Jan and a helper checks and replaces worn jesses and anklets, assesses the condition and length of talons, and copes and shapes beaks that have become excessively long. Some of the birds seem to enjoy the attention while others…not so much. A lot depends on the bird and the specie. Naturally, trimming the tiny talons on a screech owl is easier than those on an eagle, but the technique is the same, it’s just the amount of muscle required that changes. Now, everybody is ready for the upcoming Education season!

We had a real treat last Saturday when Liberty friend Bert Feingold and his wife Betty arranged for a group of speakers from the Jerusalem Bird Observatory and the Israel Ornithological Center – Society for the Protection of Nature in Israel to visit Liberty Wildlife. These folks toured the facility and led a birding hike at the river, then spoke about their efforts to preserve both birds and all nature in Israel. Jerusalem is a critical stopover on the major flyway between Europe and Africa and is absolutely crucial habitat for migrating birds in the Middle East. Their efforts are both fascinating and astounding given the challenges they face. Perhaps there IS hope for the world…

Our founder, Dr. Orr, stopped by last week on her way back to Panama! She was transporting her personal birds to her new home and stopped by Liberty long enough to share pictures of her new grand daughter!