I try to keep my outrage contained most of the time.  Now, it seems like it is getting more and more difficult to do so.  Last week an incident tipped me over the edge.  It was exacerbated by a photo that I just can’t get out of my mind.  Here’s what happened to catapult my outrage to an uncontained level.

Our Hotline received a call from a man who felt he needed to take down a palm tree.  He called to ask about the nest of five barn owls that he knew lived there.  He was advised by the Hotliner that if he could hold off until the babies fledged, the outcome would be best.  If he felt that he couldn’t wait and that bringing down the tree was necessary, he should call the USF&WS to make sure that he had an “ok” to take the tree down with an known active nest of protected raptors in a nest.  If he had the ok to proceed, he was supposed to have the landscapers/tree trimmers remove the owls first and bring them in to us to put with our foster parents to raise for release.  That is what should have happened, and here’s the source of my outrage. 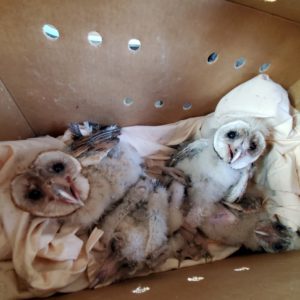 I can’t get those sad eyes out of my mind.

Barn owls are amazing creatures.  This mother barn owl had five babies in her clutch at the time.  After the time of incubation (29 to 34 days) she had to feed each baby around 6 mice a night, and she had to feed herself.  If you figure that the babies’ nesting period is 50 to 55 days that adds up to a lot of mice.  Do the math… on an average that is almost 1600 to 1700 mice for this brood…and the numbers continue.  If each of the five babies reached adulthood, and let’s assume at least two of them were females who themselves would raise clutches of babies. And, those babies ate a bunch of mice, etc.  You get my drift. Then perhaps we wouldn’t need the grim reaper, rodenticide, that doesn’t care who the target animal is.  It just might be another raptor, your cat or your dog that falls prey to second hand poisoning. Rodenticide, the indiscriminant killer used widely to keep the rodent population under control…what am I missing here?

The rest of my outrage is that despite the good that they do, they were individuals creatures that deserved to live and do their barn owl thing.  The man knew what the right thing to do was, but he decided, and I don’t pretend to know why, that it didn’t matter.  What mattered is that the tree was coming down.

Now we have at least four babies to raise with our foster parents.  And, you know those mice that the mother was going to remove from the neighborhood which just might be your neighborhood?  Well, now we will be buying mice to feed them until they are ready to be released.  It is what we do, and we are happy to try to make a difference in the lives of the remaining barn owls, but it is just upside down.  And, there’s the mother that dedicated much of her time to get off a successful nesting/breeding cycle only to arrive home to no home and no babies.

And, I feel outraged.

The numbers are up and down, but mostly up.  Last Thursday we were over 900 ahead of that date last year. It slowed incrementally over the weekend, but then the winds picked up and we were beset today with new arrivals. It’s almost all we can do to keep the berry baskets filled with paper towels (when we can get them) and keep the intake printer supplied with paper. Thankfully the temps have been relatively mild, but we all know what’s coming in the weeks ahead. Progress is being made on several projects and we’re all looking forward to the time when we can again think about events and getting the public back out to enjoy the Liberty Wildlife Experience. Until that time, all we can do is press on and keep caring for the animals that keep coming every day…
~~~~~~~~~~~~~~~~~~~~~~~~~~~~~~~~~~~~~~~~~~~~~~~~~~~~

It’s kind of defeating to see the same old injuries over and over again (see Megan’s outrage above) but I’ll just keep hammering on it until it stops. The lizard above was said to have been attacked by a house cat, and the desert tortoise was a chew toy for a dog. Glue traps claimed two more victims as the little baby bird and the house sparrow were caught with this device used inappropriately and against published instructions. (I’m always impressed by the presence of the entire food chain on these horrible things…) And last but by no means least, the white domestic duck whose leg was maimed by deep involvement with monofilament fishing line. I hate using graphic pictures of the effects, but maybe it will help get people to think before discarding this stuff in an unapproved manner. All we can do is keep trying to educate the public about these things.

Not a week goes by that we don’t take in a number of orphaned and injured birds of all species. From roadrunners with leg and wing injuries, to orphaned great horned and barn owls, the lucky ones find their way to our intake window. The true orphans are examined and quickly placed with foster parents of an appropriate species when they are determined to be injury free. If any trauma is found, it is dealt with by our volunteer vets and staff so they can rejoin their “friends” prior to being released.

We got a number of western screech owls last week. The various species always seem to come in “clumps”, probably due to the fluctuations of the migratory cycle. Last week was the screech owl bump! It probably helped that more people are not leaving home so they’re able to find these diminutive birds nesting around their houses. Almost any cavity, whether natural or man made appears to attract these small owls when it’s time to nest and raise babies.

It appears that kestrels are currently breeding around town. Coupled with dry, warm conditions, the occurrence of canker is always a threat, especially in kestrel families. The parents will bring doves and other small birds back home to feel their babies and these small passerines are often infected. This then passes among the entire clutch as the babies eat the diseased birds. We can cure it if we get the victim early enough and it hasn’t spread too far into he birds’ systems. The best hope the wild birds have is adequate rainfall to provide more water sources so they don’t all have to share. Another problem they face is tree trimmers who don’t understand (or care) that they are destroying a family home. The four little birds in the above pictures all came in when the nest was eliminated when the tree it was in was cut down. (see Megan’s article above and the feature picture in this posting)

Last week on Vet Night, Dr. Wyman and Jan removed two pins that had been installed in a great blue heron’s wing by Dr. Lamb. The pins were quite long and it took some time (and muscle!) to get them out. When they were finally removed, the wing was gently exercised to help the bird regain some degree of motion in the wing. It’s difficult to imagine the level of expertise and care this and all the animals receive at Liberty on a daily basis!

One of Liberty’s partners in our quest for sustainability is Avangrid Renewables. This company has been working with us for some time and recently provided us with a grant to provide, among other things, three large industrial evaporative cooler for some of our temperature sensitive animals. These large units now sit out side enclosures housing the California condor, a couple of our mammals, and the eagle pavilion. When I first got the unit running for the condor, I truly believe I saw the bird smiling (it was 106 that day!)
Thanks, Avangrid! 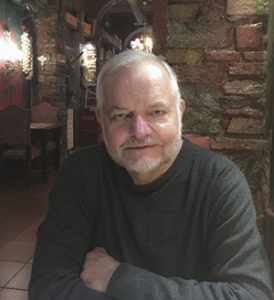