Last week I received an e mail from Pam who had discovered a small bird, unlike the ones she normally sees in her area. It was sitting all alone on her doorstep most of the morning. It seemed to her that it couldn’t or wouldn’t fly. She needed an identification and advice on whether or not to bring it in.

In my head I heard the lyrics to a Beatle’s tune, “Are you sad because you are on your own? No, I get by with a little help from my friends.” But I digress….

The photo (see below) showed the pretty, snappy looking little guy. It appeared to be small and vulnerable compared to the other back yard birds. It was identified as a MacGillivray’s warbler…a handsome yellow, olive and gray migrating phenomena. 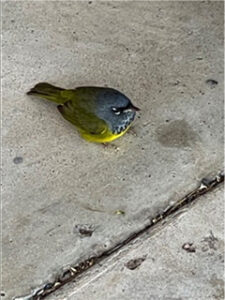 When you see one of these birds in the flesh and find out something about them, it is easy to wonder how it all happens. The MacGillivray’s warbler likes to hang out in dense thickets and forage for insects…that is when it isn’t participating in its annual migration.

Migrations happen for the most part because of food supplies not so much about hot or cold weather although when you think about it food and weather are definitely connected. This little warbler weighing in at a mere 0.3 to 0.5 oz. and measuring 3.9 to 5.9 inches long with a wingspan of 7.5 inches does some amazing traveling on those little wings.

The migration starts out as far south as the southern tip of Central America. When the right time comes they start their migration to the temperate forests of northern California and as far north as the Boreal forests of Canada…all on that little 7.5 inch wingspan. Migration is a very complicated matter, and the getting ready for it is a life and death preparation. First the bird must fatten up, and in this process things happen that we are just beginning to learn about…things like muscle and fat build up, shrinking organs, and super navigational skills and other complicated biological adaptations that allow them to take off on a journey twice a year…once to breeding grounds to reproduce and then back again to wintering grounds to prepare for the next Herculean endeavor.

This little warbler, while it travels valiantly, isn’t even the most impressive traveler. That award goes to the sooty shearwater. Statistics vary on the length of the travel, but it appears to go 1.5 times around the earth…maybe 39,000 miles as it does a figure 8 from Antarctica to Coastal California, Alaska, Japan and then returns to Antarctica…whew!

The point is because of the dangers presented many lives are lost during this feat. Travelers could be taken by hunters for the heck of it or for epicurean treats, fallen by weird weather patterns they aren’t adapted for, by changes in the environment eliminating fueling that they counted on, or the difficulties related to gathering materials with which to create nests and ready themselves for breeding and fledging young. And, then, they could fall due to simple stresses of predation.

So, when Pam asked if she should bring it in, I thought, “Sure”. We can at least examine him, provide food and water for a little bit of time, and then send him on his way. It is pretty devastating when they arrive at what has been a traditional refueling station and the cupboard is bare. Simply, they can become a victim of changes they haven’t had time to adapt to.

During migration, we see wonderful creatures…for a short period of time…and if it is possible or necessary, give ‘em a hand. You can too. Put out seed and suet feeders, nectar feeders, and turn off extraneous lights. Keep the cats inside and the b.b. guns in the closet. Do what you can to make the annual trek a success.

Be a friend, and you will be rewarded with a sneak peek at some of nature’s wonders and know that you were a part of an amazing process. Yes, they can make it with just a little help from their friends!

As a side note, when she approached it, it flew into underbrush seemingly rested up from its “nap” along the way.

We ‘re being hit with the full force of the Baby Bird Season with intake numbers soaring.  There is a constant stream of traffic from the window to Triage from 8am (sometimes before!) until 6pm (often much later!). Historically our busiest months are May and June so the wave has yet to crest. On June 1st last year we took in 199 animals and we hope NOT to repeat that record. If anyone who is reading this has a desire to help out, please go to the Volunteer page on the website and submit an application as we can certainly use all the help we can get! 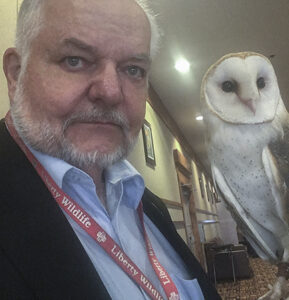 On a sad note, one of our Education Ambassadors of many years has left us. Soren was a barn owl that came to us as an imprinted orphan 10 years ago from another rehab group near Lake Havasu. He endeared himself to everyone who ever saw him and was a stellar member of the Education Team.

“Do you only do birds?” is a question we get a lot. And the answer is, “No, we help whatever animal needs help.” In our area, that includes tortoises and snakes of all types.

This little Western ground snake was brought in presenting some possible mouth trauma which, due to his size, was difficult to assess. He’s currently under observation.

Recently we took in a couple of tortoises that presented some shell pealing which is most likely caused by the underlying bone losing blood supply. Over time, the bone gets pushed out of the top of the shell by the keratin growing underneath. This might have different causes, one of which is trauma, another being infection. Fortunately, it appears to be largely benign.*

We certainly take in a sizeable number of orphan birds each year, from hatchlings to juveniles.  And even before they are hatchlings, Kathleen and the OC team tend to the tiny birds-to-be making several visits each day to check in on the eggs that populate our high tech incubator. Care is taken to ensure the eggs are kept in their arrival orientation and that proper temperature and humidity is maintained. Each egg is also marked with it’s arrival date so  they can be tracked for due date of hatching.

We are seeing the numbers of baby ducklings grow by the day, as well as the orphan Gamble’s quail which sometimes arrive in huge containers. The ducklings and quail now have their own outside enclosures that can provide safety and the proper amount of sunlight.

Other babies still must be hand fed for a while, like the baby doves, starlings, and this baby green heron.  The baby barn owls are cared for by our Medical Services team until they can be placed with foster parents.

Even though orphans and babies make up the bulk of our intakes this time of year, that’s not to say we don’t get in older birds that present injuries as well. One of our intakes recently was a first-year bald eagle from a nearby nest who left the safety of his family too soon. (see more in the banding item below). we also are treating a young red tail hawk with a wing injury as well as two immature Swainson’s hawks that were trapped at Luke Airforce Base recently. The difference in their plumage is very interesting being separated by probably one year of age.

We also have a baby great horned owl with a leg injury. This is sadly all-too-common as the little owlets have more mass than other baby birds and if they fall an appreciable distance, leg fractures are not unusual. Luckily we have some talented avian vets who are ready to pin youthful bones which heal quite rapidly.

We also took in a long-eared owl which appeared to be suffering from canker which is unusual for this species in our area. This might be an artifact of our continuing drought which forces all birds, both predator and prey, to share a decreasing number of water sources. And finally, a little flammulated owl is currently in our care and is so far doing well. Updates will follow!

For a long time, Liberty (and pretty much all rehabilitation groups) were not allowed to band birds that came in for medical work. The thinking was that if birds that had been through any kind of rehabilitation process were released and subsequently recovered, any tracking data using the ID bands was somehow corrupted by the rehab experience. Personally, I think a lot of useful data was discarded, but that’s just me. Recently, US Fish and Wildlife and Arizona Game & Fish Department have been banding birds that came to be in our care in efforts to track different species. In addition, solar-powered GPS locators have been attached in some cases to aid in the effort to follow the movements of certain raptors that pass through our doors. The latest species to be so monitored are Swainson’s hawks, one of which was tracked all the way to South American on its annual migration. Last week, two more birds were weighed, measured, banded, and fitted with satellite locators. These two, a juvenile bald eagle and another Swainson’s are pictured above. If any information is generated by these birds, we’ll let you know in a future update.

In addition to the usual array of injured and orphaned birds that we get in the course of a season, we recently received some mammals requiring some level of care.  Cotton tail rabbits are fairly frequent visitors and the Medical Services team gets plenty of practice in their treatment, so much so that we have a dedicated “Bunny Room” across from the Orphan Care ward.

In the past two weeks, we have also seen some not-so-common patients such as the baby coyotes seen above. Eventually we want to have an in-house ability to offer continual care for these cute little pups who, for whatever reason, got separated from their moms too early to be on their own. We actually have a separate Mammal Room, but currently don’t have the staff or the set-up to properly maintain mammals past the initial triage and stabilization they require. These two spent a short time with us and were then transferred to Southwest Wildlife near Carefree for longer-term care and maintenance.

The big bobcat was trapped and brought to us by the Phoenix Sky Harbor airport. He was also sent up to Southwest Wildlife for relocation to a more appropriate (and safer!) habitat.