Once again a denizen of the sky, bald eagle no. 19-0416 beat the odds.  Odds were that it wouldn’t live a year after hatching, but he did.  And, the odds were that he wouldn’t survive the accident that badly shattered his leg. 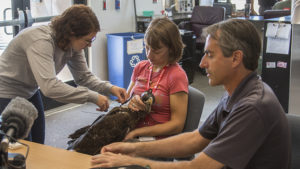 But he did with a lot of help from Liberty Wildlife veterinarian, Stephanie Lamb and a bunch of Liberty Wildlife volunteers.  Odds were that he wouldn’t be able to be released due to the severity of the damage.  But, he did as the 45 minute surgery was successful.  He can grab quite well with the rehabilitated leg, and that is the ticket to his success.  He reconditioned in a large flight enclosure for a few months until he was ready to resume his role in the environment.

Last Tuesday, he was set free at Horseshoe Reservoir and made his way across the lake without a lot of ‘thank yous’ and ‘see ya around’ good byes.  To those lucky enough to be a part of the release, just seeing him airborne and strong was enough.

Arizona Game and Fish put a GPS tracker on him the day before and biologists are hopeful that they will be able to gather data that has been previously difficult to get.  One of the things they are hoping to find is which areas are important for pre-breeding bald eagles. Up to now, the access to such an eagle was small.

For 19-0416 after hatching along the Verde River where he was banded in 2016 as a nestling, he succeeded in his travels until February of 2019 when he was felled by the severe damage to the knee from an unknown accident.  Had he not been noticed at a Queen Creek Dairy and brought to Liberty Wildlife for help, he surely would have died.  As it is, he will tell us a story of life of the pre-breeding bald eagle, and in a year or two it is our hope that he finds a mate and a great breeding territory and successfully adds to the eagle population.

Many thanks to all of you who made it happen with your skills, dedication, perseverance and a great deal of hope.  This makes the number of eagles helped by Liberty Wildlife soar to 105.

Let it be enough right now for us to revel in his new-found freedom.  What could be a better symbol and reminder of what we have to be thankful for than his freedom and independence as we celebrate the Fourth of July?

Happy Fourth of July everyone!

We took in 1,907 animals last month (June). That was in one month, and a short month at that. And what might be the most ominous aspect of that is, we have yet to see the first monsoon of this year. I guess that is the karma, be it good or bad, for having one of the most benign winter/springs we have had in recent memory. Except for some windy days, we had almost record mild temperatures right up through May and into June. But the bottom line is this: the biggest influx of animals is probably yet to come. Thank goodness our volunteers are up to the task, and the public has, for the most part, been willing to work with and support us as the numbers slowly rise. Hang on, the roller coaster is still going up the first hill…
~~~~~~~~~~~~~~~~~~~~~~~~~~~~~~~~~~~~~~~~~~~~~~~~~~~~

The second iteration of Liberty Wildlife Summer Camp went off much like the first week: with smiles and compliments all around. The kids got to interact with animals and nature on a one-to-one basis and learned a lot of fun stuff in the process. If our goal of having these kids take away a better appreciation for the wildlife of Arizona was attained, then it was well worth the efforts of Laura and her helpers!

As people find out where we are and what we offer in terms of a venue, more events take place here. We were again visited by students from the Pima Medical Institute. These are primarily veterinary students who get to see what work in their chosen field is really like. We also had a group of Arizona realtors hold an event at the facility last week. To a person, they all were duly impressed with our building and what we do here for the wildlife of Arizona.
Topping off the events, was a baby shower for Dr. Stephanie Lamb’s sister.  It’s always great to see one of “our own” sharing our facility with people about whom they care and this was a special event for sister and her friends!

Tuesday is “Vet Night” when several of our volunteer veterinarians come in to review and treat the patients that are in our care. These will be most of the animals that do not go down to Orphan Care but will require a little longer term treatment in ICU. It will usually be a variety of creatures from a spade foot toad that was missing a leg, several owls and hawks, assorted ducks (both mallards and domestics) and anything else that needs help. Caring for the animals once they go “Outside” can be problematic, as with the multitude of ducks we rehabilitate. Volunteer John Glitsos recently designed and built a new system to deliver water to the ducks without soaking the entire enclosure. The ducks seem to love it!

When we started our “foster care” program at Liberty many years ago, we had no idea it would be quite so successful. Prior to placing the first orphan GHO with Hogan, our orphans had to be fed and cared for by volunteers dressed in camouflage to prevent accidental imprinting on humans. Since then, hundreds of baby great horneds, barn owls, and hawks and falcons of all sorts have benefitted from being raised by their own species and have been released to the wild as human-averse examples of their own kind. We have several non-releasable adult GHOs including Wyatt and Josie, and Tyto and Abba on duty for the barn owl orphans.

Yet another small bird arrived stuck to a glue trap. This is one of the more easily preventable injuries we see since all it requires is that people read the directions which say “FOR INSIDE USE ONLY!” If they are used outside – or even in the garage with the door open – collateral damage is inevitable. The good news is, we have a new technique for removing birds and small animals from these horrible devices: chinchilla dust has replaced mineral oil as the preferred means to extract the bird from the card. Still, either reading the directions or just not using them at all would save lots of birds a bad experience…!

A lady from Scottsdale brought a duck to us last week with a fish hook in its mouth.  She had rescued the bird from a lake near her house and had named the duck “Dollar Bill.” We have teated many duck like this over the years (the first duck I ever rescued had a hook just like this!) and on Tuesday afternoon, Dr. Semick and Dr. Lapa were assisted by Joanie who actually removed the offending fishing gear. The duck was given some medicine and placed outside for recovery and observation. A few days later, the lady came down and picked him up, took him back to his lake, and set him free to rejoin his friends who seemed very happy to see him! She took the video of the release and has since applied to be a Liberty volunteer!

Look for 3 photos and a video