This is a time of milestones for us at Liberty Wildlife. Our intake of ill, injured, and orphaned wildlife for last year amazingly surpassed the year before—a record total of 12,919. Our end of the year report to US Fish & Wildlife Service and Az Game & Fish Department is over 700 pages printed, front and back! Fortunately, we can send it electronically.

Another milestone for us is that last week our Non-Eagle Feather Repository passed the mark for 5,000 orders filled. Statistically speaking, among many other things, the program is a winner that doesn’t get nearly enough attention. Let me tell you more.

Throughout their history Native Americans have maintained a special relationship with the animals in the natural world, particularly birds and their feathers. It is this relationship that forms the manner of Native American ceremony, dance, and song. Feathers are present in the celebration of birth, the passage to adulthood, the healing of the sick and the recognition of death…the cycle of life. Feathers are both sacred and revered. The feather is the most iconic symbol in Native American culture. 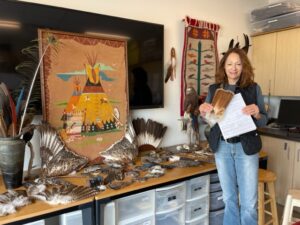 In October of 2010, the feather Repository sent out its first order. A red-tail hawk tail. Since that first order went out, the Repository has sent feathers to Native Americans representing 210 different tribes located in 45 of the 50 states. This month the Repository reached the milestone of sending out its 5,000th feather order.

In 2021, the Repository received 108 carcass/feather donations from 63 donor facilities located in 22 states. These include other rehab facilities, zoos, and other wildlife agencies nationwide. These donations totaled 1,311 bird carcasses and/or boxes of molted feathers representing 144 different species. With these donations we were able to fill a total of 411 feather orders in 2021 alone, and send those feathers to Native Americans representing 93 tribes located in 32 states.

The Repository achieves two very important goals, it supports Native American Culture and provides an alternative to the purchase of black-market feathers. We like to say that for every feather we send out, one less bird will be purchased illegally, one less bird will be taken illegally from the wild. The beauty of the LWNEFR is that it accomplishes this by recycling – recycling feathers. Or, as our motto states, “Giving new life to feathers that can no longer fly.”

Our Non-Eagle Feather Repository will be featured in an upcoming documentary about the impact of Liberty Wildlife’s various programs…anticipated to be released later 2022.

The intake total for the year is now up to 242.

We’re entering the time of year when everybody says, “This is why we live in Arizona!”  The temps are fairly moderate and we welcome almost any precipitation because we live in a desert. We can take the time to look around and appreciate the various, wonderful types of animals that live in our part of the world. I highly recommend anyone who wants to learn more about our wild neighbors to make a visit to Liberty Wildlife during public hours and meet our educational ambassadors up close and personal. Soon to be added to our collection is the California condor, a truly awesome bird that only recently was on the brink of extinction. I remember the first time I saw a condor that had come to us for medical care. It’s difficult to appreciate how impressive they are until you see one in person. This is only one of the amazing animals you’ll get to encounter on a visit to our facility. You will not be disappointed!

People probably don’t realize how much goes into preparing for each new season at Liberty Wildlife. Between the Education team, the Orphan Care crew, the Medical Services team, the Teen Guides…the planning seems endless. Each group has their own details that require coordination within the group plus working out procedures with the other groups with whom they all interact. One of the bigger pieces of the puzzle is training birds for their roles as ambassadors to the public. There’s also expendable equipment that has to be collected and prepared as well as cleaning various utensils and gear that has been stored since last Fall. The task seems daunting, but the volunteers and staff have been handling it for over 40 years now, so it all comes together like a well-oiled machine. Here are just a few shots of the “tip of the iceberg” that is getting ready for the new year!

Recently we received another California condor from the people at the recovery program. This is another condor that uncharacteristically does not present symptoms of lead poisoning. Instead, from the appearance of his injuries, he was most likely attacked by a golden eagle. There is a definite “food etiquette” with animals in the wild, and despite their size disparity, protocol dictates that the California condors will defer to the golden eagles in the chow line. Violating this hierarchy invites a savage attack, which may lead to injury or even death for the bird who tries to eat out of turn.

The injuries to this individual were a number of tears and gashes most likely the result of blows from the talons of a golden eagle who didn’t like losing his place in line to this fellow scavenger. The tip of his beak was also broken in the scuffle.  Fortunately for the condor, nothing vital was damaged. The sutures were checked on Saturday and were found to be in good order. If nothing develops over the next week, he should be able to be taken back north and released after next Saturday. This is vital as we are approaching breeding season.

We have been trying to add California condors to our permanent collection of animals for many years. We wanted to have at least one not only for education, but also for medical purposes. Since most of the condors that arrive have elevated lead levels, we frequently require fresh blood for transfusions. Having a healthy non-releasable bird to fill the role of donor will help us to be successful in returning more of these large birds back to the wild and the breeding population. Now that we have been approved to add two condors to our permit, we are building a new dedicated California condor enclosure to adequately house the large avians. I’ll update this as the construction progresses.

A short while ago, an adult golden eagle arrived from the Show Low area. She initially presented symptoms that appeared to be neurological in nature. She seemed to improve slightly but Jan noticed her balance was off, mainly on her left leg. An X-ray indicated a possible enlarged kidney on that side but was inconclusive. She was taken for a CT scan at Arizona Exotic Animal Hospital where Dr. Lamb works when not volunteering at Liberty. The details revealed by the CT confirmed Jan’s suspicion as it showed the enlargement was pressing on her sciatic nerve which may have been causing the issues she was having with her balance on that side. Surgery was then scheduled and performed by Dr. Lamb and several of the Medical Services volunteers. The cyst was drained and a sample was taken for a biopsy. The bird is doing well and we are currently awaiting the results of the biopsy.