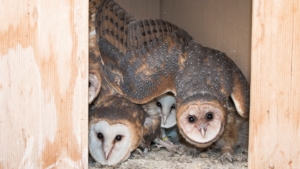 A Labor of Love

Sometimes seeming failures are NOT what they appear to be. Twenty years ago, back in 2002 someone from the caring public brought us an adult Barn Owl. He had suffered a broken leg, which in itself was fixable. However, the unintended consequence of the break was accompanying nerve damage, leaving curled and deformed talons on that foot. There was nothing to do but to remove the deformed talons, and the owl lived. Unfortunately, he was no longer able to be released. There are those who might say he should have been euthanized. At Liberty Wildlife, an otherwise healthy animal gets a second chance. If you continue to read, you will understand the impact of that decision. Titus was allowed a job change and opted to be a foster parent to other Barn Owls.

Then in 2005 along came Abba. She was also an adult Barn Owl who had a fractured wing that couldn’t be healed well enough for her to fly silently or at all really, and she too, was given the choice of becoming a foster parent. So in 2006, 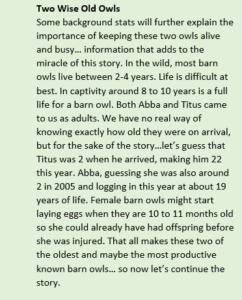 Titus and Abba moved in together, a happy couple, and for the next almost 16 years  fostered other orphaned Barn Owls. This is a very successful method of raising orphaned babies without any mal-imprinting from us humans. Mal-imprinting leaves the baby unable to identify with its own species and therefore leaving the animal non-releasable…what a waste!

Here’s where things get more impressive. Titus and Abba became foster parents from the first introduction…a match made in heaven??? They have successfully raised over 500 babies since 2006, and they raised wild and fierce babies who were successfully released back into nature with no trace of mal-imprinting.

So, the initial failure to release the injured Barn Owls back into the wild turned into one of the greatest successes of all time. Do the math… (and then realize this feat happens many times at Liberty Wildlife with other species, as well). These two Barn Owls, mated for life and assumed the roles that they are basically hard wired to do in nature, turning a seeming failure into the best possible other outcome.

Sadly, Abba died this week…very old and probably not up to another year of fostering and Titus, her mate of 16 years, became distraught. Besides beginning to lose his eyesight, he quit eating and shut down. The veterinarians examined him and made the decision that because of other problems with him, there would be no heroics, and they let him go. I am pretty sure that he and Abba will be flying free now to go to the place where all good things go.

Credit here goes first to the people who cared enough to bring in those two injured Barn Owls. The credit also goes to the veterinarians, the medical staff, and the volunteers who for the last 16 to 20 years have taken stellar care of these two “love” birds and all of their little charges, and to those of you who have cared enough to make a difference and a major impact on native wild animals by generously donating to their well-being.

I continue to be proud of this organization and all that we do. I hope you are too. Here’s to you, Titus and Abba! And all those brave, fierce foster parents just like you.

This is it; the last blog of 2022. The next time you read this, it’ll be the start of a new year and a fresh start here at Liberty Wildlife. Intake 0 will be a thing, though I can’t say it’ll last long. It means new animals and stories, new learning experiences and volunteers.

And, like any new year, it’ll come with new goals, and Liberty Wildlife has plenty. While I’m not at ‘liberty’ to say them at the moment, I promise when I can, you’ll be the first to know.

Growing up a military brat, there was always one constant; our visits to Phoenix, AZ. Both my parents grew up here, and with family still living in the valley, it made for an easy vacation spot. Despite the hours it took, we usually took a road trip, and my brother and I were just as merry to listen to our Walkman’s as we were watching the world pass us by.

Which is always how I knew we were close to my grandparents’ house. At some point, I’d look up and the saguaros had appeared. Even then, I loved them, though I couldn’t say why. Now I can tell you it’s because of their strength in this desert; how long it takes for them to get that tall, with their mismatched limbs and thick skin.

I believe it’s part of the reason why our partnership with Desert Botanical Garden is so wonderful. Here at Liberty Wildlife, you come to see our native wildlife and learn how to make a better imprint in this world we share. At Desert Botanical Garden, you get a chance to learn about our native plants—many that are only found in Arizona—and take that knowledge back out in to the world with you.

It’s the best of both worlds, in a way, and what better time of the year to do that then during the holidays?

While I definitely recommend a trip to the gardens during a bright, chilly day, there’s something gorgeously serene about visiting at night. It becomes a different world, what with all the thousands of luminarias brightening the trail. Add in the sculptures, artwork, flute players and more to liven up the evening, it makes for a wonderful date—or family—night.

So take a trip to the Desert Botanical Garden before 2022 is over, and remember to take a minute to stop at your favorite rehabilitation centers booth, too!

A few times a week, volunteer veterinarians come to Liberty Wildlife to assess the animals in our care, and help get them on a path to recovery. Veterinarians currently practicing, and students in medical school, work alongside our medical volunteers and staff to create a plan based on the animals injury and needs. For some animals, the path is a quick one; for others, it takes weeks or months for the injury to heal, and sometimes even longer to build up the strength to return to the wild.

Intake 10,958—a Great-Horned Owl—is on a long road to recovery. Dr. Reeder found scabbed lesions beneath the tongue (likely due to dehydration); a puncture on the right wing, as well as a swollen right eye. The wound on the wing was flushed with saline and left unwrapped to help with the healing process and swelling. An antibiotic and anti-inflammatory were prescribed to help as well.

Which leads to intake 10,978; a victim of a gunshot, this Red-Tailed Hawk has been resting for a few days. With a callus already forming on the wound (the blurry stuff around the break and bullet), the veterinarians will have to pull out the bullet, as well as put a pin in to help the bones heal. Which is tricky with a break with multiple fractures.

Thankfully, we have an amazing team here at Liberty Wildlife. Between the volunteers, staff and veterinarians, both are in good hands this holiday season.

Like the Desert Botanical Garden, The Verde Canyon Railroad runs all year round; you don’t have to wait for the holidays to enjoy this historic route through Arizona. But, much like the Garden, there’s something about the cold and the snow and the holiday lights that bring a different kind of joy to this ride. And the depot—located in Clarksdale—is littered with holiday décor; luminarias, giant ornaments and a birds’-eye village give you plenty to see and do while you’re waiting to board the train.

Liberty Wildlife is there, too, and not just with any Animal Ambassador; one of our Bald Eagles hangs with you and Santa’s Elves, giving you plenty of opportunities for some amazing photo-ops.

Once you’re boarded, though (and you do have to board because that’s the whole point!), you’ll take an hour-long train ride to the North Pole. Mr. and Mrs. Clause are there to greet you upon your arrival, where you’ll get to visit Santa’s workshop, a Reindeer Flight School and so much more.

If you’ve never made the journey to Clarksdale, this one comes highly recommended. It’s an experience you’ll never forget; plus, the Verde Canyon Railroad is the only train in North America where you can sit inside or outside for the price of one ticket. It’s a total ‘steal’, and Santa can’t even be upset about it because he wants to see you there!

Tickets are limited; check them out here and get yours today!

There’s a busyness to life today that’s hard to describe; for most of us, we’re always on the go. Work/life balance is a prominent discussion in the workforce; technology keeps us constantly aware and alert; after curricular activities, not including your kids and their own things, keep us ever busy after a long day at work…this list could go on and on and on.

With all the constants in our lives, it can be difficult to find the time to do things we love. Those little hobbies that make our hearts sing and put a smile on our faces. That give us purpose past the life we’re already leading.

It’s why having upwards of 300 volunteers here at Liberty Wildlife such an incredible thing. From Daily Care to Rescue Hotline to the Intake window, every single one of our volunteers somehow find time in their busy schedules to make it here and keep us running. And let’s be honest; without them, we wouldn’t be here. We wouldn’t be capable of taking in 11,000 animals, of releasing a great number of them, of sharing those animals’ incredible stories.

To think I started as one of them makes me more proud than words can say; I know a great deal of them who feel the same.

Though we say if often, I’ll say it again…thank you. From the bottom of our hearts here at Liberty Wildlife, thank you for spending your time with us. We see you, we appreciate you, and we look forward to your journey ahead.

Without further ado, here are the grand finales of 2022:

Someone adorned my Christmas Cactus with googly eyes; I still don’t know the culprit, but it certainly gives them life! (1 picture)

Bar Mitzvah at Liberty Wildlife on a chilly, but gorgeous, Saturday evening (5 pictures)

Even with a new year coming, we’re still open for Public Hours; we’re here Wednesday, Saturdays and Sundays from 10am-1pm. Plus, we’ll be at the Desert Botanical Garden and the Verde Canyon Railroad through the rest of December. We’d love to see you before the end of this year…but in case we don’t, Happy Holidays and have a wonderful New Year!

1 comment(s) need to be approved.
2 replies 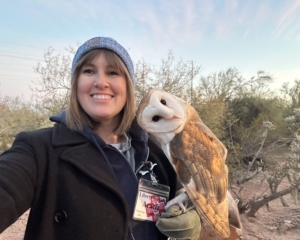