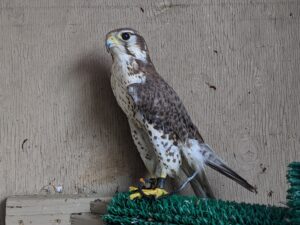 Ra arrived at the Nature’s Educators facility in Colorado in 2017 with an injured left wing. The injury required that the wing tip be amputated, classifying him as non-releasable. Ra was transferred to Liberty Wildlife in 2020 as an adult, where he became a member of our education team.

Life span: The most common estimate of the average life expectancy of the prairie falcon is between 2 and 5 years, substantially lower than the peregrine falcon. Other estimates range from 13 to 20 years.

Prey: The prairie falcon specializes in medium-sized mammals and birds. Rodents, small rabbits, small hares, and small to medium-sized birds such as mourning doves and quail are its primary prey. They will also hunt ground squirrels, snakes, lizards, and insects.

Babies/Nests: Typically, prairie falcons nest on a cliff face using a ledge, cavity, crevice, or an abandoned nest of eagles, hawks, or ravens.  The average clutch size numbers 4 to 5 eggs.  The incubation is between 29 to 34 days. Young prairie falcons leave the nest 5 to 6 weeks after hatching.