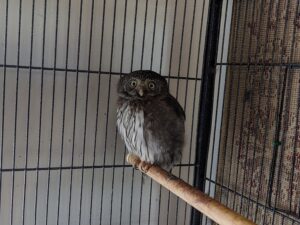 Newton was transferred from a rehabilitation center in Montana at our request to become a remarkable addition to the education team. He had been brought to the Montana facility as an adult with a traumatic injury to his right wing, which required a partial amputation of that wing. His inability to fly classified him as non-releasable. Since his injury occurred when he was an adult, we do not know his exact age.

Northern pygmy-owls are found in western North America from southeastern Alaska and British Columbia south through the western United States, and throughout most of Mexico. They do not migrate.

Life span: There is little reliable data on the life span of this species. The only known recapture of a banded northern pygmy-owl occurred in 2016 in Oregon. It was a male and at least 3 years, 11 months old when it was recaptured and rereleased.

Prey: Unlike nocturnal owls, it hunts primarily by sight during the day and dusk and not at night. Their preferred foods include birds, mice, and large insects with studies indicating that about 90% of their diet is comprised of small mammals and birds.

Babies/Nests: Northern pygmy-owls lay their eggs in cavities, lined with feathers, leaves, or other debris. They never create their own cavity but rely on cavities hollowed by woodpeckers or rot.  The female will lay 2 to 7 eggs and incubates the eggs for 28 days. The young fledge 3 to 4 weeks later.