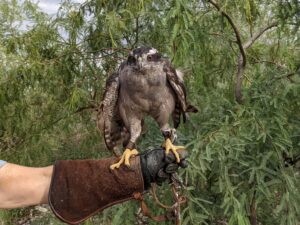 The veterinarian who brought Cercei to Liberty Wildlife had kept the injured bird until the wing healed. Our medical examination found that the left wing also had damage and there was severe feather damage to both healed wings. Determination of her flight abilities had to be delayed for a year until new feathers came in following the annual molt. During the subsequent flight testing, Cercei still was unable to fly any distance. Additional x-rays showed that during the year, both right wing and left wings had changes to the bone structures. Despite physical therapy, the anomalies continued to limit the extension of her wings, allowing her to fly only short distances. Non-releasable now, Cercei was reassigned to the education team.

Description: In addition to being North America’s largest accipiter, the northern goshawk is the most widely distributed accipiter in the world.  They are found throughout the mountains and forests of NorthAmerica and Eurasia.

Prey: The goshawk is a powerful hunter capable of killing an extremely wide variety of birds and mammals of varying sizes. Depending on where they live, prey species include mice, shrews, chipmunks, jackrabbits, squirrels, raccoons, foxes, geese, doves, woodpeckers, and crows. Known as a predator of other birds of prey, northern goshawks have been documented hunting red-tailed hawks, owls, and kestrels.

Babies/Nests: Northern goshawks usually choose the largest trees in a stand for nest sites, placing the nest next to the trunk on a large horizontal branch or in a primary or secondary crotch.  Goshawks often re-use nests from previous years or appropriate nests of other accipiters. They are monogamous, and pairs typically lay a single clutch of three to four eggs each year. The incubation period lasts 35 to 38 days and young goshawks fledge when they are 36 to 42 days old.

Herida/Condición: Fractura a su ala derecha