I had just returned from a flight on a beautiful Fall Saturday afternoon. There was a message on my answering machine (remember those?) from Liberty Wildlife asking if I could pick up an injured hawk in Casa Grande. I eagerly said “YES!” and with directions in hand, drove south in my little pickup. The gentleman already had the bird contained and I peeked inside the box and got my first glimpse of an agitated Harris’ hawk. I put the cardboard box on the jump seat behind me and headed north to Liberty on my first real rescue call.

This was easier than I thought.

The drive up to this point was uneventful but as I approached the Scottsdale-Tempe border the traffic picked up considerably as there was an ASU football game at the stadium. I was crawling north up Scottsdale Road and I came to a stop when I heard some bumping from the box behind me. I turned my head and saw a Harris’ hawk glowering  back at me! The bird had somehow opened the box and was now half way out of the container. The truck had a small sliding window which was open and before I could react, he was out of the box and then out of the window! I had a deck cover on the back of the truck and as I stopped for a red light, the bird hopped down the deck, off of the driver’s side of the truck, and ran across three lanes of traffic into a parking lot on the far side dragging his injured wing. I was in shock and I didn’t know what to do! My first rescue and it had escaped! They would never call me again!!

(They would call again…)

Just then the light changed and I was able to make a U-turn and pull into the parking lot of an abandoned motel where I had seen the bird scampering.  I frantically scanned the area and finally saw him in the next parking lot. After chasing  each other around the lot for several minutes, he attempted to elude me by going under some oleander bushes. As I approached the frightened bird, he fell on his back and presented his talons. I subsequently learned that this is a classic raptor defense maneuver and with the proper equipment, it can be exploited by an experienced rescuer.

(I had no equipment.)

Being new to this, I figured that with the beak on the far end, I would be safe grabbing the bird’s feet.

As I grabbed his feet, he grabbed my hands – and he was far better equipped for grabbing than I was.

With his talons disappearing into my flesh, I knew I was in trouble. Each time I moved, he tightened his grip. I was totally trapped! I then stopped struggling and thought about when my pet cockatiels get scared and panicky, I just talk to them and it calms them down. This is a bird, so maybe it’ll work with this guy too. So I started talking to him in a slow, low voice, telling him I wasn’t going to hurt him, and everything would be ok, and…amazingly, he released his grip with one foot! I slowly wrapped the wing on that side around his leg and kept talking to him. Pretty soon he released the other foot and I wrapped the other wing around that leg and picked him up. When I got back to my truck, I gently placed him back in the box and then firmly closed it up, placing some heavy stuff on top! We then proceeded to complete our trip to Dr. Orr’s and Liberty Wildlife. Of course, my hands looked like I had been playing patty-cake with a wood chipper, but my first rescue was complete! 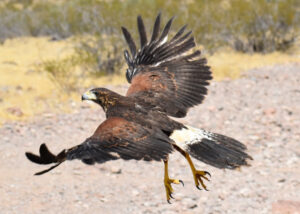 The black-tailed jackrabbit is a critter supremely adapted to desert life. Enormous ears pick up on danger lurking from any direction, and large eyes located at the top of his head scan for predators on the wing.  At the slightest hint of danger, the jackrabbit freezes, its dun coloring allowing it to melt into desert hues.  If the predator advances the jackrabbit sprints away at speeds up to 35 miles an hour. He bounds 15 feet in a single leap, skyrocketing over boulders and shrubs. 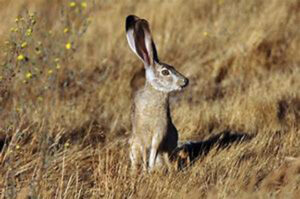 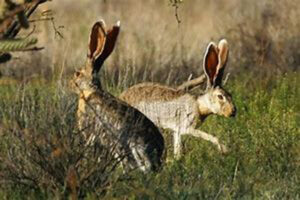 Oversized ears also reduce and regulate body temperature. Two species of Sonoran Desert jackrabbits, black-tailed and antelope, are mostly nocturnal animals that rest in the shade during the searing heat of summer and browse at nighttime. These herbivores feed on grasses, forbs, mesquite leaves and beans, and cacti. Cacti supply the moisture they need.

Despite constant danger from predators such as owls, coyotes, bobcats, rattlesnakes, and human hunters, jackrabbits meet up in social groups to graze at night. Especially on moonlit nights, up to 25 jacks gather together to feed, finding safety in numbers. These animals may be required to travel several miles every night to find forage.

Courtship between a jack and jill is an action-packed affair, as the two chase, bound, and leap over each other.  The mated pair will produce one or two babies weighing only a ½ pound at birth. The young are born fully furred, with eyes open, and can run with their parents soon after birth. The youngsters stay on with their mothers for several months before becoming independent. Jackrabbits breed throughout the year.

There are 56 known species of lizards in Arizona, 16 of which are found in Maricopa County.  They come in a variety of sizes, colors, and diversity of habitats. 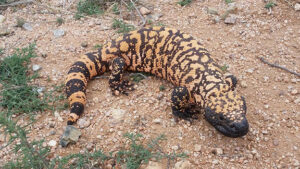 The Gila monster is probably Arizona’s most-well-known lizard, one of two venomous lizards in North America (the other is the Mexican beaded lizard in Mexico).  The venom is delivered through grooves in the teeth. Bites are painful but rarely fatal to humans.  They live in elevations up to 5500 feet, a variety of habitats, and spend most of their lives underground, only coming above ground for 3-4 weeks per year for food, mating, and egg-laying. 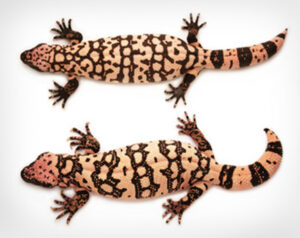 Gila monsters from the northwestern part of Arizona usually have a banded pattern. Those from the south-central and southeastern part of Arizona usually have a reticulated or mottled pattern. Young from all parts of the state are banded. (see photo above). Under Arizona State law they are protected against “harming, pursuing, hunting, shooting, wounding, killing, trapping, capturing or collecting.” 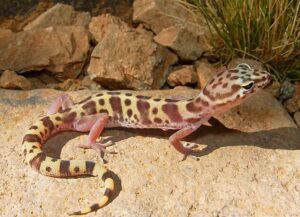 The western banded gecko is strictly nocturnal, hunting for insects and spiders. They do not have villi (toe pads) on the bottom of their feet so cannot climb like the Mediterranean Gecko. They are small. The pupils are vertically elliptical. The tail becomes plump when the gecko is well fed. 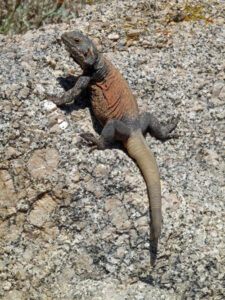 The Common Chuckwalla is a rock crevice-dweller. It is often seen basking on boulders, outcroppings, and rock piles during the daytime. When threatened it retreats into a rock crevice and inflates itself with air until it becomes securely wedged. It feeds on a variety of plants, but will occasionally supplement its diet with insects. They measure up to 9” from snout to vent. 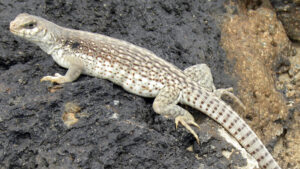 The Desert Iguana is in the same family as the large green iguanas of Mexico and South America. This lizard often remains active through mid-day when high temperatures force other lizards to seek shelter. It hibernates during the cold months of winter and late fall. They measure 4-6″ in length and eat plant leaves, buds and flowers, and some insects. 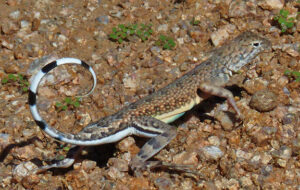 Zebra-tailed lizards are found at sea level and up to 5000 ft. They are heat tolerant and active during the day. It does hibernate during the cold months of winter.  When approached by a predator it often curls and wags its tail over the back exposing the black and white “zebra stripes”. Both males and females are territorial and will head bob and do push-ups if threatened. Its diet is extremely varied: grasshoppers, bees, caterpillars, ants, spiders, small lizards and plant material. 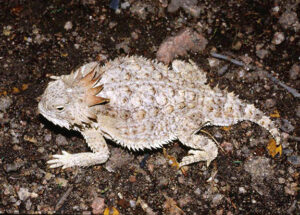 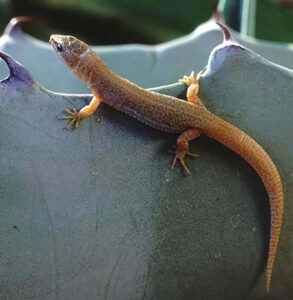 The Arizona night lizard is small, measuring up to 2-1/4 inches.  It is found in habitats up to 7000 ft in elevation. It favors rock crevices.  It is rarely seen during the daytime. They eat ants, flies, beetles, a variety of other insects and spiders. 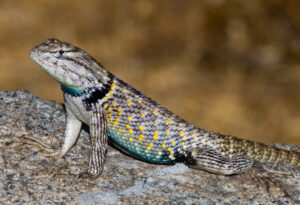 The Desert spiny lizard is a colorful daytime lizard found in elevations up to 5000 ft. Males have two large, bright, blue-green patches on the belly and a blue-green patch on the throat. They can measure up to 6 “.  They eat ants, beetles and small lizards. It hibernates during winter.  It often bites when captured. They are sometimes found in male-female pairs. 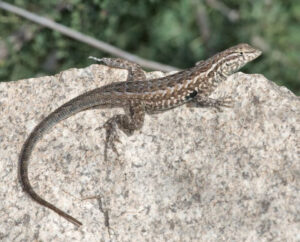 The side-blotched lizard is among the few reptiles likely to be active during the winter months in the Sonoran Desert, coming out of underground burrows when the sun is warm.  They are out during the daytime.  They have a dark splotch just behind the first pair of legs with a barely visible blue-green coloration under the chin. They are very common.  It is a small lizard measuring up to 2-1/2 “.  It is found up to elevations of 6500 ft.  It is an opportunistic hunter that waits for prey to wander within close proximity. Prey includes a variety of insects including grasshoppers, beetles, ants, spiders, scorpions, and termites. It will occasionally eat plant material.

Have you ever moved? Some animals move too! If an animal moves from one place to another for weather or food, it’s called migration!

Many mammals, insects, fishes, birds, and other animals move from one place to another.  Take a look.

September is a big migration time for millions of songbirds heading south.  Many migrate at night. The next full moon is the perfect time to watch for them. Click on the link to hear more and check out when the next full moon appears!

Meet Penelope, the osprey who was tagged to show her migration journey from New England to South America.