The world exists by degrees.

A day is a lifetime for a fly with an age-span measured in hours. A three-pound raptor is practically its own ecosystem to the pinhead-sized feather mites calling it home. The square meter of soil beneath your feet might hold a subterranean city worthy, in miniature at least, of any human metropolis.

We tend to view ourselves as the physical measuring stick with which we gauge the worthiness of our surroundings, but the reality is that practically every bit of air, earth, 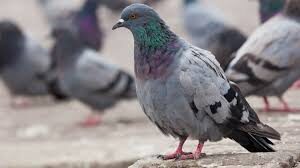 water, flesh, and bone, is teeming with an array of lifeforms, from the microbial level on up. We are never really alone. There’s always something underway, some process that’s either invisible or imperceptible … or that’s waiting there to be noticed and appreciated if we stop to take a look. Pigeons in your local park aren’t loitering; they’re working, cleaning up organic refuse and keeping the urban landscape far tidier than it would otherwise be.

Unsung armies of ants, far from acting as the bane of picnics and kitchens, aerate the soil and clear out the dead and decaying matter that nature (or us) 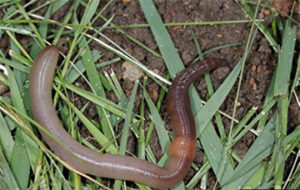 leaves behind. Worms wriggle their way toward the same purpose; just as meaningfully, the perpetual, lethal dance between predator and prey keeps populations balanced, letting the wild machine hum on with long-honed precision.

Caretaker animals aren’t the most glamorous. Vultures do themselves no favors by vomiting rotten meat at the first sign of lethal danger or slight annoyance. Yet they play one of the most important parts in nature’s organization, that of undertaker: death may be a natural precondition to fuel new life, but it needs some help along the way. Everything 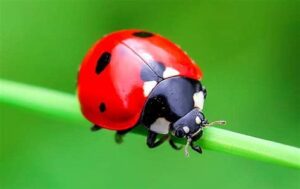 has its purpose. Ladybugs are adorable, but they also work vigorously (and viciously) to keep plants safe from marauding pests. Butterflies, moths, and bees act as pollinators while animals of all stripes spread seeds throughout the world. Maintenance is never the most flashy of jobs, but it is the most critical, because any system, natural or otherwise, will break down if not sustained. As the planet’s apex species, we have the capacity to help, hinder, or leave the system be. We typically do all three, sometimes in the course of a heartbeat and often without giving it thought one way or the other.

We’ve amply demonstrated our ability to devastate environments, sometimes accidentally, sometimes with cold intent. We’ve also proven that we have the capacity to curb our worst impacts, to neutralize ourselves, and sometimes even to add positively to the natural cycles around us. Worms engaged in composting have no capacity or need to philosophize about what they’re doing; they simply serve their role. We don’t have the luxury to be as single-minded as the dragonfly lurking by the pond, keeping the mosquitos at bay; all the same, we share a responsibility to take ecological health as seriously as they do. If we do much more damage, we can also have a significantly greater impact on environmental wellbeing as a whole. We can take a lesson from the things all around us, and from their patterns of cycles within cycles, seeing where the system is out of whack, and where and how we might fix it. 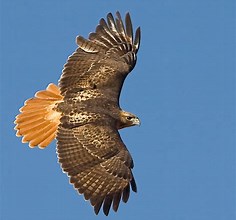 In the end, it’s not the beauty of a Red-tailed Hawk or the sheer grandeur of a Golden Eagle that provide them with worth; it’s the purpose they serve as natural checks on prey species populations. It’s the fact that leftovers from a successful hunt provide fuel for the ants, the worms, the scavengers big and small, the soil itself: the unintended cooperation of a host of organisms keeps the whole thing running. The world is maintained through billions upon billions of interlocking, living, breathing gears. It’s inevitable that we as human beings, with the size of our population and the scale of our ecological footprint, knock a few out of whack (or a few thousand, or a few million…). What matters is how we respond to it: how, and whether, we fill the gaps.

Sandhill cranes are a reassuring target for novice bird watchers; being large and loud and congregating in great numbers.  In fact, tens of thousands of sandhill cranes flock to 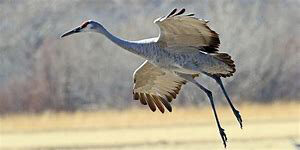 wetland resting areas in Southeast Arizona during their long migratory journey.  Drive to Whitewater Draw in January or February, head on out to the viewing platforms in the afternoon and you will see cranes.

They first appear as dark specks against the blue sky.  Approaching in long ragged lines the gangly cranes begin to take shape, and then you hear the trilling cries.  As they prepare to land near the marshes, the cranes transform from the classic wingspread profile to a more vertical expression of the bird, featuring a long neck and dangling feet.  The landings themselves are graceful and assured. 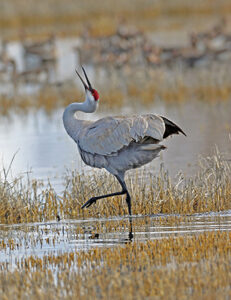 In this wetland setting we are able to move beyond the mere identification stage of bird watching to the more interesting observation of the activities of the animals.  The sandhill crane exemplifies animated grace. He stabs energetically at a great variety of food items, from grains found in fallow fields to insects, reptiles and plants.  During mating ceremonies and sometimes just in random bursts of energy, a sandhill crane performs a funky dance involving leaps, twirls and exaggerated dips and lifts of the head.  Other cranes nearby watch this performance in a bored manner.  The distinctive red cap of the sandhill is not scarlet feathering but an area of red wrinkly skin.  The crane announces excitement or alarm by flashing this red patch which can stretch back from the forehead to cover the entire head of the bird. 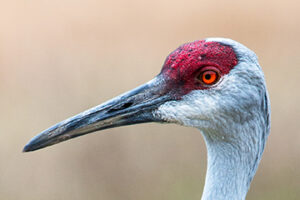 Sandhill cranes are thought to mate for life and to travel in family groups.  Indeed, you can observe this as they prepare to settle at Whitewater Draw, where birds break off from the incoming flock as pairs to seek a space among the others.  These cranes generally live to be about 20 years old, choosing a mate when they are between the ages of two and seven.  Their nest is a large mound of sticks that may float in the shallows or be anchored bankside.

The population of sandhill cranes is healthy for now.  People report sightings, take photographs and videos and come out to observe and enjoy the spectacle of the migration Cranes can be sighted across a broad band of the southwest in the winter to the northern reaches of the Rocky Mountains, the Midwest, Canada, Alaska and even Siberia in the summer months. You can enjoy them from the comfort of your own home of course, by pulling up YouTube and marveling at the dance of the sandhill crane.

Birds of prey exhibit an extraordinary variety of hunting techniques and styles. These are generally dictated by the type of prey targeted, the habitat of prey, and specialized hunting “equipment” of the raptor. 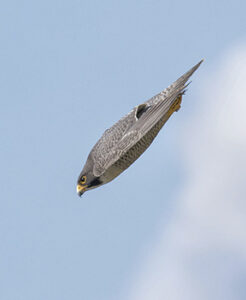 The Peregrine Falcon targets open-country birds such as ducks and pigeons.  The falcon needs speed and the element of surprise.  Their wings are powerful, long, and pointed.  They will sometimes fly low at high speeds over flocks of birds flushing them into the air.  They will dive bomb or “stoop” from above their prey, often with the sun behind them.  They strike their prey in the air at speeds over 200 mph.  Long toes enable them to catch prey as it falls. 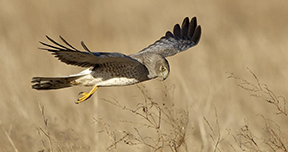 The Northern Harrier hunts in fields and marshy areas which lack good perches to scan for small mammals and birds. They have long wings and tails to help them fly low, coursing back and forth over fields.  They also have a special owl-like facial disc that helps to collect the sounds of prey in the grass below them. 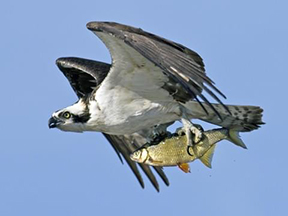 The Osprey hunts by soaring, hovering over the water, and then diving to grasp fish with long toes and talons as well as special pads on the bottom of its toes to ensure a good grip.  While in the air, to cut down on air drag while flying to a perch to eat its prey, it will turn the fish to face head forward, tail back. 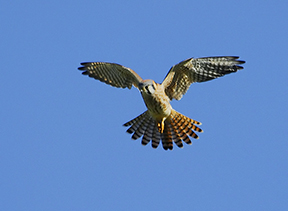 The American Kestrel hunts a diversity of prey such as insects, small mammals, birds, and reptiles.  It uses a variety of techniques such as perching, aerial pursuit, and amazingly can kite (hover in one spot) while in the air while it looks for prey. 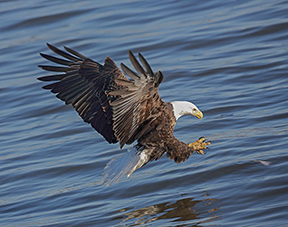 The Bald Eagle hunts fish, mammals, and water birds.  Using its excellent eyesight, it will either perch or soar while searching for prey. Once prey is spotted, it uses speed, surprise, and long powerful talons to swoop from the air.  The Bald Eagle is also notorious for pirating another bird’s food, especially from osprey. 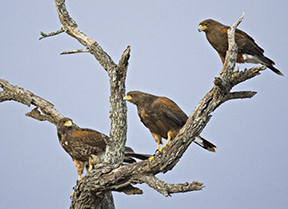 Harris’ Hawks are known for living in family groups and so will use cooperative hunting to run down and catch their prey.  They have a wide variety of prey including rabbits, rats, and birds.  The hawks will split up, one group chases and the other group will go ahead to ambush their prey. 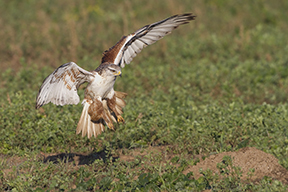 The Ferruginous Hawk is a hawk of the plains where perches are few and far between.  They will soar to hunt, but more commonly they will use stealth and patience on the ground waiting by a rodent or prairie dog burrow.  When the dirt moves or the rodent peeks above ground, the unusually small feet of the Ferruginous are perfect for reaching down into the burrow to grab its prey.  The hawk’s legs are also feathered down to the feet to protect from rodent bites.

To be as successful as possible, raptors have evolved specialized bodies and heightened senses to spot or hear prey. The next time you are watching a bird of prey sitting on a branch or soaring on the wind, it may not look like it but it is probably hunting.

What do they look like?  They are big grey birds with a red spot on their heads, long necks and legs, and small heads with a bill that’s straight and longer than the head.

Where can we find them?  They can be found in wetlands and on open grasslands.  They migrate in really large flocks.

What is a baby Sandhill crane called?  The baby is called a colt, and just like a baby horse, the baby crane has very long legs and likes to run!

Check out these links to learn more about them.