“A long time ago – no one knows just when – people paused beside the running water of the desert river. Their pause became a short stay. A short stay became a home. A home became many homes and these became a village. Watercourses were their highways. Permanent water is the magnet that draws life. Animals to hunt and plants to gather were plentiful. Farming and crops of corn, teparies, squashes, and other native foods were a good possibility. And thus it was that life evolved along the river.” By Bernard L. Fontana writing of the Rio de la Santa Cruz at Bac [sic].

The headwaters are in the San Rafael Valley, south of the town of Patagonia, east of the Harshaw Mtns. The San Rafael Valley is an important wintering area for grassland birds and overwintering raptors such as Ferruginous and Red-tailed Hawk, Merlin, Golden Eagle, the occasional Bald Eagle from Parker Canyon Lake, and Northern Harriers. Its pristine native grasslands support pronghorn year-round. The length of the Santa Cruz is an important bird flyway and staging rest stop for migration. 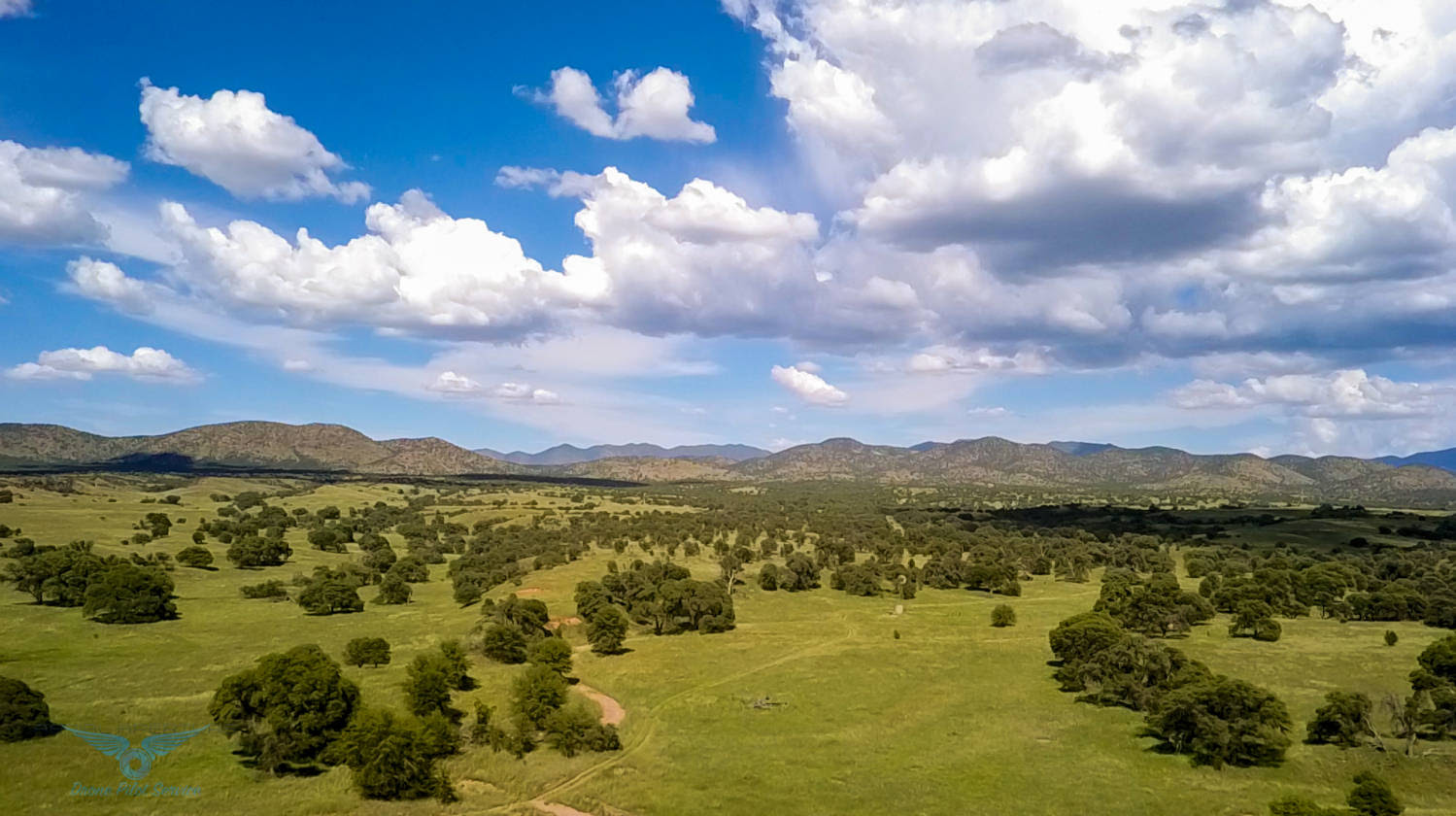 For roughly 32 miles, it flows south into Mexico to San Lazaro and then turns back north re-entering the US, 5 miles east of Nogales. It will continue north/northwest passing Tubac, Tucson, and Casa Grande, finally joining the Gila River southwest of Phoenix.

The major tributaries begin in the SR Valley at Bog Hole cienega, seeping springs above Vaca Ranch, Canelo Hills, the Huachuca and Patagonia Mountains. As it continues north it receives drainage from the various mountain ranges from the Santa Ritas north to the Catalinas. Except in flood, it has historically been a dry river bed, with occasional cienegas and marshes from seeps. However, its subterranean reservoir has been used faster than replenished.  The river is now mainly underground except along those areas supplied by treated effluent near Nogales and Tucson or during storm flooding.

Current threats are overuse of groundwater for urban areas, agriculture, overgrazing, ongoing drought, and severe erosion. The dry river bed is used as a dumping ground for trash. How sad to see stretches of my favorite river littered with tires, refrigerators, bottles, plastic, and the debris of our material world.

The drop in water tables has led to the loss of native cottonwood, alders, and willows along its banks. Early explorers described the river as crystal clear and full of fish, turtles, beaver, and muskrat. Early settlers also encountered black and grizzly bears, wolves, mountain lions and bobcats. In the 1930s, there was still a bosque of large cottonwoods, mesquite, and riparian areas near San Xavier Mission.

The cities and towns along the course of the Santa Cruz River continue their efforts at preservation and restoration of this unique and valuable resource. The ranchers in the San Rafael Valley practice conservative grazing management which has resulted in a healthy grassland system.

I encourage you to become informed and actively involved in nurturing and maintaining the health of our Arizona rivers.

Interesting fact: Movies filmed in the San Rafael Valley include “Tom Horn, Monte Walsh, and Oklahoma”. The Cameron Ranch headquarters in San Rafael Valley was used as the ranch house in “Oklahoma”.  ear the old border crossing at the town of Lochiel, SW corner of the Valley, corn was painstakingly grown to simulate Oklahoma landscape. Every morning, residents of Lochiel and film crews tied wax peaches on barren trees for filming lush spring and summer scenes, taking them down again at nightfall. More filming was done in the grasslands near Elgin. The biggest benefit from Hollywood was the underground electricity and phone lines that the locals insisted be done prior to filming, rather than unsightly utility poles. A far-thinking move that has kept the Valley with pristine grassland vistas.

Sources and quotes:  Where Water Flows – The Rivers of Arizona, by Lawrence Clark Powell. and Changing Rivers:  How People Have Affected The Rivers – Water Resources Research Center, College of Agriculture, The University of Arizona, March 1997 plus internet searches including Wikipedia and google books.

Return of the Baby Gray Hawk

On July 8, 2011, I was out with three other biologists from Arizona Game and Fish working in the Atascosa Mountain region, west of Nogales. This is a unique area because of the interface that occurs with Mexico. You can find a lot of diverse mammals, birds, and reptiles in this region, including coatis, elegant trogons, and Mexican vine snakes. In the past few years, the whistling call of the gray hawk has become more common, and on this particular trip, we encountered two nests.  We were down there doing bullfrog surveys at various cattle tanks that surround Pena Blanca Lake. At the end of one of our surveys, we were approached by two off-duty Border Patrol officers who asked us to return to the base station with them to see an injured hawk that was on the ground. When we got to the station we found a baby hawk sitting at the base of a tree. There had been a storm the night before, and it most likely had been blown out of the next. The baby had some brown feathers growing in on its back and wings, but was otherwise still covered in down. After describing some various hawks and their calls to the men, we were able to determine it was a gray hawk. Our first thought was that we needed to get this baby back in the nest, but the nest was inaccessible without climbing gear. So I made a nest out of towels I had and placed it in a 5-gallon bucket (all we had for containment) and brought it into Liberty Wildlife.

Now, we are quite fortunate that Liberty has such a great relationship with Game and Fish. Many of you know Tuk and Kyle, who work with the Eagle Program for Game and Fish. They spend a lot of time climbing trees and cliffs to access Eagle nests, so we asked if they would help us out getting this bird back into its nest and they agreed to help.

On Thursday, July 28, Tuk, Kyle, another biologist named Robert Fink, and I headed back south toward the Atascosa Mountains to hopefully return the baby gray hawk to its home. We arrived back at the Border Patrol Base Station and were a bit discouraged when we found nothing in the nest. It didn’t take long, though, until we noticed a fledgling perched in a tree adjacent to the nest tree. Both adults were found not far from the nest as well.

Kyle put on his climbing gear and got himself up the tree and as close to the nest as possible. Then, with the help of a long, sturdy branch, he coaxed the baby onto the end of the branch and allowed it to perch there. Then he pushed the branch to the edge of the nest, and the baby climbed off the branch and back into its nest. When we last saw the baby hawk, it was happily perched in the nest. A successful return to the nest hopefully means that this bird will eventually contribute to this sensitive species population. 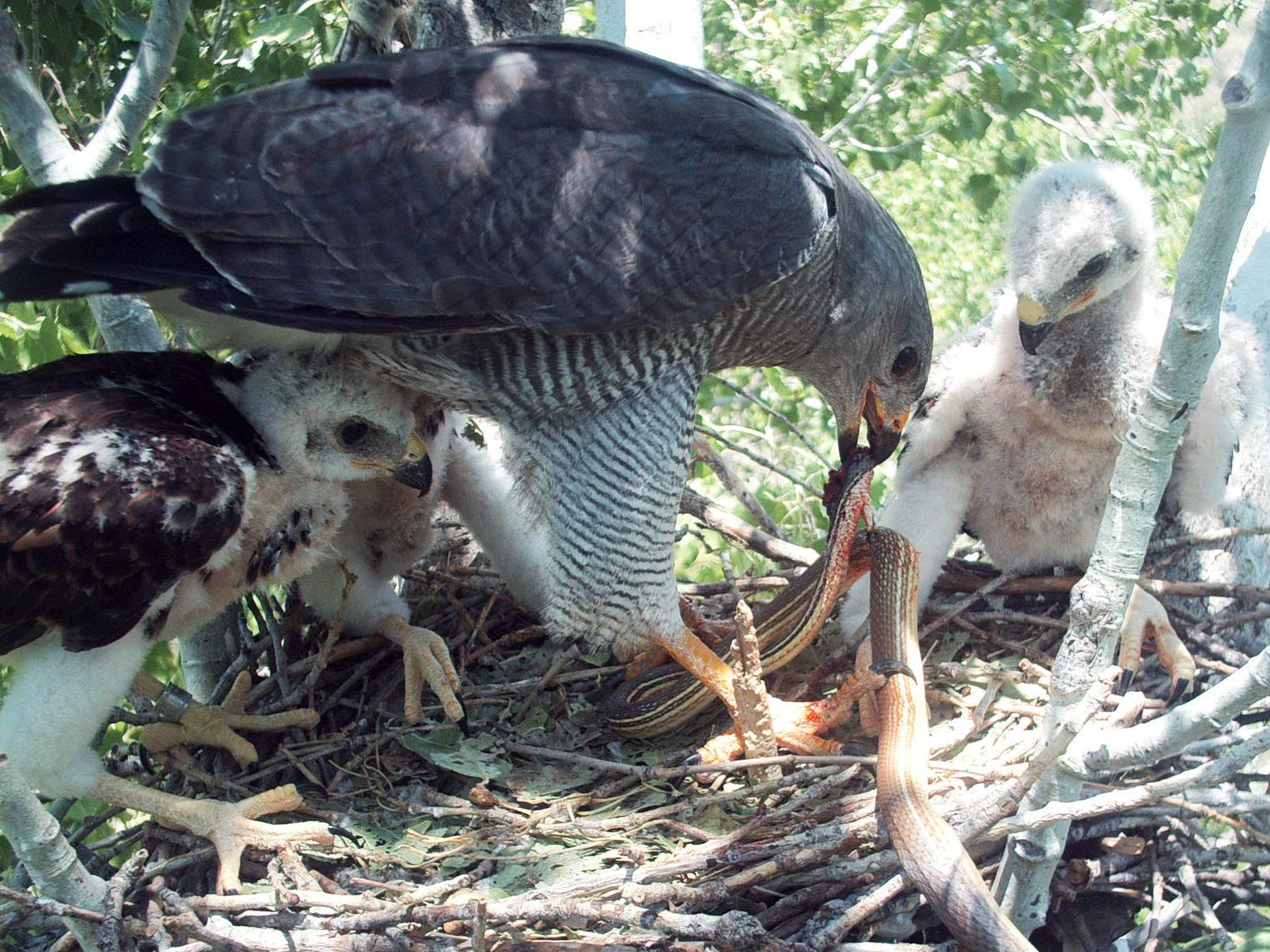 Arizona Night – Where the Wild Things Are

When the hot hand of the sun lies heavy on the desert it pays to be nocturnal. Most all Sonoran Desert mammals become active when the sun goes down. In the skies and underfoot wild animals come into the night with an aura of mystery.

In a nod to nocturnal, Arizona ’s state mammal is the ringtail. This squirrel sized critter is fierce but also cute, with wide black eyes ringed in white, and a fluffy black and white boa of a tail. This considerable tail provides balance as the ringtail climbs and jumps through its rocky habitat searching crevices for prey. Ringtails navigate sheer cliffs with semi-retractable claws and hind feet that handily rotate 180 degrees for head first descents. Acute eyesight and a keen sense of smell help the ringtail locate rodents, birds, lizards, fruits and insects. A quick pounce and a swift bite to the neck, and it’s all over for unlucky prey. In turn, ringtails are hunted by celebrated predators of the night, such as great horned owls, bobcats and coyotes. 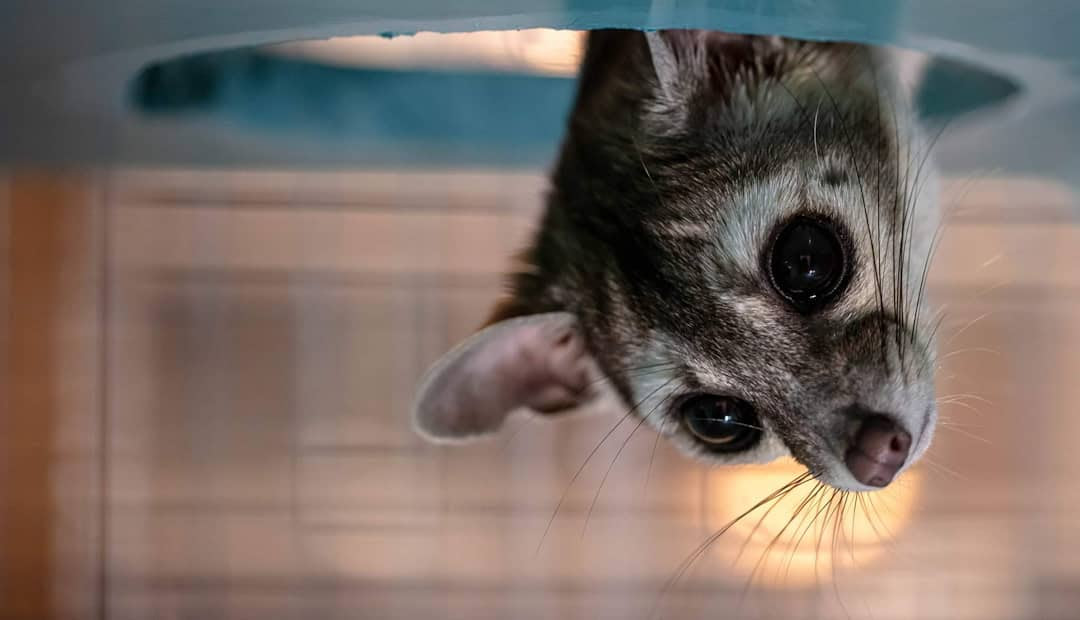 Another nocturnal critter in black and white is the skunk.  Four different skunk species live in a variety of habitats across Arizona. Skunks walk flat-footed on plantigrade hind feet – envision a shuffle with a waddle. Their pungent spray carries 12 feet from the exit end of the animal. A reasonable skunk will warn offenders by stomping before spraying. The spotted skunk is unique for its ability to climb trees, and also because it offers a special pre-spray warning. If you come upon a spotted skunk doing a handstand, don’t stick around for the next act! Skunks prefer thick brushy areas where bugs, lizards and bird’s eggs can be unearthed from beneath rocks and debris. Only great horned owls hunt skunks. Since they don’t have a sense of smell, not a nestling complains about skunk for dinner. Sadly, many skunks end up roadkill on rural roads.

A great diversity of desert rodents scurry forth to gather food under the blanket of darkness. Most eat seeds, mesquite beans and vegetation; but southern grasshopper mice are predators, miniature warriors at the bottom of the food chain. These furry mice prey on insects, lizards and even other mice; stalking and ambushing their victims. In behavior reminiscent of wolves, pairs of grasshopper mice establish territories where they raise and teach their young, ranging far afield each night on hunting expeditions. Grasshopper mice are known for their howling, perhaps striking fear into the hearts of the hunted when they rise up on their hind legs, noses to the sky, and wail their eerie cry.

Surely bats are the most iconic mammals of the night. Although many people find bats creepy, they are an important cog in the wheel of life on earth. With 18 different families, bats make up one fourth of the total population of mammals. At the mildest end of the spectrum are families of bats that eat leaves, fruits and nectar, many are vital pollinators. Bug hunting bats keep some of earth’s most aggressive crop hunters in check, using echolocation to snatch insects from inky skies. Carnivorous bats eat rodents, lizards, birds, frogs, other bats and even fish. And yes, a few species of bats subsist on blood. Often misunderstood, bats have ranged the earth for over 50 million years, and are now the most threatened land mammal in North America.

Trees are awesome! Firefighters and forest rangers work hard to protect them.

Fire can be helpful to nature and the health of forests and grasslands.  When it gets out of control, it is a wildfire and needs to be stopped.  Firefighters and forest rangers work to stop wildfires.

Meet Pando, the largest living organism in the world!  No, it’s not a giant sequoia, a whale, or an elephant!

Here is a chance for you to fill in blanks and create your own silly story about YOU in a forest.