A feather is not an external tool. But nor is it a traditional appendage. Feathers define almost every aspect of a bird’s 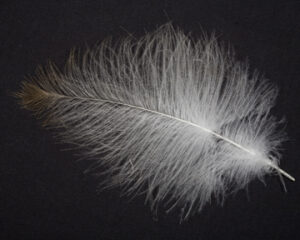 existence: downy feathers protect from the elements, while primary, secondary, and tail feathers provide the miracle of flight that gives them their incomparable edge. Plumage variations can: attract mates, as in the case of the peacock; help birds ward off predators or hide from prey through skillful camouflage, as seen in species big and small; even provide stabilization to younger birds that need the help. Immature Red-tailed Hawks, for instance, possess longer tail feathers than their adult counterparts, giving them added forgiveness while learning to fly, in the same way that training wheels help a human child’s first tentative moments on a bicycle. Feathers come in specialized forms in different species for different circumstances. Waterproofing is far more important to a duck than an owl; indeed, the Great Horned Owl actually sacrifices the ability to waterproof its coat in exchange for special feather characteristics that enable it to glide silently through the air.

Yet for all that, feathers are categorically different from, say, the thin, membrane-like skin of a bat’s wings. They are not a permanent part of avian anatomy. As they age, birds gain and lose countless feathers in a predictable annual cycle called the “molt.” Just as a shark continually replaces its teeth throughout its lifetime, birds 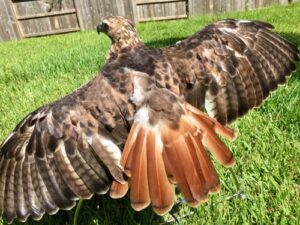 habitually discard old, worn out feathers with new ones that grow in their wake. The molt is incredibly well orchestrated from a biological perspective: since the overwhelming number of avian species rely upon their feathers for flight, losing them all at once would be a death sentence. Instead, feathers shed sequentially and symmetrically, a few at a time, ensuring that their temporary loss is more than compensated for by those that remain. This staggered shedding process also ensures that new growth remains safely buffered by older feathers capable of absorbing the brunt of any unforeseen impacts. Remember that birds of prey routinely collide with their food (and the ground). The better the hunter, the more likely that their plumage takes a thorough beating. The molt is necessary maintenance that allows them to keep going, sometimes for decades on end.

When we think of feathers, we imagine them impossibly light, bound to a firm hollow shaft, that is remarkably strong, given its makeup. During initial growth, that shaft acts as a conduit, carrying blood from the bird’s body to facilitate feather growth. 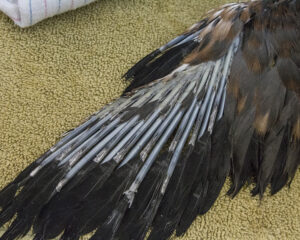 Anyone who has ever worked with birds in any context, or owned them as pets, is familiar with the fragile nature of “blood feathers.” The hardening of the shaft only takes place at the end; until that occurs, growing feathers are delicate things, prone to breaking. Such damage can be potentially hazardous, as ruptured shafts continue to drain blood unless plucked. Once a feather completes its growth, the shaft hardens and the flow of blood ceases. Damage after that point has no directly ill effect upon the owner, beyond the limitations that too many broken feathers might impose on swift flight.

Many birds seem fascinated with their old feathers after the fact. Nest linings often include molted feathers, and raptors have been known to pick up and drop, then pick up again, their discarded feathers, as if delighted by their gentle, spiraling descent to the ground. More than a tool, yet less of a permanent fixture than one might think, feathers are to them what all the accoutrements of human society are to us. For shelter, for food, for transport, for beauty … for life itself, no matter the species, feathers make them what they are.

Birds of the Sonoran Desert commonly known to involve themselves in the sexual lives of plants include hummingbirds and white-winged doves.  Bats are pollinators of the night bloomers. All of these critters rely to some lesser or greater degree on plant nectar while nectar-producing plants must have help with pollination in order to reproduce.

Nectar comes from Greek roots that mean overcoming death.  Without the flowers to provide them with sugars, carbohydrates, amino acids, water, ions and other compounds, pollinating birds such as hummingbirds would not survive.  I was watching a hummingbird feed at chuparosa blossoms and got to wondering about nectar production.  How much nectar is in those flowers and how does it get there?  Does it ever run out?

Plants produce nectar in glands called nectaries.  Moisture is pulled from the plant phloem and sugar and other compounds are

added.  The nectar is secreted from epidural cells through pores such as trichomes or stomata.  Floral nectaries may be on any part of a plant’s budding flower including the petal, stamen, sepal or ovary.  The placement of the nectary as well as the shape of the flower directs the pollinator where it is most likely to brush against reproductive organs of the plant, thus picking up pollen.  The distribution of pollen is the pay-off for the plant. Over time, the various types of nectaries have evolved to suit the pollinators that best serve the plant’s needs.

Extrafloral nectaries may be located on leaves, stems, or petioles.  This nectar is used to attract plant defenders, such as ants or wasps. Extrafloral nectar is only produced when the plant is being threatened by predators such as aphids, or caterpillars. The defenders come to feed on the nectar and while they are there, feed as well on the plant’s attackers.

The chuparosa shrub I was watching is an important food source for desert hummingbirds in the winter. The red tubular flowers hold their nectar in the base of the bloom, accessible to the hummingbird with its long bill and tongue.   Typically, hummingbirds search visually for tubular red or orange flowers.  They need a high volume of flowers as each bloom holds only a tiny drop of nectar.

Migratory species of hummingbirds such as the Rufous and Broad-Billed are especially dependent on flowering sources of nectar along their migratory route.  The high metabolism that allows them to fly long distances in chilly or wet weather also requires regular infusions of nectar sugar. The timing of flower to migration is critical to prevent the birds from having to spend too much time foraging. 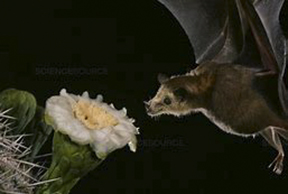 The Sonoran Desert’s iconic saguaro cacti bloom primarily at night, so they are often pollinated by nectar-feeding bats.  Saguaro flowers open between 10 pm and midnight and close around noon the following day.  Nectar production begins after the flower opens and continues for several hours after sunrise.  Each flower produces 2 ml of nectar and .5 grams of sugar.  The flower also produces large amounts of pollen.  In addition to the bats, these flowers are pollinated in the mornings by white-winged doves, Gila woodpeckers and curved-billed thrashers. There is a synchronicity between migration of bats and white-winged doves and the flowering of saguaros.

Next time you see a hummingbird feeding at a blooming plant, or see a white-winged dove perched at a saguaro flower you can be sure that the plant’s nectar factory is in full swing. 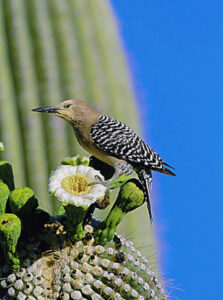 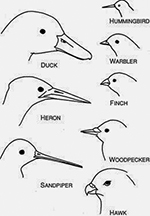 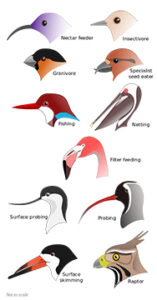 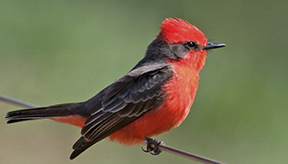 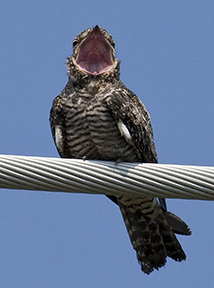 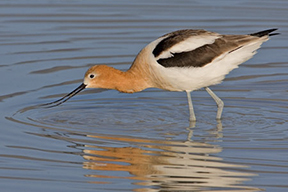 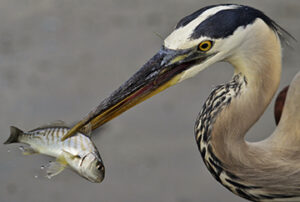 IF IT HAS FEATHERS, IT’S A BIRD! Birds are the only living creatures with feathers. Feathers are made of keratin, the same protein that makes up a bird’s beak, lizard scales, mammal hair, human fingernails, animal hooves, and horns! Feathers help birds fly and keep them warm and dry. The color pattern of feathers, called “plumage,” can help birds stay camouflaged or find mates.

What happens when a bird gets wet? Do feathers help keep it dry and warm? https://www.birdnote.org/show/what-happens-when-birds-get-wet

How do feathers help a bird stay warm on a cold night? https://www.birdnote.org/show/birds-cold-night

Find out about bird beaks and how birds use them. https://www.youtube.com/watch?v=G_SWxGP-1jE

Here are two books for you to read.

Feathers are not Just for Flying

Read about how feathers of all shapes and sizes help birds with warming or cooling, protect them from the sun, help them swim, glide or even dig.  Feathers are not Just for Flying by Melissa Stewart and Sarah Brannon is part science journal, part read-along nonfiction. https://www.goodreads.com/book/show/17870871-feathers Gr 1 – 4

In this book, you will learn about several different birds, their habitats, and how their beaks are styled to help them survive. You will see 3-D cut pictures by Robin Brickman of birds in their natural environments with their beaks in action. There is also a quiz, a bibliography, and a list of web sites to learn more.   https://www.goodreads.com/book/show/1621377.Beaks_?from_search=true Gr. K – 4