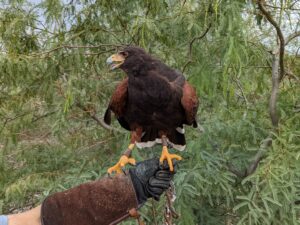 Salsa was a nestling that was near fledging when she was brought to Liberty Wildlife after being found on the ground in Phoenix.  Medical services staff discovered that Salsa had contracted Trichomoniasis or canker that was deeply embedded in the right side of her lower mouth and mandible. As Salsa’s treatment progressed, the tissue on the right side of her mouth sloughed off, leaving considerable scarring. This scarring reduced the size of her mouth opening, consequently limiting the size of food she could swallow and her ability to eat quickly. In the wild, these limitations would result in her starving to death because she could not consume sufficient food fast enough to survive the competition. The disease also caused her beak to be slightly malformed, hindering her ability to eat quickly.