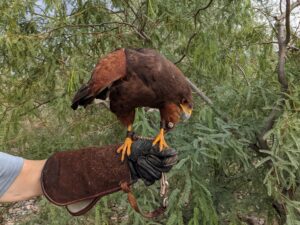 Arriving as a nestling, Lance was found to have both a leg injury and Trichomoniasis, a disease caused by a protozoan that can kill a bird if left untreated. While Lance was being treated for the disease, the tendon in his injured leg slipped from its location, requiring additional surgery. After recovering from both the surgery and the Trichomoniasis, Lance again became sick with that disease requiring further treatment. As a result of his extended stay in the intensive care unit of Liberty’s medical facility, Lance became imprinted.