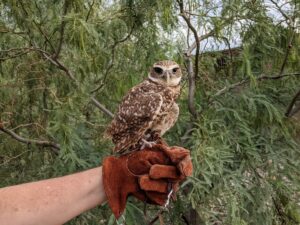 Diego came from a Kingman animal clinic.  Liberty’s medical staff discovered that he had experienced an injury to his head, and he demonstrated that the injury had affected his natural instincts to survive in the wild.  As a non-releasable, he became a welcome member of the education team.

Description: Burrowing owls have long legs and short tails, round heads, and no ear tufts. They have brown, cream, and white plumage.

Habitat: Burrowing owls live in open habitats with sparse vegetation such as prairie, pastures, or desert, and airports. They are closely associated with prairie dogs and ground squirrels, whose burrows they use for nests.

Range: The burrowing owl is found in Western North America, through Mexico, Central and South America.

Life span: Estimates of life span range from 3 to 11 years in the wild.  In captivity, they have lived for over 10 years.

Prey: Burrowing owls hunt mostly at dawn and dusk.  They tend to hunt insects during the day and small mammals at night.