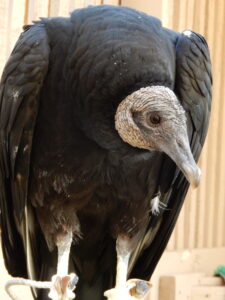 Gaucho had been hanging out for over a month in his rescuer’s backyard. He would not leave their yard and had no fear of the people. During his medical intake, he was determined to have no injuries to preclude his release. However, his obvious lack of fear of people indicated that he was habituated and non-releasable.

Black Vultures are found in the southern and eastern United States as well as Central and South America.

Life span: Black Vulture’s average life span is 10 years in the wild and up to 30 years in captivity.  A banded Black Vulture was known to live to 25 years.

Prey: An aerial scavenger, the Black Vulture feeds on dead mammals ranging from mice to cattle.

Babies/Nests: Black vultures do not build nests. Nesting sites include rock outcrops, fallen trees, cliffs, and hollow logs. Usually, two eggs are laid which hatch in 38 to 45 days.  The young fledge in about 90 days.