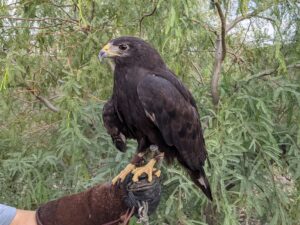 Willow was found on the ground by a rescuer and brought to Liberty Wildlife. During her examination, she was found to have fractures to her right wing so near the joint that surgery was precluded. Once her wing was completely healed, she was unable to extend it sufficiently to gain full flight. Consequently, she could not be released and became an exciting addition to the education team.

The zone-tailed hawk is a dark tropical hawk that ranges from the southwestern United States (Arizona, New Mexico, and Texas) through Mexico, Central America to central South America.

Life span: Because the zone-tailed Hawk is so uncommon in the U.S., little research is available in general. No information is available on the lifespan.

Prey: Its most common prey consists of birds up to the size of quail (47%), large lizards and other lower vertebrates (33%), and small rodents such as ground squirrels and chipmunks.

Babies/Nests: Stick nests are usually built in tall trees along main rivers and canyons. The female will lay 1 to 3 eggs with the typical clutch consisting of 2 eggs.  Incubation is usually for 35 days, and the young fledge in 42-49 days.