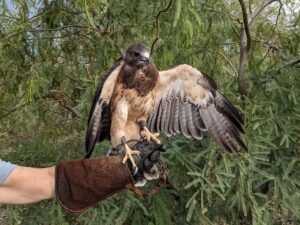 Etta was transferred to Liberty Wildlife from a private rehabber. Arriving as a three-year-old, Etta had no flight ability because of an injury to her right-wing, which probably occurred when she was a juvenile. Although trained as an education ambassador, her original handler had reduced education opportunities over the years and elected to place her with Liberty for Etta’s benefit.

Prey: The Swainson’s hawk is somewhat of a generalist and eats whatever it can find. During the breeding season, as much as 90% of Swainson’s hawk’s diet will consist of small mammals. It will also hunt insects especially grasshoppers, crickets and locusts and birds, and occasionally reptiles and amphibians.