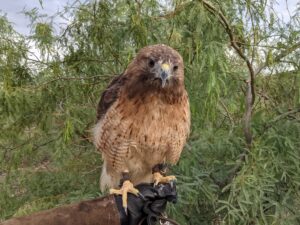 Skye was transferred from a Washington state facility to Liberty Wildlife in 2011.  According to the transfer documents, Skye was taken from the wild as a chick in 2004 and imprinted. She was illegally kept by a man in southern California who gave her to a California center when he no longer wanted her. There she was determined to be non-releasable due to her imprinting. She was given to a falconer to determine if she could be used for hunting and eventually returned to nature. The falconer returned her after a week reporting she did not have the aggression necessary to hunt. She was then transferred to a Washington facility and then to Liberty.