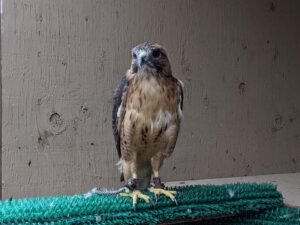 Scout came in as a juvenile. He had an impact injury to the head from a stray golf ball on a golf course. He was treated for head trauma, but it was obvious the trauma had a lasting impact on his behavior. He seemed to not be afraid of humans and did not know when it was a good time to flee. Often with head trauma, there are some lingering effects from the damage and for this reason Scout was not able to be released.