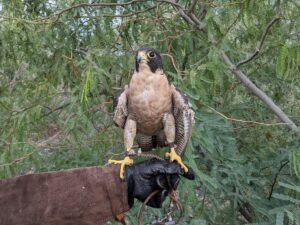 Zephyr was transferred to Liberty Wildlife from another rehabilitator as a 2-year adult. A veterinary examination revealed that he had a healed fracture to his left metacarpus, the bone at the tip of the wing. Although Zephyr had some flying ability, he had trouble maintaining elevation. After observations of Zephyr’s difficulties in the flight cage, he was judged to be non-releasable. Liberty is fortunate to have another handsome male peregrine as part of our education group.

The peregrine falcon has one of the most global distributions of any bird of prey. This falcon is found on every continent except Antarctica.

Life span: Though most peregrine falcons do not live to be 1 year old (survival rate for the first year is 40%), the average age of those that live beyond the first year is 13. In the wild, the Peregrine Falcon lives from 7 to 15 years.  Maximum longevity records for banded birds range from 16 to 20 years.

Prey: The peregrine falcon captures its prey in the air since its primary food consists of birds such as starlings, mourning doves, pigeons, pheasants, and waterfowl.

Babies/Nests: Falcons do not build nests, but rather dig small depressions called “scrapes” in sand, dirt, or debris or in high cliffs, trees, or tall buildings. Sometimes they will use an abandoned hawk’s or raven’s nest.  The female will lay between 2 and 6 eggs and the eggs will hatch in 33 to 35 days. The young fledge in 35 to 42 days.