Birds can sleep with one eye open and half of their brain awake, enabling the bird to detect predators while catching a bit of rest. Unihemispheric slow-wave sleep (USWS) is the ability to sleep with one half of the brain while the other half remains alert. Birds and many marine animals share this amazing adaptation.

Birds can sleep more efficiently by sleeping with both hemispheres simultaneously (bihemispheric slow wave sleep) when in safe conditions, but will increase the use of USWS if they are in a potentially dangerous environment. 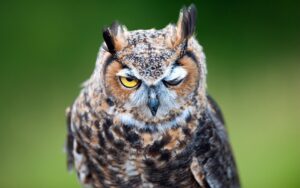 When migrating, birds may undergo USWS in order to simultaneously sleep while visually navigating flight. This can allow certain species of birds to sleep without hindering migration and to prevent making frequent stops along the way. Certain bird species are more likely to utilize USWS during soaring flight, such as the Albatross, but it is also possible for birds to undergo USWS in flapping flight as well.

Swainson’s thrushes travel up to 3,000 miles every autumn from northern Canada and Alaska to winter in South America, and in spring make the long trip back. The birds fly at night for hours at a time without sleep, and utilize USWS while they continue to fly. To help make up for sleep lost during long night flights, studies suggest these migratory birds take hundreds of power naps during the day, while at roost, each lasting an average of 9 seconds.

Studies have shown that ducks tend to take short naps while they fly by shutting off half their brains. The flock rotates the birds that are on the outside (fully awake) and those that are on the inside (‘sleeping’). This keeps everyone fresh and rested, and it also helps protect the flock by putting the most alert birds on the outside.

On land, this half-asleep adaptation is important to birds whether they are solitary or in a group. In flocks of birds at roost, those at the outer edge of the flock often have one eye open. The eye connected to the sleeping half of the brain closes; the eye of the wakeful hemisphere remains open and vigilant. Birds in the middle of the flock are resting their entire brain, with both eyes closed.

In parts of the country that get real winters, folks who maintain seed and suet feeders are rewarded with hours of bird watching joy. Here in the Sonoran Desert we can attract birds to our winter gardens by planting winter bloomers. A number of terrific landscape plants flower in the fall or winter, and because they are native to the area, their life-cycles are intertwined with local birds and insects.

If you are looking for a sunny place to add a native plant or two, consider this. Native plants have lovely natural forms that are far superior to the boxes and bowls that landscapers might prune them into. Formal gardens belong to times past. In natural landscapes plants grow freely, flower vigorously, and set ample seeds.  All of these functions are essential to wildlife. Learn about the ultimate size of the plants you are considering, then place them where they can grow naturally without taking over.
Beyond location, nothing influences the success of a new plant more than the humble planting hole.  Although invisible, the root system is the beating heart of the plant, accessing vital nutrients and water, and forming relationships with micro-organisms in the soil, as well as with other nearby plants. By digging the planting hole 3 to 4 times wider than the pot the plant is in, you loosen the soil, providing for an expanding root system. Don’t dig deeper than the plant sits in the pot though, or the plant will sink over time.

Movement of irrigation through the soil is the other invisible issue to consider.  Water should be provided deep in the soil and around the drip line of the outer branches.  Deep watering with time in between for the soil to dry out is optimal.  A simple soil probe allows you to measure how deep your irrigation is absorbing.  Push the probe down until it encounters resistance.  That is your irrigated level.  Water shrubs to one foot deep, trees to three feet, with the frequency depending on time of year. This time of year water new plants every 3-4 days for the first couple of weeks and then extend the time gradually to once every week and then once every two weeks.  When the plant is one year old you may only water once a month or bimonthly.  Established native plants need very little supplemental water in the winter.

Below are a few easy to grow shrubs that make wonderful cover for wildlife and set nectar laden blooms. Seeds that follow the flowers provide vital protein as breeding season nears. 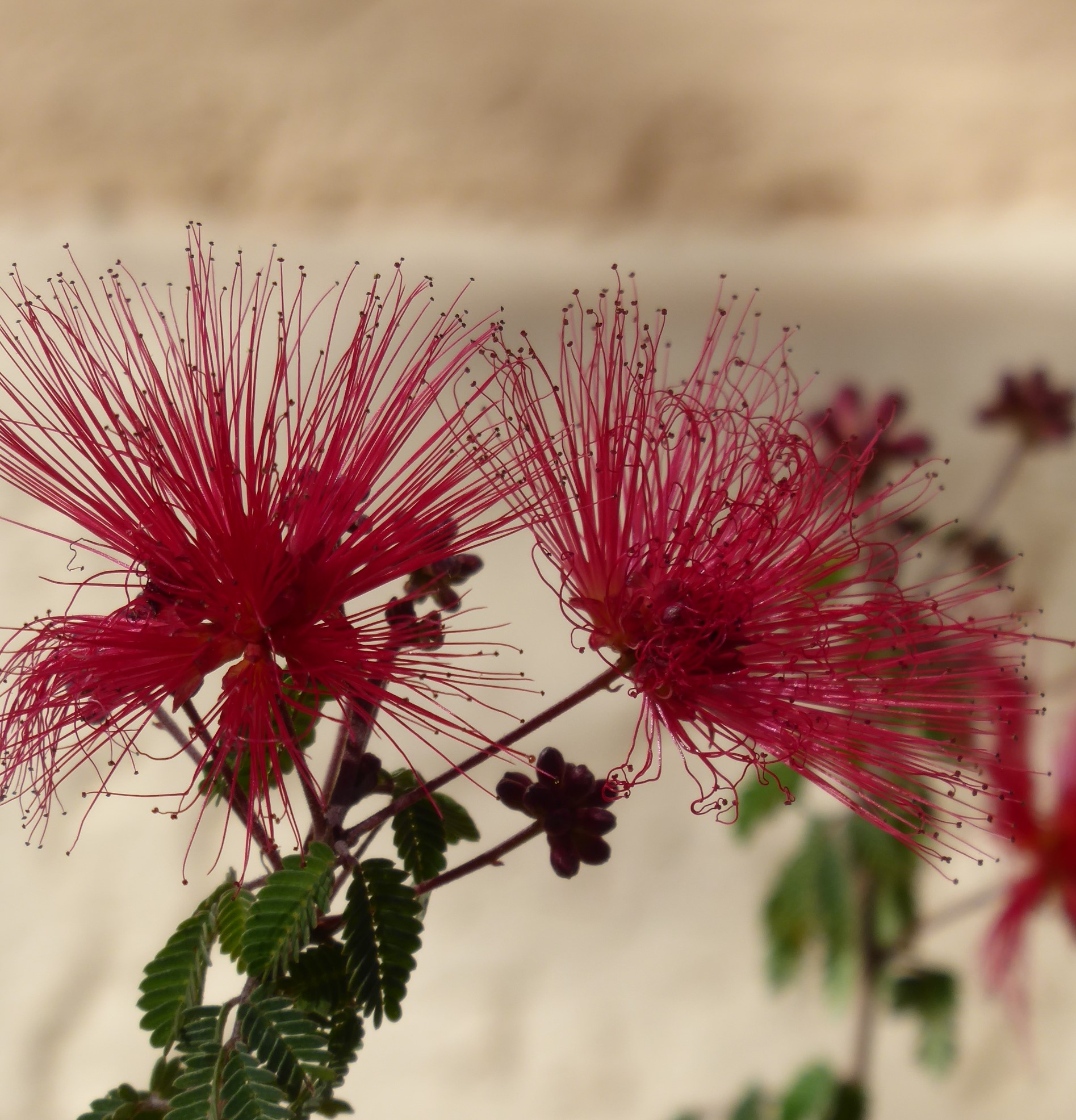 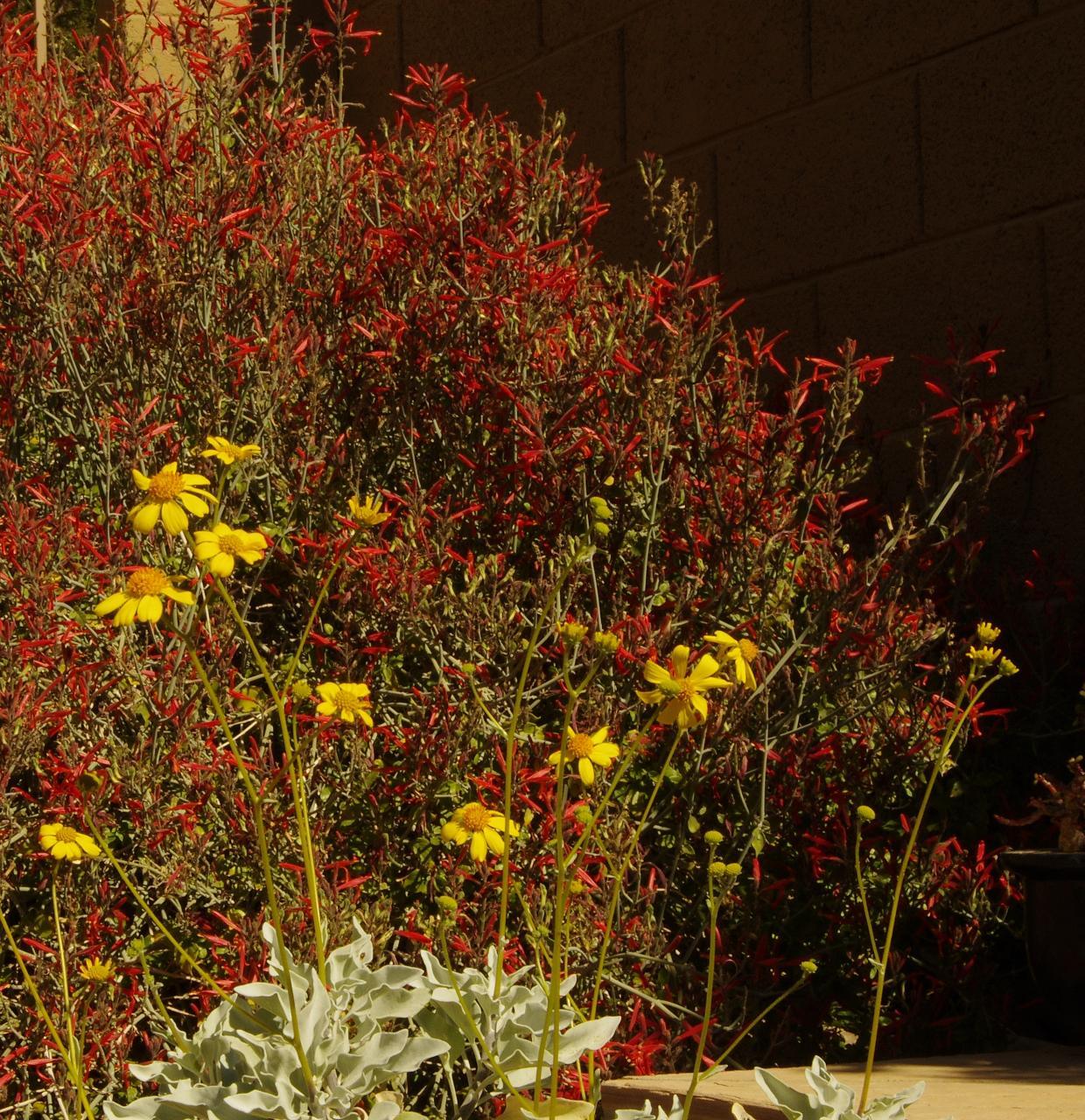 Chuparosa, Justicia californica is a favorite of Costa’s Hummingbirds and verdins. It sprawls to fill in areas 4 x 4 feet.  Tubular scarlet flowers bloom fall to late spring.
Wolfberry, Lycium fremontii is an excellent wildlife plant, providing cover and berries. Blooms late winter to spring and fall.  Grows in a large mounding shape 8 x 8 feet. Thorn alert on this one! Plant in an exterior corner where you don’t need to bother with it much.

As Phoenix starts to cool down, residents will be spending a lot more time outdoors. We may be taking walks through our neighborhoods or hikes through parks like Papago, South Mountain, or the White Tanks. Something special that I often look forward to when spending time outside is the ability to observe wildlife. Quails, chuckwallas, snakes, hawks, finches, coyotes, and countless other native Arizona species are out there and waiting to be seen!

It is important to avoid interacting with wildlife beyond observing them to avoid harming the animal. The general rules are to maintain a respectful distance, never to feed any wildlife, and to leave no trace. It is important to avoid touching or interfering with wildlife, and there are only a few scenarios when it is appropriate to pickup or take an animal away from where it is found.

Two years ago, I was hiking at South Mountain park and came across a clearly injured ground squirrel. It seemed to be trying to stand but unable to, it also had some blood dripping down its side. I was not sure what happened to the squirrel but assumed that it had been hit by a car (we were at a point in the trail that crossed over one of the roads going through the park) or injured in a squirrel sword fight. I wrapped him up in an extra t-shirt, placed him in a box that I luckily had in my car, and brought him to the Liberty Wildlife facility after calling. This was my first experience with Liberty!

Some signs that an animal might need human help include being brought to you by a cat or dog, a dead parent found nearby, a bird is featherless, clear evidence of bleeding, broken bones, or severe injury. Some animals like deer and certain species of bird leave their babies alone all day while they gather food. Other species of birds let their young spend days on the ground as they are learning to fly, with watchful parents hidden nearby. It is crucial to be sure that an animal is truly in need of help before taking action. Animals are smart and well adept at caring for themselves and their families. 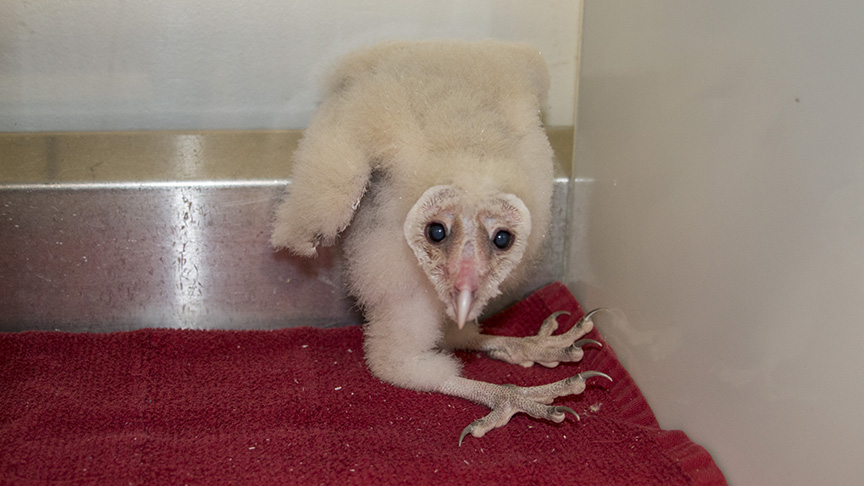 Even when baby animals are found, it is best to leave them alone unless you are certain of their inability to survive without intervention. Baby birds often fall out of their nests and it is not our job to do anything other than place them back in it. Contrary to some popular beliefs, mother birds will not be put off by human scent on their babies and will always accept them back into the nest. If we are out in nature and come across an animal that we can tell needs our help, then there are important steps to follow to ensure the best possible chance of survival and re-release for the animal.

Agencies such as Liberty Wildlife or Arizona Game and Fish should be called immediately if an animal is being taken from its environment. If you must transport an animal yourself then always place them in a safe container such as a cardboard or plastic box with air holes already punched in it. Transport the animal as soon as possible, try to avoid bringing it around loud noises, children, or pets which could disturb or scare them. If an animal cannot be transported to a rehabber immediately, keep it in the box in a warm, dark area. There are some cases where we can tell that an animal is in need of our intervention, like the ground squirrel that found me at South Mountain. In general, it is safe to avoid ever touching or moving wildlife.

Late fall and winter is a good time to think about helping wildlife. During this time of year, finding food and especially water, can be difficult. You can help!
Feed the birds near you!
Make your own bird feeder. Here are some ideas of how to use plastic bottles, bowls, boxes, milk cartons, tin cans and coffee cups to hold bird seed. There’s also an idea using peanut butter on cardboard cutouts or rolls so bird seed will stick to them. Be sure your bird feeder has a place for birds to sit. Also, if you need to put a feeder near a window, be sure it’s within 3 feet of the window or further away than 10 feet because if you place your bird feeder any distance in between those two points it gives birds room enough to fly into the window by mistake and get hurt.

Bird feeders are best put where birds feel safe from predators. Very important: Stay away from open and noisy areas and place your bird feeders at adult eye level or a little above. Have fun making your own bird feeder!

Time to get outside and discover nature by having a scavenger hunt!

Check these things off the list as you find them.

Who can find them all?

Science Fun, www.sciencefun.org, has experiments and projects you will like. Here are two examples.

Marbled Gift Wrap – Science Fun Make your own gift wrap you can use for holidays, birthdays and other special days.

Make it Rain – Science Fun If you live in the desert, you know it doesn’t rain very much! Make some rain!

“If a child is to keep alive his inborn sense of wonder, he needs the companionship of at least one adult who can share it, rediscovering with him the joy, excitement and mystery of the world we live in.” -Rachel Carson