Doves of the Desert 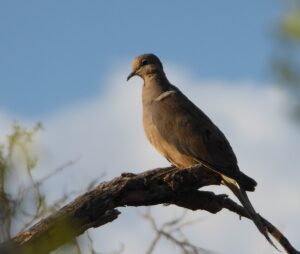 Yet when other birds are hiding from midday heat, doves wing arrow-straight routes over my neighborhood headed for water at the nearby golf course. Surprisingly agile in flight, doves often elude predatory Cooper’s and Red-tailed hawks. Breeding and nesting straight through the searing days of summer, doves are able to raise multiple broods of babies.

Where do they find the gumption? Understanding more about these birds sheds light on their success. Summer is breeding season for doves, so they have important reproductive work to do despite the heat. The desert provides an abundance of nutrition in the way of seeds, legume pods and cactus fruits during the hottest months, so doves are well equipped to produce crop milk for their young.

Doves’ relatively large body mass offers some protection from heat, and their feathers provide excellent insulation. Pinau Merlin in her book Bird Nests and Eggs, shares the story of ornithologist Steve Russell who measured the surface temperature on the back of a Mourning Dove sitting on a nest in midday in June. The thermometer read 160 degrees Fahrenheit. Yet, the bird’s internal temperature was just 104. 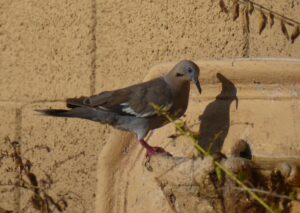 Doves sitting on babies or eggs in a summertime nest absorb heat from their unfeathered young and dissipate that heat by panting. They seek shade when possible, as even a thin covering of shade can lower ambient temperatures 15 degrees. I’ve seen doves on the ground with one wing raised like a sail against the sun.

Those laughably flimsy nests also protect eggs and young from the dangerous heat. The slightest movement of air passes easily through the loosely woven twigs, cooling the eggs and hatchings. Doves turn their eggs throughout the hottest days to keep them from cooking.

Unlike some native birds that obtain moisture from their food, seed-eating doves must drink water. They easily fly ten miles to reach water and rehydrate quickly by sucking the water directly into their mouths. (Many birds must raise their heads to let the water trickle down their throats.) Doves are also tolerant of brackish, salty water.

Because doves cluster at water sources, a water borne disease called trichomoniasis or canker is a scourge to them. Once the disease takes hold it spreads through the bird community as mothers feed their young and as raptors prey on the doves. If you offer water for birds, make sure to change it frequently, as this disease is very contagious and causes a slow death.
The last cool fact about doves that I’ll share with you? According to the Cornell Lab of Ornithology, the oldest known Mourning Dove was 31 years and 4 months old.

There are many threats to the urban birds that share our communities. In Part 1 we discussed the reasons for not feeding bread to ducks and geese. Here are more actions you can take to lessen man-caused threats:

MAKE IT PERSONAL AND BE PART OF THE SOLUTION !! 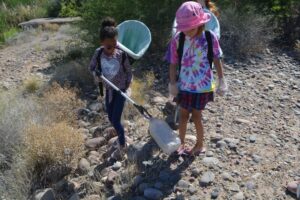 Kid Stuff has an exciting update to share with you. The Superhero Club members have been very busy this Spring helping nature. They’ve participated in “Vulture Culture” activities to reduce, reuse, and recycle materials and they picked up litter along the Rio Salado and made basket nests for baby birds. 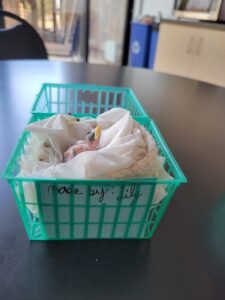 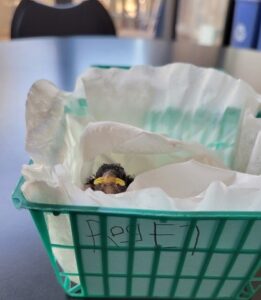 One of the baby bird baskets! 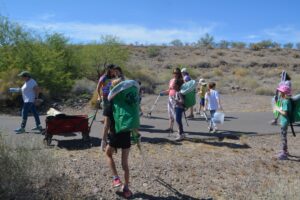 Picking up trash along the river.

Check out last month’s Kid Stuff/Nature News on our website for a list of ideas on how you, too, can help.

Our next adventure starts with this edition of Kid Stuff by introducing Inspector Liberty who will help superheroes hunt for wasted water everywhere. They will look at home, in the yard, in the park, at school, at camp, on vacation and EVERYWHERE they may go because they know that water is important for every living thing! *

This link will show you a fun water detective activity, a video showing a class experimenting with saving or wasting water, a way for you to do your part to save water, and a science notebook to print.
https://www.discoverwater.org/use-water-wisely/

It’s your turn to be a detective and find ways to save water!

Water Detector Activity
Ask an adult to help you to find out and write down how much water your house uses each month. You may have to record several months to find an average usage per month.

Next, what steps can you and your family take to save some water?

This link is especially for the Superhero club adults. It’s a valuable tool to guide kids to an understanding of the value of water. So very well done!