Pretend that you are one of the trout regularly stocked in Tempe Town Lake. Plenty of water, ample companionship: avoid the occasional baited hook, and it’s a pretty good life.

One morning, a shadow falls over your idyllic paradise. You’re not that familiar with the sky, being a fish and all, but you do recognize light from dark. And you instinctively know that activity on the other side of the water’s surface is a harbinger of bad things to come. Your fellows scatter to the deep. You move to follow, but before you can make it down to safety, that shadow is upon you.

Now switch roles, putting yourself in the place of that shadow. You, an osprey, have perched on a nearby freeway light since dawn, waiting for some flicker of disturbance in the lake below to betray your breakfast. Predator or prey, both know to watch for shadows: the merest hint of movement is often the only warning there is. In today’s battle, you were quicker to spot the opportunity, and now you’re airborne again, sopping wet, but otherwise victorious. You’re made for this lifestyle: the pads of your feet bristle with barbs, giving you the perfect tools for wrestling down a slimy, writhing snack. You’re a corsair of the waterways, one of the most specialized predators in the raptor world.

You fish. And you’re good at it. 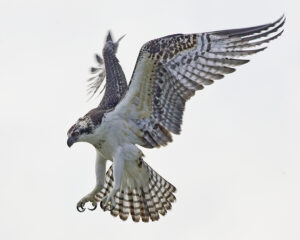 You’re on your way back to your perch, not a care in the world, when suddenly, a shadow descends upon you. It grows steadily bigger; you dodge and weave, but it stays right on your tail. You don’t have time to turn and look, but you know what it is. The undignified cackle of your tormentor belies one of the great predators of North America. Aggravated and afraid, you let go of your fish; you plundered it from the waves, but there’s no honor among thieves.

Now switch your perspective to that of the final victor. You terrified the fisherman into letting go, and before that easy meal hits the surface, you snatch it up. You’re a Bald Eagle, and you let that osprey do the hard work for you. It’s not honorable, but then survival isn’t a gentlemen’s duel. 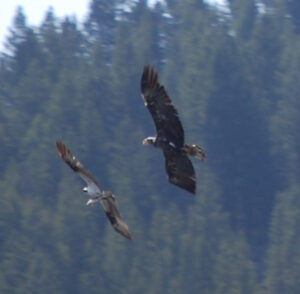 Piracy is a fact of life in the animal kingdom. Every single action a predator undertakes expends energy; the more wasteful one is, the more likely it won’t have the reserves needed to score that next meal. And since those meals are the only way to sustain the perfect engine that is a hunter, it’s easy to fall into a lethal spiral of growing lethargy and looming starvation. Thus, they take what they can get, even if it means stealing it from others. Bald Eagles are no more nefarious than any other raptor. They certainly can, and do, fish for themselves; they simply have the benefit of being apex predators. If an osprey had the tools to bully its way to the counter, it would; but it doesn’t, and so it’s back to the lake for another go at it.

Raptors steal from one another the same way that lions and hyenas do. It’s a common theme for all predators, really. Practically every carnivorous animal flies the Jolly Roger, because the alternative is certain death. The only thing more energy efficient than stealing someone else’s kill is eating something that died of its own accord. Vultures aren’t the only ones with a taste for carrion; even the most regal eagle will gladly dive in. Mighty Red-tailed Hawks, among the biggest and most common hawks in North America, stop to eat grasshoppers as readily as they’ll chase down jackrabbits. They’ll also kill owls, and vice versa, in order to eliminate potential competition. No step can be spared in the quest to live. 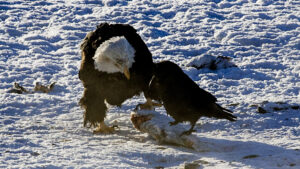 Bald eagle bullies a raven off of his salmon.

For a bird of prey, protecting a meal is as much an imperative as securing it. Raptors aggressively shield their captured prey in a display known as “mantling,” extending their wings around the carcass like a protective dome. They simultaneously puff themselves up to look as dangerous as possible. Depending upon the bird and upon the meal, they’ll often carry their food to a secluded spot, whether up in a tree or down below a bush. The best case scenario is to avoid being seen in the first place. But if a rival does happen upon them, mantling makes it clear that they won’t give up without a fight.

Whether it’s truly worth battling over depends upon the circumstance. An osprey can more easily grab another fish than tangle with an eagle. But a raptor that’s hungry enough – or desperate enough – might have no choice. In that case, mantling isn’t camouflage, and it’s no mere bluff. It’s a threat:

Red rock scenery beckons from Sedona just a couple of hours up the I-17.  Additional enticements for bird watchers are exotic birds inhabiting a unique environment and cooler weather more conducive to outdoor pursuits.

Two biological habitats overlap in the Sedona area: Interior Chaparral and Juniper Pinyon.  The dense, shrubby plant community features shrub live oak, manzanita, pinyon trees, and alligator and Little Utah junipers.   The plants and animals that thrive here appreciate a higher elevation (around 4000 ft), and a different climate. Sedona gets 17 inches of rain, more than double what we get in Phoenix, and cool temperatures in the winter that bring an average annual snowfall of 9 inches.

Some familiar desert friends are able to tolerate the cold.  Century plants from the agave family thrive in the Sedona area, as does yucca, Mormon tea, creosote and a couple of varieties of prickly pear cactus.  But a unique palette of other arid-adapted plants thrives here in the cooler temperatures and higher levels of moisture.  Junipers and cypress trees drop pine cones laden with seeds that are important fodder for seed-eating birds.  Shrub live oak, point leaf manzanita and holly leaf redberry shrubs harbor insects and provide berries and fruits.

The birds pictured below were spring visitors to a residential backyard deck well-equipped with sunflower and rapeseed feeders as well as trays of freshwater.  Note that all of these colorful birds are well equipped for seed-eating with thick strong beaks. 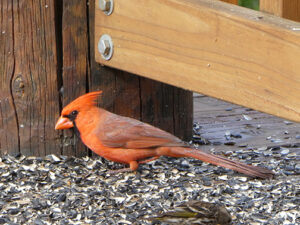 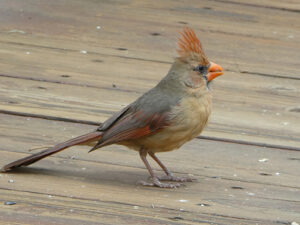 Northern cardinals are attracted by sunflower feeders.  Their diet is predominantly seeds, leaf buds, berries and fruits.  They also glean insects from the ground or low growing shrubs. An aggressive defender of its territory, the cardinal has been known to attack its own image in rear view mirrors, even hubcaps. 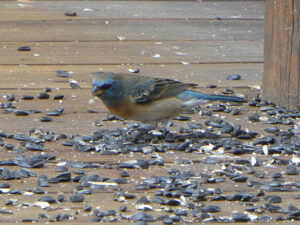 Stunning Lazuli buntings eat insects and seeds from their chaparral habitat and build nests of coarsely woven grasses.  The bunting song is a jumble of lively notes. These blue beauties are usually found near water. 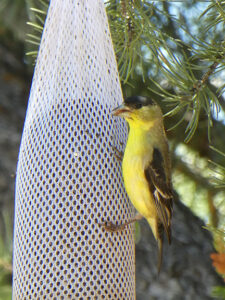 Lesser goldfinches are brilliantlycolored birds that feed on seeds and insects picked from bushes and weedy fields.  These birds require plenty of water so frequent a backyard bird bath.  Pairs may stay mated for life. 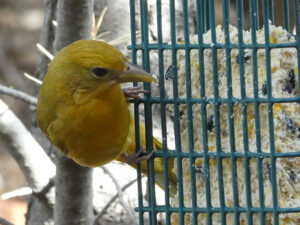 Vividly colored Summer Tanagers catch bees and wasps midflight, then bring their prey to their perch where they rub the stingers out on branches.  Tanagers also eat insects, caterpillars and fruits.  They are found in riparian areas, particularly with cottonwood trees. 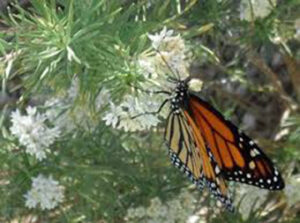 There has been a well-documented decline in the monarch butterfly population over recent decades. Crucial to the survival and life cycle of the monarch is the often-overlooked milkweed plant.  Female monarchs lay their eggs only on milkweed.  Their larvae only feed on milkweeds. The plant contains cardiac glycosides. When the larvae eat the leaves they become toxic to many predators as well as when they are butterflies.  Predators learn to avoid monarch in either form because of bad taste or it makes them vomit. 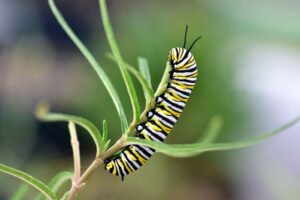 Of the 108 species of milkweed in North America monarchs are only known to use 30 of them.  29 of these are found in Arizona and the southwest.  A few showy milkweeds are: 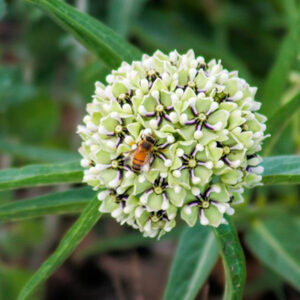 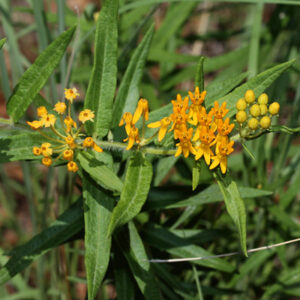 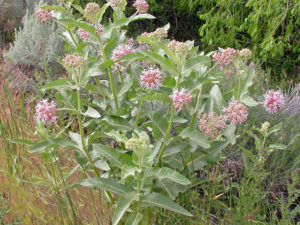 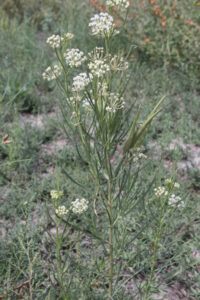 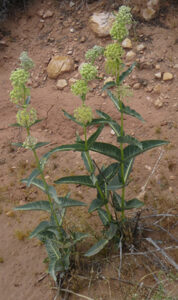 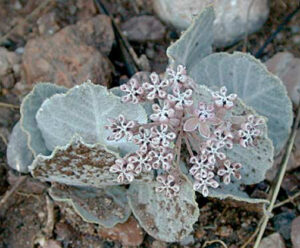 Milkweed plant flowers attract many pollinators other than butterflies.  There are over 400 species of inserts attracted to milkweed.  Only a few are tolerant of the toxin glycoside in the plant’s leaf and stem juices which then make them poisonous to predators. 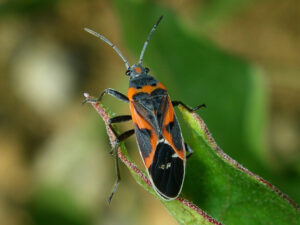 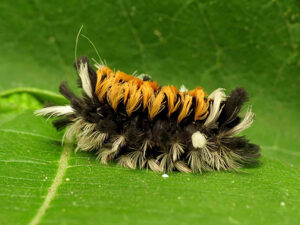 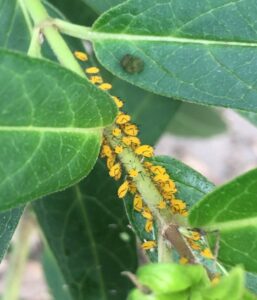 Monarchs cannot survive without milkweeds. We urge you to plant and protect milkweed stands.  Limit or stop the use of insecticides and plant poisons in milkweed areas.

For more information on monarch butterflies as well as how to grow milkweed, go to www.swmonarchs.org

MAKE IT PERSONAL AND BE PART OF THE SOLUTION!

Osprey are unusual hawks.  Find out how they are different, listen to their calls, and check out the fish at a baseball game!

Summer is a great time to enjoy family activities.  Try planting seeds and decorating garden markers or making a “solar still’.  Then create some nachos to celebrate the 4thof July.

Plant your name with seeds K+

How can you clean dirty water using the sun?  In this experiment you will be making a “solar still” that is able to clean water and get the salt out as well.  Gr. 4+

http://www.education.com/pdf/Cleaning_Water_middle/
Celebrate the 4th by making some 4th of July Nachos!  K+