What’s the most common type of nest you see around your house? The most common type of nest found in cities and suburbs would be cup nests. Most songbirds utilize cup nests, which are essentially any nest that is cup shaped and suspended off the ground (this doesn’t include ground nests, which can be cup shaped nests found on the ground). To me, one of the most interesting examples of cup nests are those made by hummingbirds. Hummingbirds usually build their nests in trees or shrubs, generally in a fork of branches. They’re often difficult to spot because they look like just another knot on the tree branch. Hummingbirds weave together twigs, lichen, and leaves to create their nests and utilize spider silk to strengthen the nest and anchor it to the branches. The resourcefulness of these hummingbirds is truly amazing, that they know to use spider silk as an adhesive. Additionally, their nests are lined with soft fibers collected from nearby plants, and are constructed so that the nests stretch outward as the young grow. 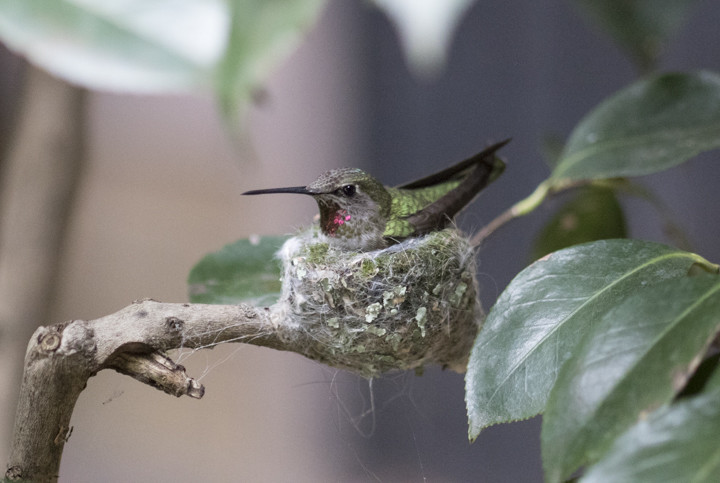 I built a bird box for a kestrel, what kind of nest is that? Most bird boxes are made for cavity nest builders. Cavity nests are essentially a cavity in a tree, cactus, or rocky outcropping that can provide protection for the bird’s young. Owls, kestrels and woodpeckers all utilize cavity nests. Woodpeckers create their own cavity nests, while owls and kestrels use existing cavities, either made naturally or by other animals. When a pair of nesting kestrels are looking for a nest, the male will find several suitable cavities. The male kestrel will then show the female kestrel all of the prime real-estate he’s found, and she’ll pick the one that looks best to her. Kestrels don’t use nesting materials, and the same nest site is often used in successive years. 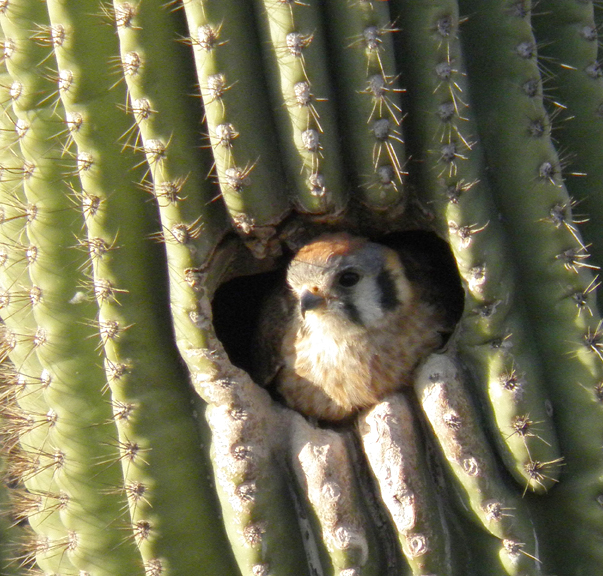 What kind of nests do Bald Eagles have? Bald Eagles, along with ospreys, egrets, herons, and a number of other raptors, build platform nests. A platform nest is a relatively large nest structure that is either flat or has a shallow depression, but not enough of a depression to be considered a cup. Bald Eagles build the largest nests of any North American bird species. When a nesting pair first starts out, their nest is relatively small. The nest size increased every year as the nesting pair returns to add sticks and strengthen the structure. The largest recorded bald eagle nest was 9.5 feet in diameter, 20 feet deep, and weighed nearly 3 tons! 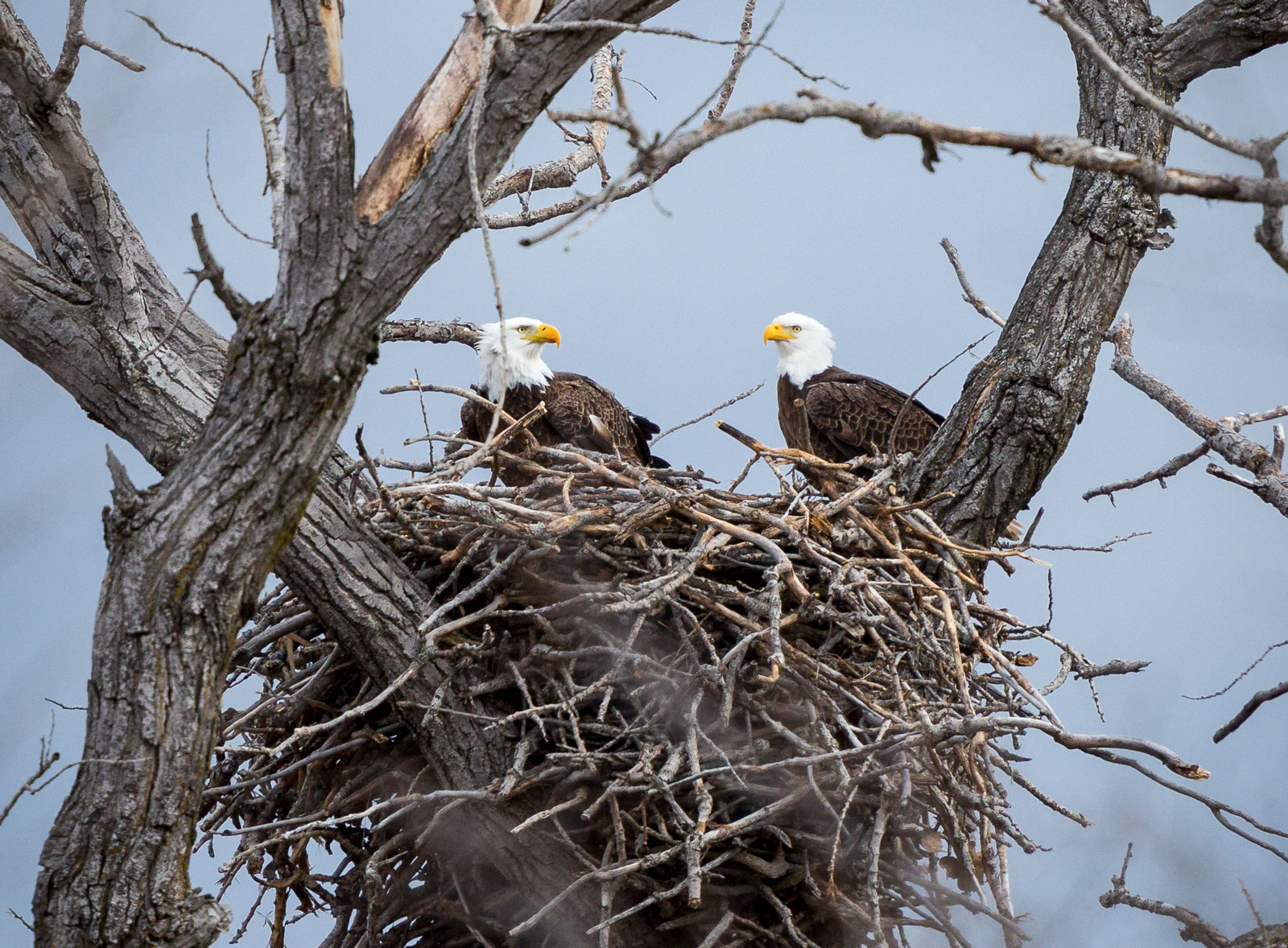 Do any birds nest on the ground? Yes, some birds nest right there on the ground. One example of a bird that sometimes nests on the ground is a Turkey Vulture. They utilize a type of nest called scrape nests, which are typically slight indentations on the ground, usually high up on cliffs or inside hollow trees. Turkey vultures will scrape out a spot in the dirt, sand, or leaf detritus to lay their eggs. They’ve been known to come back to the same nest site year after year to lay their eggs. Other examples of birds that utilize scrape nests are shorebirds, terns, and gulls. 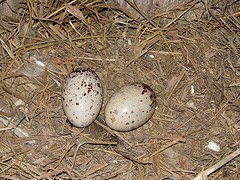 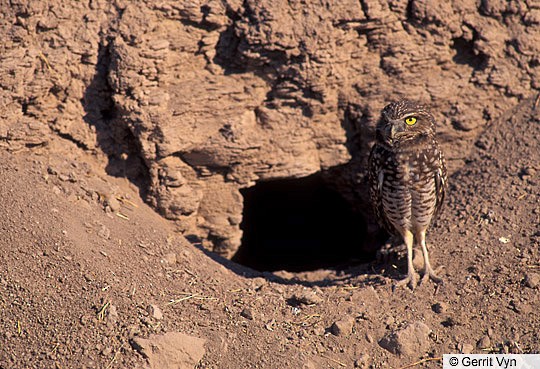 The Gila woodpecker is a true avian builder, accomplished at creating cavity nestsin saguaro cacti. The other day I watched some of this work going on over at Gilbert Riparian Preserve.  The male woodpecker, identified by the red patch on his crown, clutched the bottom edge of the cavity firmly with his talons.  His long tail was stiffly braced against the golden spines of the cactus.  He reared back his head and used the leverage afforded by his position to hammer at the green skin of the saguaro, breaking through the outer layer.

After that, things went a little easier.  He quickly enlarged the hole, reaching inside with his formidable beak to scrape and probe, pulling his head out to shake off the juicy bits of saguaro flesh.  Soon, the woodpecker had excavated the cavity enough that he was leaning far inside to do his work.

Once the cavity is 9-18 inches deep, the Gila woodpecker leaves it alone to cure.  The inner parts of the saguaro will callus over in a couple of months and then the nest will be ready for use.  The female lays three to four white eggs in the bottom of the bare cavity in April or May.  About two weeks later the nestlings hatch. The parents feed the noisy hatchlings insects, berries and fruit for a month in the nest. Even after they fledge, mom and dad continue to feed and watch out for their young, sometimes caring for overlapping broods.

The Gila woodpecker and the saguaro cactus are both important species in the desert ecosystems of Southwest Arizona, Baja and Northwestern Mexico.  The birds feed heavily on the fruits, nectar and pollen the cactus provides in May and June when the babies are growing.  In return they provide pollination for the saguaro, and cavity homes for many desert creatures.

Gila woodpeckers are threatened by habitat loss as human development takes out desert land, and also by the intrusion of European Starlings.  These non-natives steal cavity nests and crowd out native babies.

This vibrant woodpecker is generally prominent in the landscape, with a bounding flight, noisy back and forth calls from the tops of saguaros, and a habit of territorial drumming on human homes.  I was thrilled by the opportunity to see this demonstration of cavity nest building.

And…in case you are wondering, the Gilded flicker is the only other native bird that makes cavity nests in saguaro cacti.

A bird’s feather coloring distinguishes it from other species of birds. Occasionally, the mechanism that produces normal coloration breaks down resulting in either lack of color or too much of it. The main coloring agent  is melanin and the amount of melanin present determines the color and intensity of the final color.  Abnormal coloration can occur in not only birds, but mammals and reptiles as well.

Albinism is caused by a genetic mutation.  Both parents must be a carrier of the albino gene, but do not necessarily have to be an albino themselves.  Melanin is unable to be produced.  An albino bird or mammal has whitish pink fur or feathers and eyes with reddish pupils because the blood vessels are visible through the tissues. They also have pale colored skin, legs, and feet. Birds have a pale colored beak.  Albinos are rare in the wild, tend to be weaker, have poor eyesight, and generally don’t tend to survive to adulthood.  They are also prone to predation due to their color. 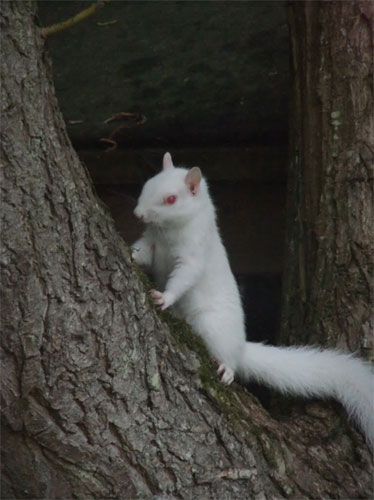 Leucism is a genetic condition resulting in total or partial loss of pigmentation. This is more common in birds.  They will have normally-colored eyes, legs and beaks. There are degrees of leucism:  1) Overall white plumage with little or no color visible. 2) Paler overall plumage looking diluted or bleached. 3) Bold white patches where the bird should not have any.  Birds that show only white patches or sections of leucistic feathers, often in symmetrical patterns, are usually called pied or piebald or partially leucistic while birds with fully white plumage are referred to as leucistic birds. 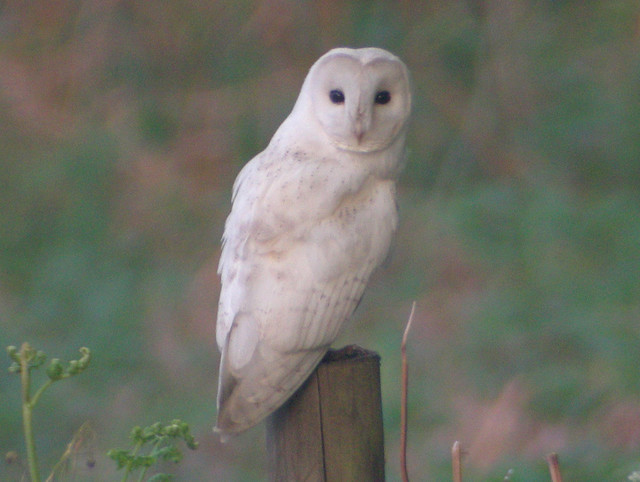 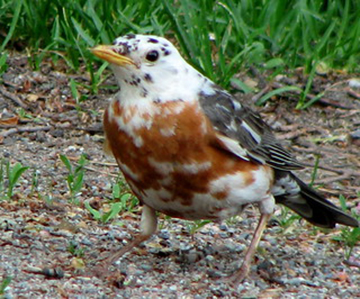 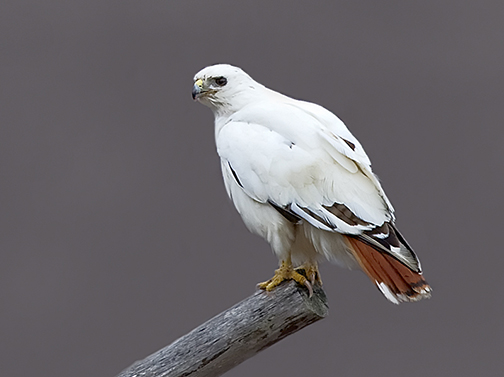 Melanismis also hereditary and results in an excess of dark pigmentation in an animal.  Melanism is found in many different species. The “black jaguar” was once thought to be a separate species but is now known to be a melanistic version of the same species. Melanistic birds usually appear dark brown or black.  These birds tend to be more robust. Melanin makes feathers strong and durable. It helps the eye to function properly, protecting it from damaging UV rays.  Melanism can also be caused by dietary factors. For example, a bird on a diet rich in hempseed with a high oil content can turn black in color. 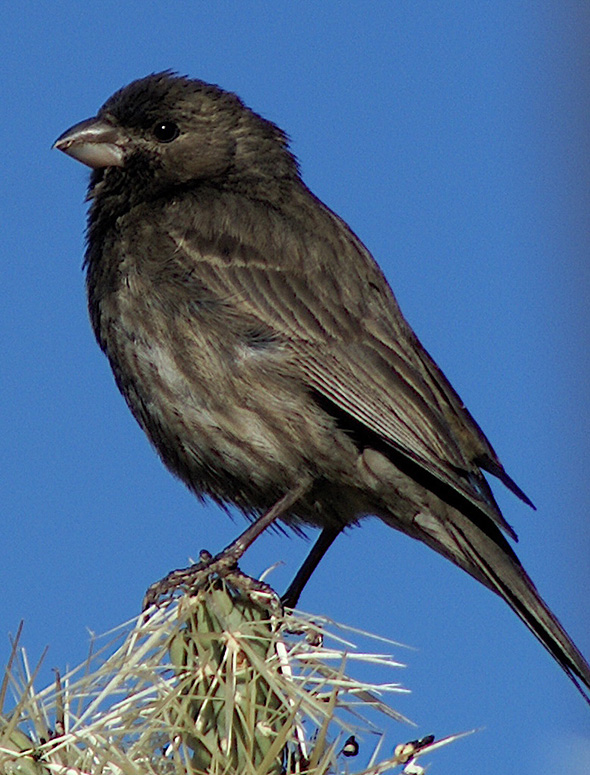 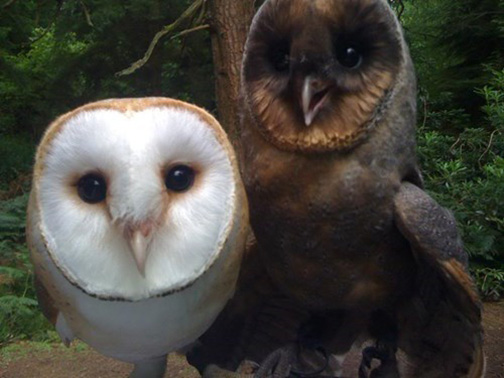 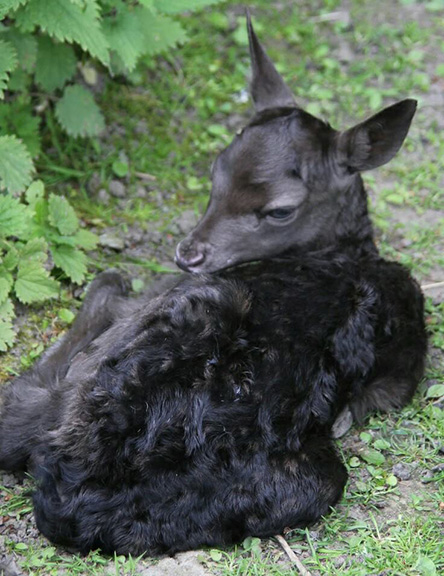 The red of the Northern Cardinal comes from a class of pigments called carotenoids also responsible for the bright yellows seen in goldfinches and yellow warblers.  An albino bird may still have colored wings or chest, but will have all the other albino characteristics.

Leucism can skip a generation. Birds affected by leucism tend to have weaker feathers that can wear out faster than normal-colored feathers. This can result in flight issues, hampering a bird from escaping a predator. Sometimes these birds are not accepted by their own species.

Iridescenct blues and greens are not pigments, but are seen as light reflects on the complex structure of the feather. These are structural colors. The final color is often a combination of an underlying pigment and the structural color. The true color of many iridescent feathers  is black or brown, so if a bird is seen in very low light, it appears dark in color.

For those of you lucky enough to spot a pure-white bird, remember to check eye color, feather color can be deceptive.

Look up at the saguaro cactus! Do you see a Gila woodpecker?

If you spot a Gila woodpecker, he may be as busy as this one, making nest holes or catching insects!

The saguaro cactus is home to other animals, too!

This book is about a saguaro cactus named Sammy, who becomes ill and needs help. Dr. Bird is a Gila woodpecker who helps him.

Check out this puzzle picture of two Gila woodpeckers!