In December many humans attend holiday parties, string glittering lights and draw up gifting lists. In the parallel universe of nature however, there are a few species of wild birds making equally fevered preparations for something a bit more serious, mating season. Some desert species have found it advantageous to breed in the winter months, and experts see the season getting earlier every year. 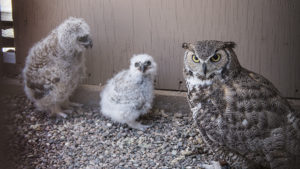 Great horned owls are among the most conspicuous early nesters, hooting incessantly at dusk and in the early mornings, advertising their territories and wooing mates. It’s a bit of a misnomer to call this impressive predator a nester though, as great horned owls generally don’t build nests. Instead, they may make use of nests built by other species, such as red-tailed hawks. The hawks won’t be thinking about nesting for another month, so it’s an advantage for the GHOs to move in early.

In addition to pre-built hawk nests, these owls find cutbacks in banks, high fronds of palm trees, or large cavities in trees perfect locations for laying eggs. In urban and rural areas man-made structures often provide what seems to be the ideal nesting ledge. In dense areas these locations may lead to trouble when the fledglings begin “branching”. Great horned owl fledglings get adventuresome and start pushing and shoving a bit in the nest as they grow, often ending up on the ground.  The parents continue to feed and guard them during this awkward stage, but if there is a busy street or other hazardous situation nearby, a baby owl may require rescue.

Great horned owls mate for life and hold the same territory year after year if possible. Some live in the same area twenty years or more. Courtship begins in late November or December, with the two owls bowing to each other and hooting duets. The male brings tasty morsels to the female in attempts to further impress. Eggs are laid sometime between January and March. The female stays on the eggs and incubates while the male hunts. 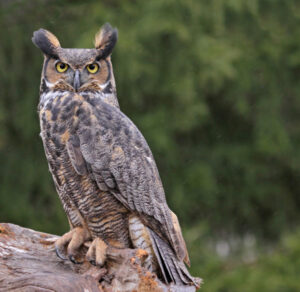 Great horned owls are top notch hunters, known as tigers of the sky, but it takes quite awhile for the youngsters to learn to master flight and predation skills. Even after they are flying and hunting on their own the juveniles remain in the same territory with the parents. In November or December they finally set out to establish their own territories, right about when mating season is underway again.

Another December nester falls at the opposite end of the size spectrum. Anna’s hummingbirds are known to be the earliest of nesters. This tiny bird engages in dynamic courtship displays, with the male hovering, giving a buzzy song, then shooting high in the sky before diving steeply back toward the female. He may also zoom back in forth in front of her, impressing his potential mate with his stellar flight abilities.

Anna’s that winter in cold weather areas benefit from the extremely well insulated nests they build. Temperatures inside the nest can be 40 degrees warmer than outside. This keeps the eggs warm and helps the female conserve energy. Within two weeks of hatching a baby hummer has grown a downy coating of feathers that allows it to maintain its own body temperature. 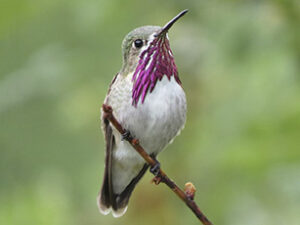 Winter flowers provide nectar and the season’s insects are an important protein source for the babies. The female must provide ample fuel to power the quick growth and feather production of her young. The warming days of spring signal the end of breeding season for this species in our region. Other winter nesters begin the mating process in January and February, including Harris’s hawks, red-tailed hawks, barn owls, and members of the dove family.

The American Kestrel is the smallest falcon found in North America. Their range extends from Alaska to South America. They can be found in urban areas, deserts, open fields, and forest edges. Kestrels measure 9-12 inches in length and weigh 3-6 ounces. It is one of the few raptors that show differing plumage in the male and female.

The kestrel hunts from perches but can also hover in place. Their prey is primarily large insects, but also small rodents, small birds, reptiles and amphibians. They are cavity nesters, in Saguaros, trees, buildings, and nest boxes. 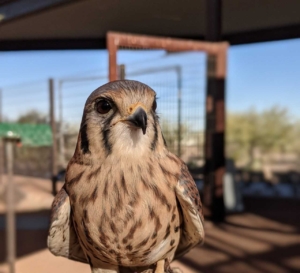 Lexi arrived in 2009 from Phoenix as a juvenile with a left wing fracture (due to improper diet, having been kept illegally). 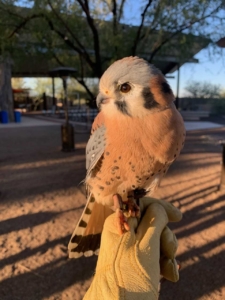 Veto came to us in 2008 from Phoenix as an imprinted juvenile. A well-meaning individual had found him and hand fed him for 3 weeks before bringing him to Liberty. 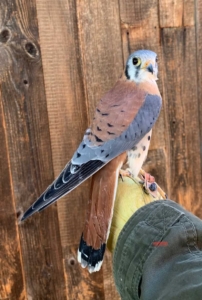 Tyrion was brought to us in 2014 from Ft. Mohave with an old healed left wing fracture that required partial amputation. 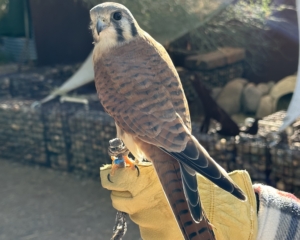 Iris arrived in 2017 from Mesa as a juvenile with an injury to her right eye. She subsequently lost that eye.

Aldo (not pictured) came in 2018 from Avondale.

Sansa (not pictured) arrived in 2015 from Lake Havasu.

Chiquita (not pictured) arrived in 2016 from Bullhead City.

Come on down to visit and hear their stories!

They discovered problems with water being wasted and either fixed it themselves or got some help.

They saw litter on the ground and picked it up or they found a new way to reuse something.

This year the Superheroes helped to clean up litter along the Rio Salado. 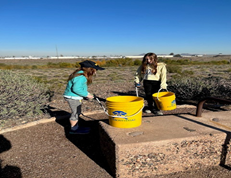 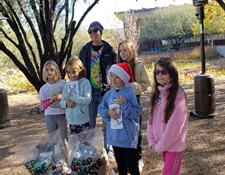 Everyone got a 3 R’s Superhero sticker!

Liberty Wildlife’s 3 R’s Superhero sticker is given to kids who reduce, reuse, and recycle stuff.

Superheroes know that all living things need water, food, shelter, and space to thrive in their habitat.  What can you do to help the living things in your yard or nearby park?

Is there food and water for

and other living things in your yard?

Liberty Wildlife Superheroes have been working to make their backyard or schoolyard wildlife friendly by making pollinator gardens and creating habitat journals that show how they’ve helped nature. 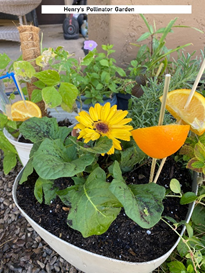 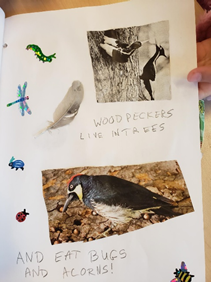 The Liberty Wildlife Superhero Club will not be meeting in January to encourage all members and their families and friends to attend the OdySea Aquarium on January 14th, 2023 for the 5th annual Conservation EXPO!  It’s free!

You can visit over 30 organizations in the Arizona Boardwalk Courtyard that support nature.

Our next meeting at Liberty Wildlife is Saturday, February 11th at 9:00 AM.