As a kid, I absolutely loved animals. I would put on my little safari outfit and go searching all around the neighborhood for bugs, lizards, snakes, or anything else I could get my hands on. I went to the Audubon Zoo in New Orleans every year for summer camp. As an animal lover, I begged my parents to get as many animals as possible. We didn’t have a dog, but they eventually relented and let me get a snake and then two red-eared slider turtles. The turtles weren’t much fun, since you couldn’t really play with them, but I loved my snake. And then, in 2005, Hurricane Katrina hit New Orleans. 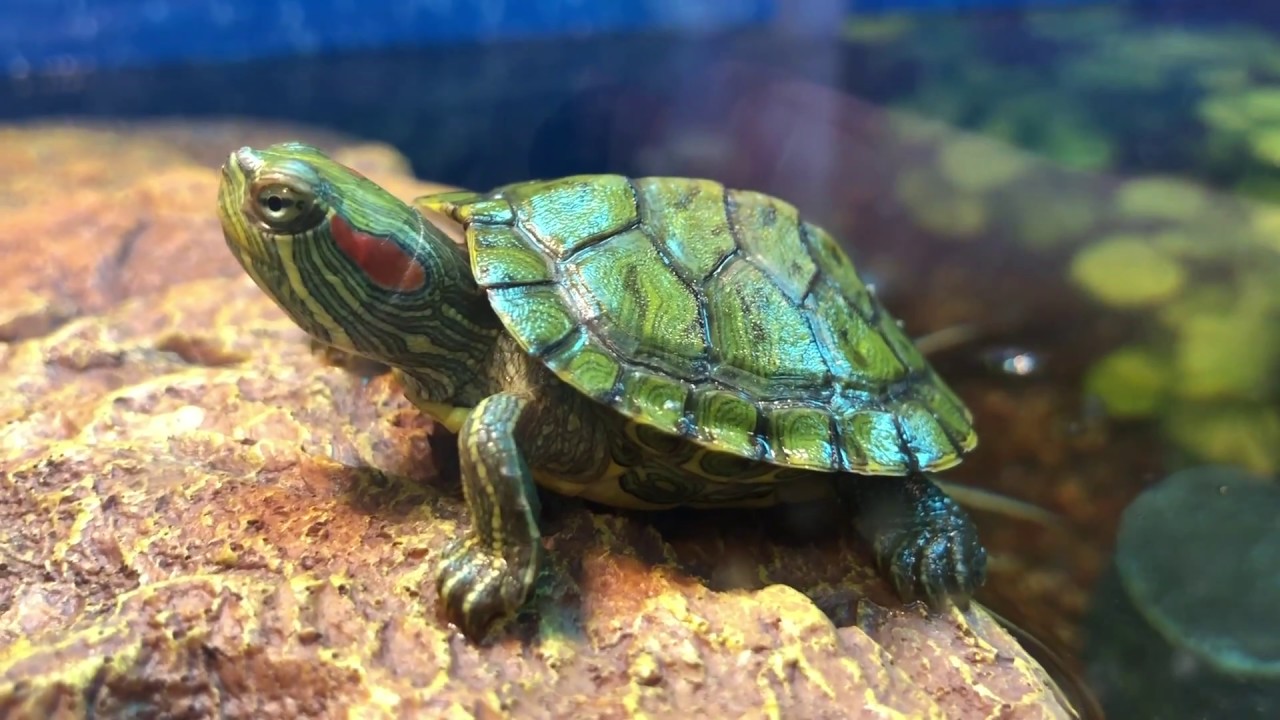 evacuated, but we couldn’t bring the snakes or the turtles (I can’t really blame my parents, managing 3 boys is bad enough). We’d only had the turtles for a couple of months, so they hadn’t yet reached their full size. I can’t say what happened to the turtles, but since the whole first floor was completely flooded, I like to think they just swam away. Many people adopt red-eared sliders because they are cute when they’re hatchlings, but then they get bigger and people find themselves unable to properly care for them any longer. So, what do you do with a pet (excluding cats/dogs) you can no longer take care of?

Never release a pet into the wild. Here in Arizona, red-eared sliders are considered invasive. They outcompete the local turtles for resources and can be very detrimental to the ecosystem. Even in New Orleans, where red-eared sliders are native, releasing them back into the wild could expose local populations to diseases that the captive turtles might be carrying. If you have a red-eared slider, or any other reptile, that you can no longer care for, you can take them to the Phoenix Herpetological Society (for a small fee). There your turtle can live out the rest of their turtle lives with plenty of turtle friends. Additionally, if you are looking to adopt a turtle or tortoise, you can adopt young desert tortoises from Arizona Game and Fish. But be aware- desert tortoises live a very long time (50-80 years) and require a burrow to hibernate in during the winter.

Easter just passed, and with it, many people may find themselves with bunnies or chicks that they realize they can’t properly care for. If you are going to buy a bunny or chick for Easter, please ensure that you will be able to properly care for it when it grows up. Releasing ducks that you bought as a chick into your local pond is not a good idea, because they often can’t compete with the wild ducks for food and may spread disease to local populations. The same goes for bunnies. They likely won’t know how to survive in the wild. I get that bunnies and chicks are super cute, but they take a lot of work when they get older. If you want to be around bunnies and baby birds, consider volunteering at Liberty Wildlife in the Orphan Care department. You can be around cute baby birds and baby mammals, but afterward, you get to go home and not worry about taking care of them when they grow up!

In early March, about when the Coronavirus was beginning to rock our world, a couple of turkey vultures started hanging out on the rocky ledges behind our home.  As we sheltered at home, we watched these elegant fliers soar for hours in the clear skies, hardly shifting a feather.  Despite the appearance of macabre foreshadowing, the arrival of turkey vultures in the spring is normal for the Sonoran Desert. 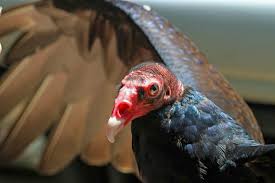 We hope the two vultures are preparing to nest up there in the rocks.  There is a peak where they can survey the surroundings, some reliable thermals that lift along the south-facing exposure, and a hidden ledge they take turns disappearing into.

Turkey vultures mate for life, and may live 16 years or more.  Only a limited number of adult vultures from the total population will breed in a given year, but a couple usually has a favorite nesting site they return to.  Maybe this is this couple’s first breeding season, as we have never seen turkey vultures hanging around the neighborhood before.

Turkey vultures are known to be the sanitation crew of the desert, they eat dead things.  They do prefer fresh meat, but acids in their digestion system are capable of killing bacteria, so even if the meat is a bit off, the vulture will still enjoy its meal.  And after eating, there is minimal clean up for the bird because its head is bald, no feathers for nasty gunk to get tangled in. 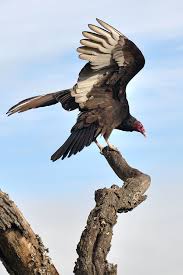 Because they have no control over when things die, nature has allowed vultures the ability to go for days on end without eating.  They manage this by expending very little energy while they search for food.  With their six foot wingspan the vultures soar and soar without effort.  They are beautiful in flight.  The vultures search for food by sight.  They also have a sense of smell which is unusual for birds, but comes in handy for turkey vultures as you can imagine.

If this pair does breed, the female will lay two eggs that must be incubated for up to 40 days.  The parents take turns at this task, holding down 24 shifts on the nest.  When the nestlings hatch they are covered in white down.  The parents feed them by regurgitation, for 70 days or so until they fledge.  They start out with short practice flights, exploring the area, and continuing to rely on the parents for food.   Hopefully, by early July we will get to see some youngsters trying out their wings.

Turkey vultures cope with extreme heat with urohydrosis.  They pee on their bare legs and enjoy built-in evaporative cooling.

Not just a pile of sticks, nests are truly a marvel of nature. Nests can be as big and heavy as a car, like an old eagle’s nest, while some can be tiny as a walnut like the nest of a hummingbird. 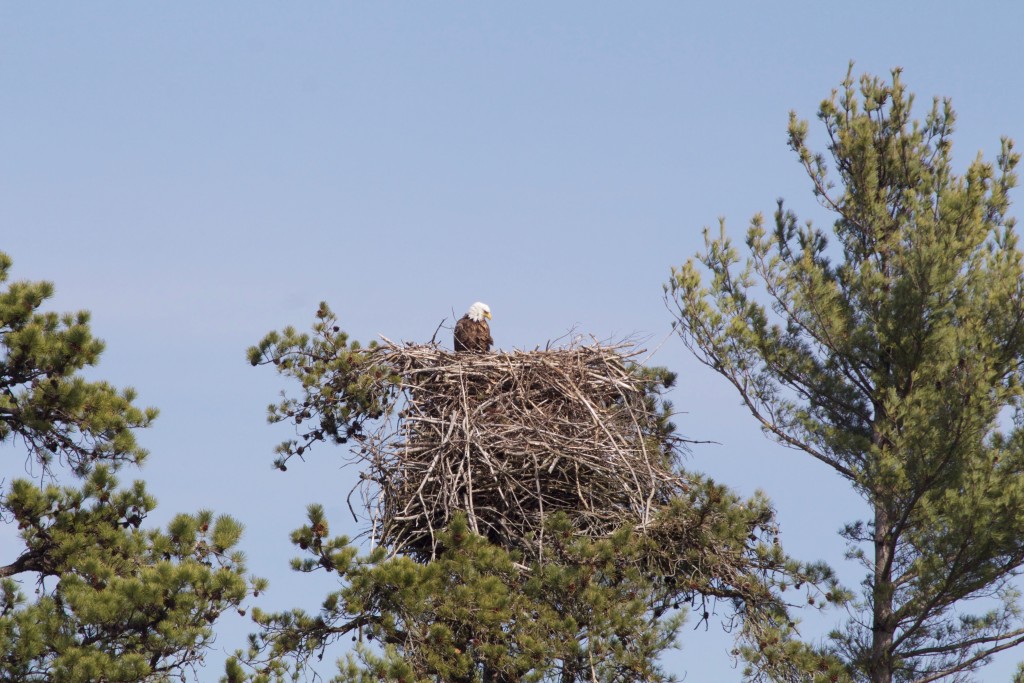 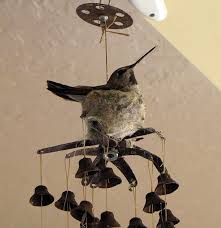 Bald Eagles Build Strong Nests and use them year after year. They make improvements and add to the nest, it can weight over a ton! Nests have been found to be 10-15 feet deep and estimated to weigh 2 tons!

Many birds “glue” their nests together with materials like spider webs (to give the nest stretch for expansion as the nestlings grow), silk, mud, lichen (for camouflage) and even their own saliva. A swallow’s mud nest can take up to 1200 trips to build. 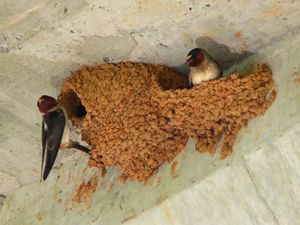 Many birds use aromatic plants such as lavender, mint, evergreens, eucalyptus, and grasses to line their nests. They will refresh these plants throughout nesting. It is thought the plants help fight off bacteria living in the nest debris. Some birds have been seen to use cigarette butts in their nests. Possibly the nicotine helps to deter parasites. 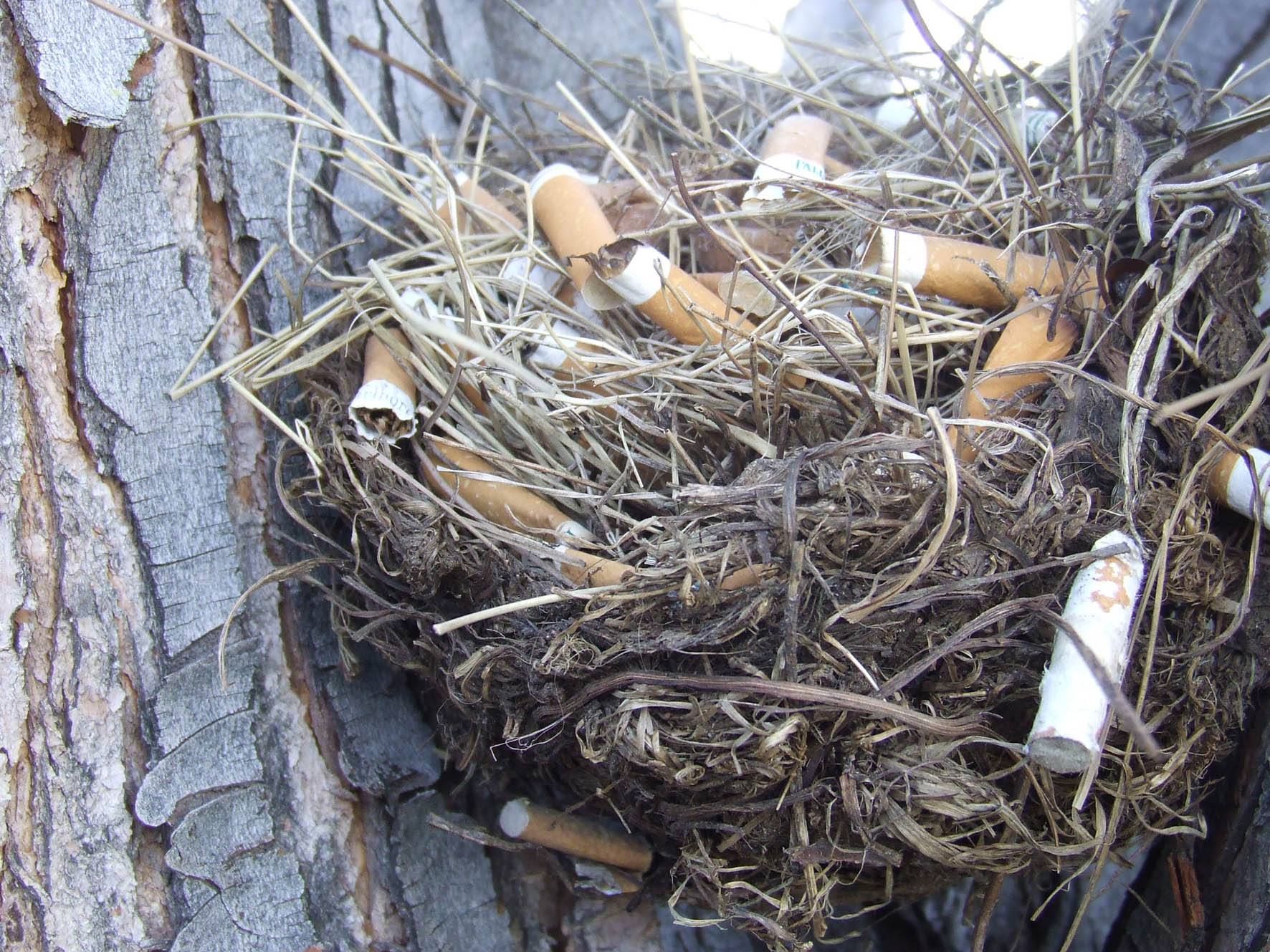 Most cup nesters use rough, scratchy material for the outside (this gives protection and camouflages the nest), and put soft materials like moss, fur, feathers, and cotton on the inside. Tufted Titmice often line their nest with animal hair. They have been known to pluck those hairs from live animals.

Not all birds build nests. Cowbirds lay their eggs in other birds’ nests and the hatchlings are raised by the host parents. 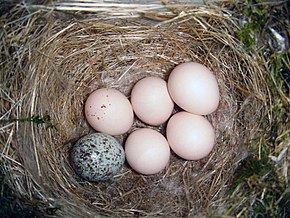 Some birds will use abandoned homes from other animals. Burrowing owls are known to use prairie dog burrows to raise young. Burrowing owls will also use man-made burrows. 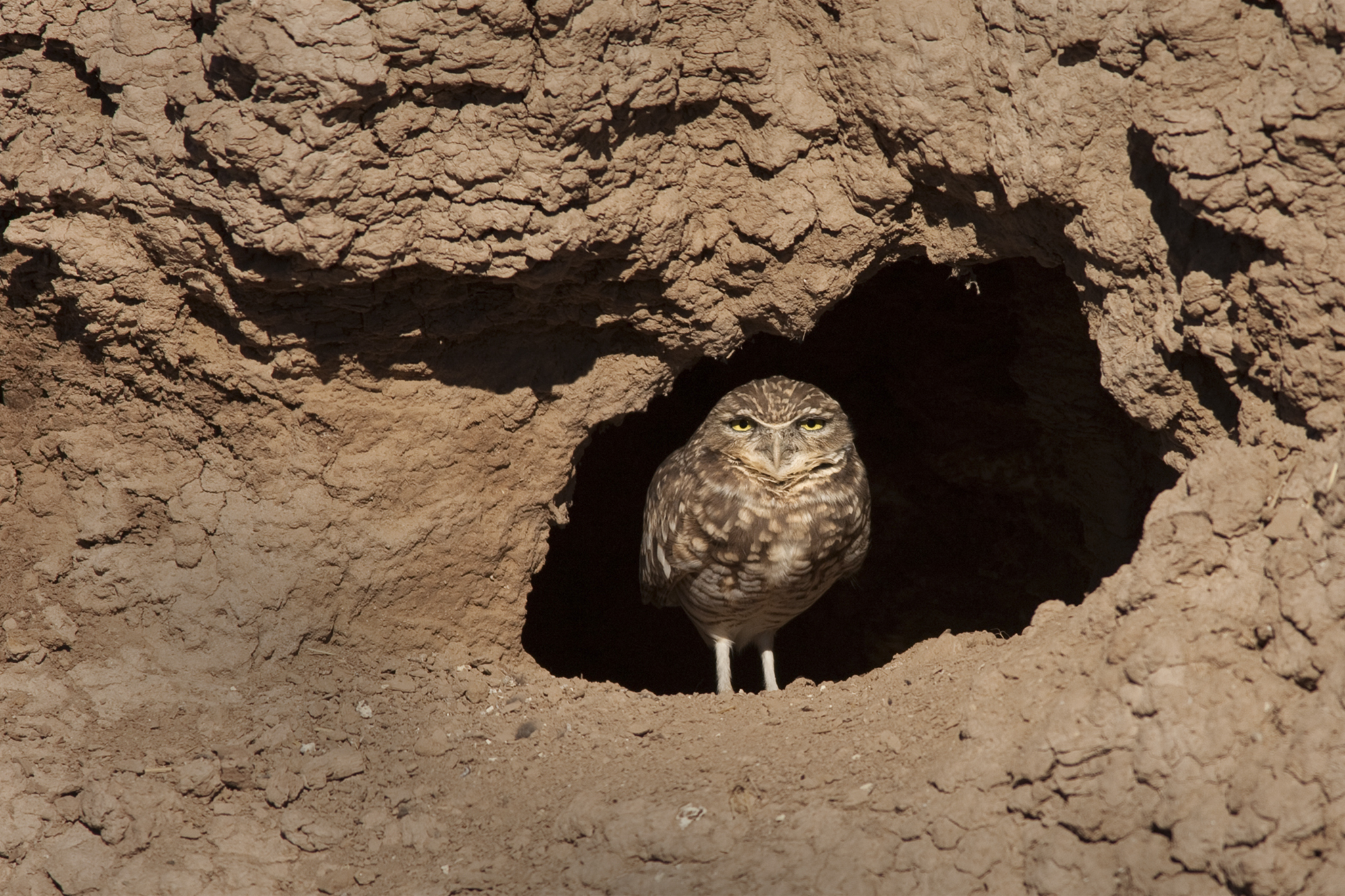 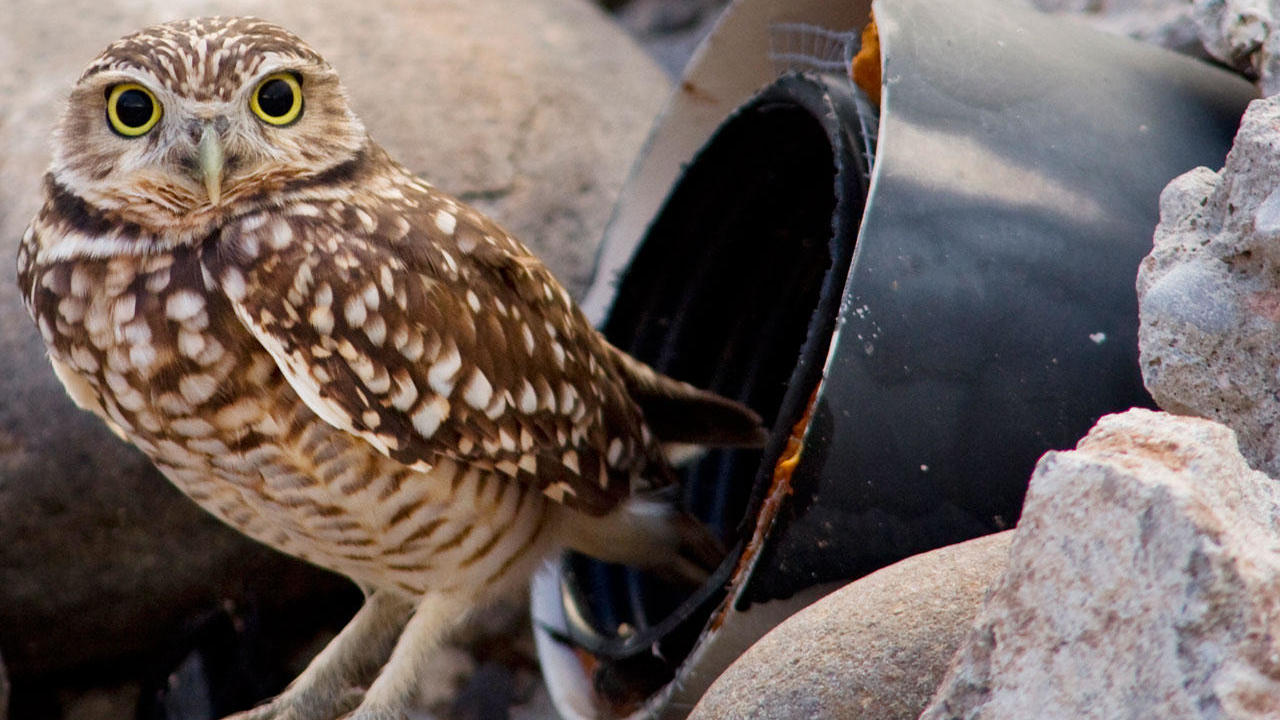 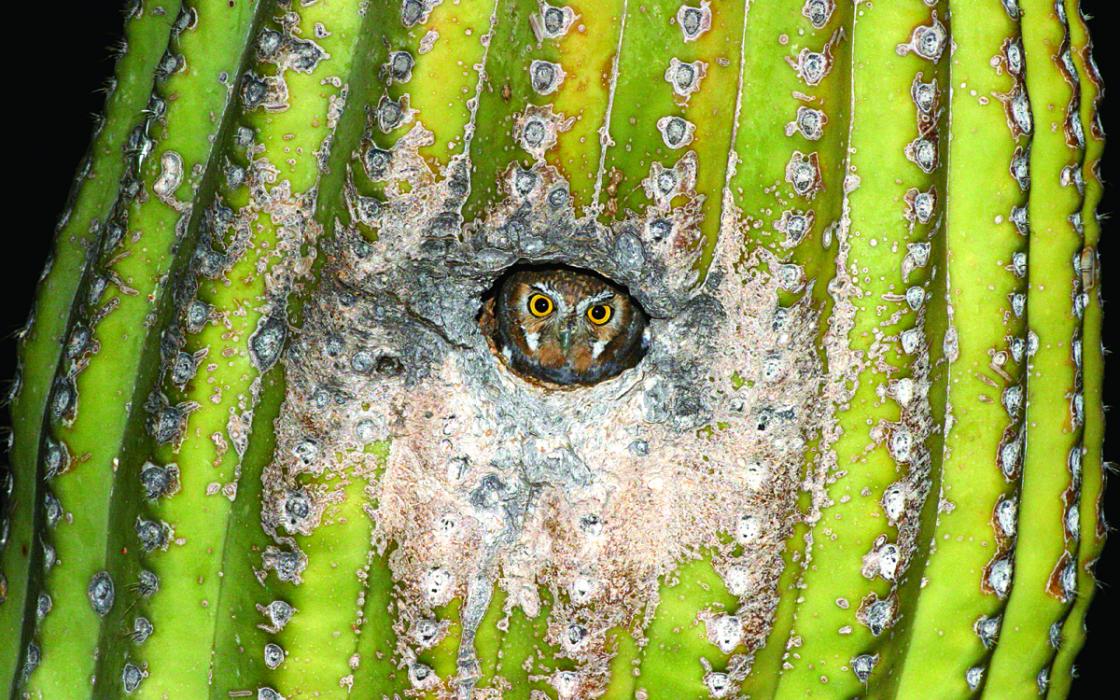 Many cavity-nesting birds like wood duck will use nest boxes. 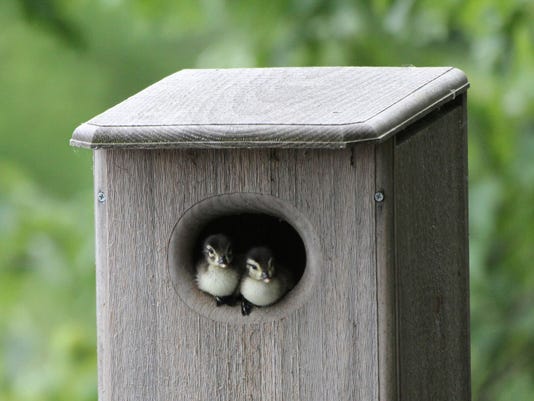 Nest sites can be used repeatedly, often building right on top of the old nest. An active Gyrfalcon cliff nest was radiocarbon dated to be around 2500 years old.

Nests come in a variety of shapes and sizes. Some birds even nest communally. 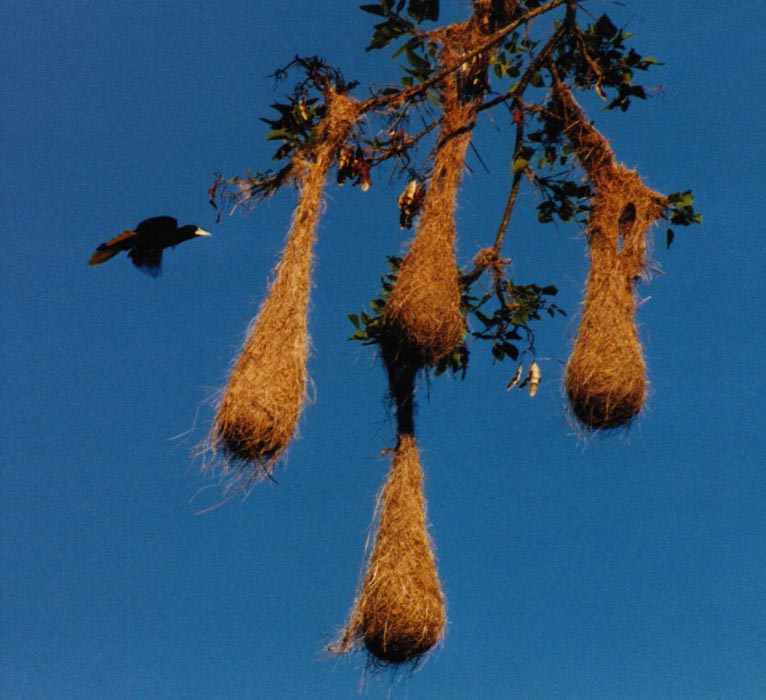 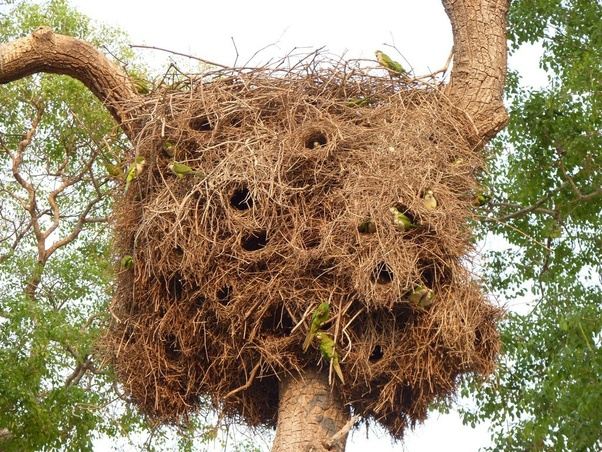 Often multiple nests are built by the male. The female will then choose what she feels is the best nest. The verdin builds nests for both breeding and roosting. The roosting nests help it stay warm in winter. Abandoned roosting nests are often used by other birds in the winter for warmth.

For protection from predators, many desert-dwelling birds build in a cholla cactus, palo verde, or other desert vegetation where the nest is surrounded by thorns. 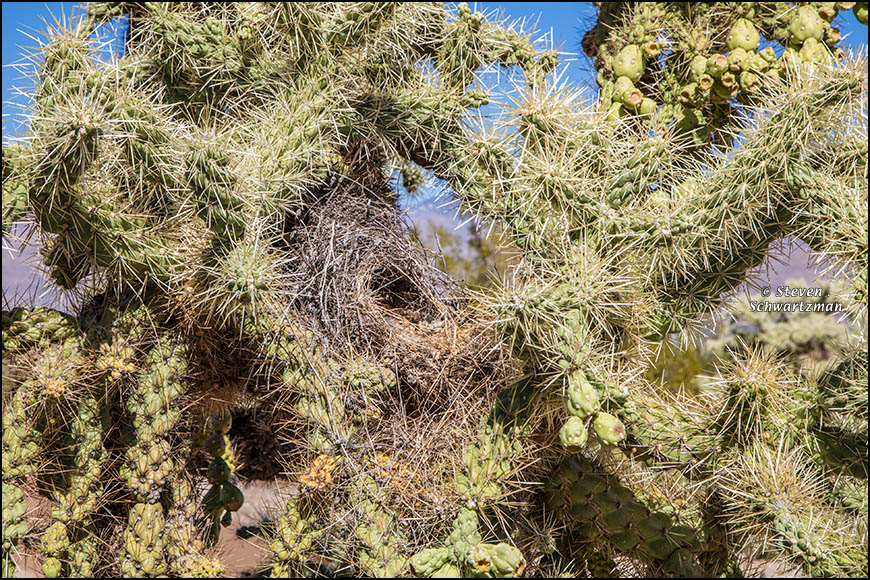 A few water birds (like grebes and loons) build platform nests right on the water, where they can float. The nests are anchored to plants that are attached to the bottom of the body of water. These birds build nests on water because they don’t walk well on land, so they can swim to their nests. 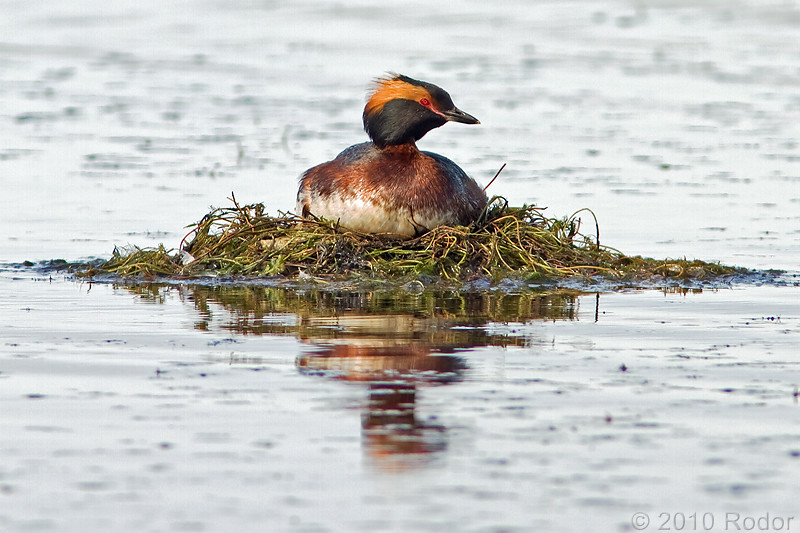 Shorebirds align the pointed ends of their eggs toward the center to pack the eggs into the tightest space for incubation.

Cliff nesters such as Peregrines and some seabirds have an oblong shape of the egg which allows it to spin in a circle, making it less likely to roll off the ledge.

In some species of birds, the nestling waste products are discharged in a mucous membrane called a fecal sac, generally white or clear with a dark end. The parents keep the nest clean by removing these far away from the nest. 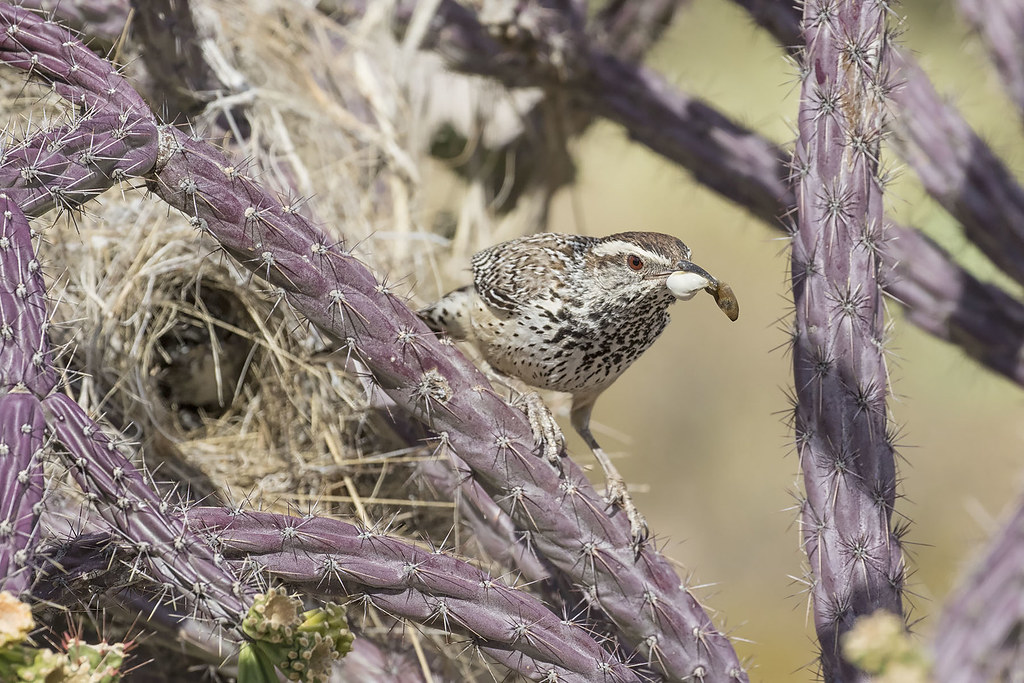 Screech owls bring live blind snakes to their nestlings. Some of the snakes are eaten, but most live in nest debris, where they eat soft-bodied insect larvae from the decomposing nest debris.

Nests can be built in (what seems to us) the oddest places. 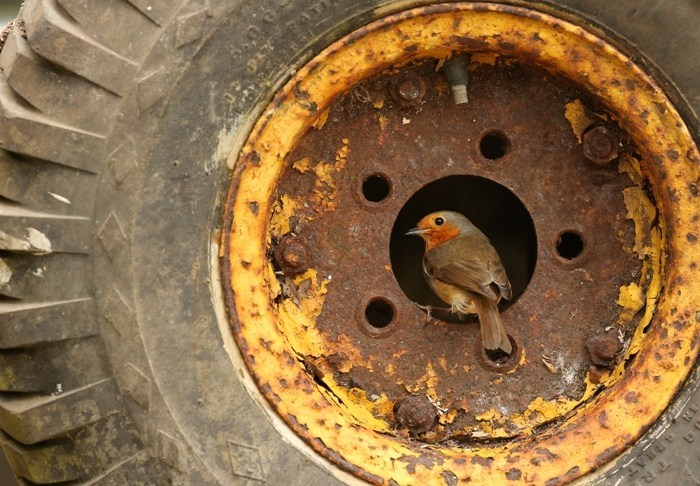 Baby birds have brightly colored beaks and mouths that show the parent where to put the food. 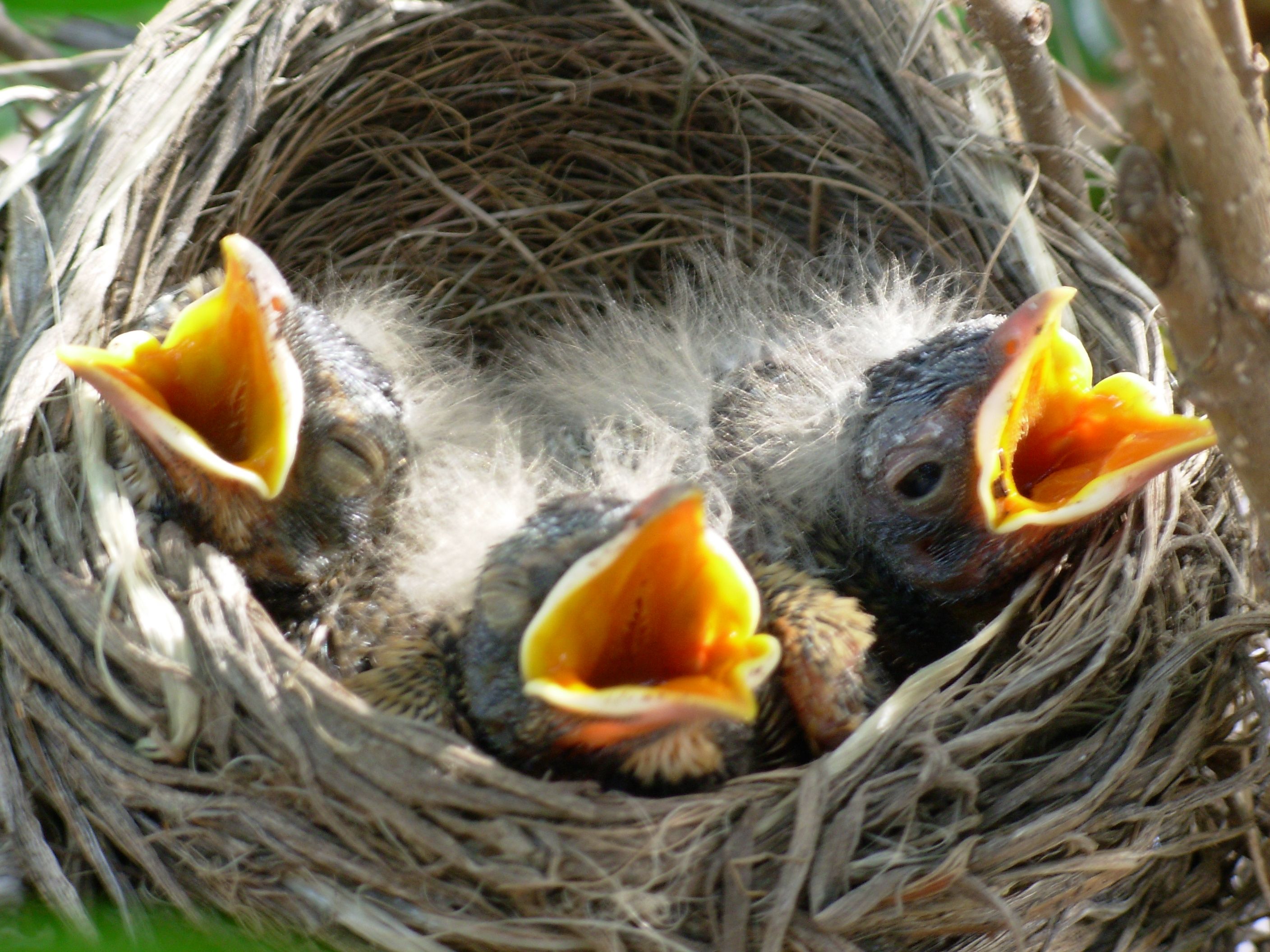 Bird nests are everywhere and you’d be surprised at what they look like! Get outside with binoculars or a camera and see if you can spot some near where you live. Be sure to look at the links below about nests.

Here are some interesting birds’ nests to find.

Get answers to questions like “Why do birds leave the nest before they can fly?” or “If I handle a baby bird, won’t it’s parents pick up my scent and abandon it?”

What do you know about turkey vultures?

These two videos are helpful!

Here’s a video and read-a-long story called “The Tale of a Turkey Vulture Family”.

Nature News May 2020
Scroll to top