A Flush of Life

After two years of no monsoon, this summer’s rains have resurrected the insect world.  In August iridescent dragonflies bombed along near South Mountain, hovering a couple of feet from the desert floor. These creatures spend their early life underwater as aquatic predatory juveniles. One day the larvae climb from the water and burst from their exoskeletons, fully winged and highly engineered flying machines. Dragonflies in the desert tell fantastic tales of water and transformation.

In early morning, shafts of sunlight glint on spiderwebs. The sturdy strands, spun from spinnerets located along the spider’s body, emerge as liquid proteins, and with tension solidify into a web. Each spinneret delivers a slightly different type of silk. Today a spotted orbweaver hangs in the center of her web, stationary but for the breeze.  Near her rests a mummified form, the spider’s bound and drained prey.  I’ve watched an orbweaver deftly wrap a bee, using her antennae-like pedipalps. Spiders taste and smell with these pedipalps as well as through special sensory organs on their legs. They sense vibrations, their form of hearing, through hairs and tiny slits on their bodies. 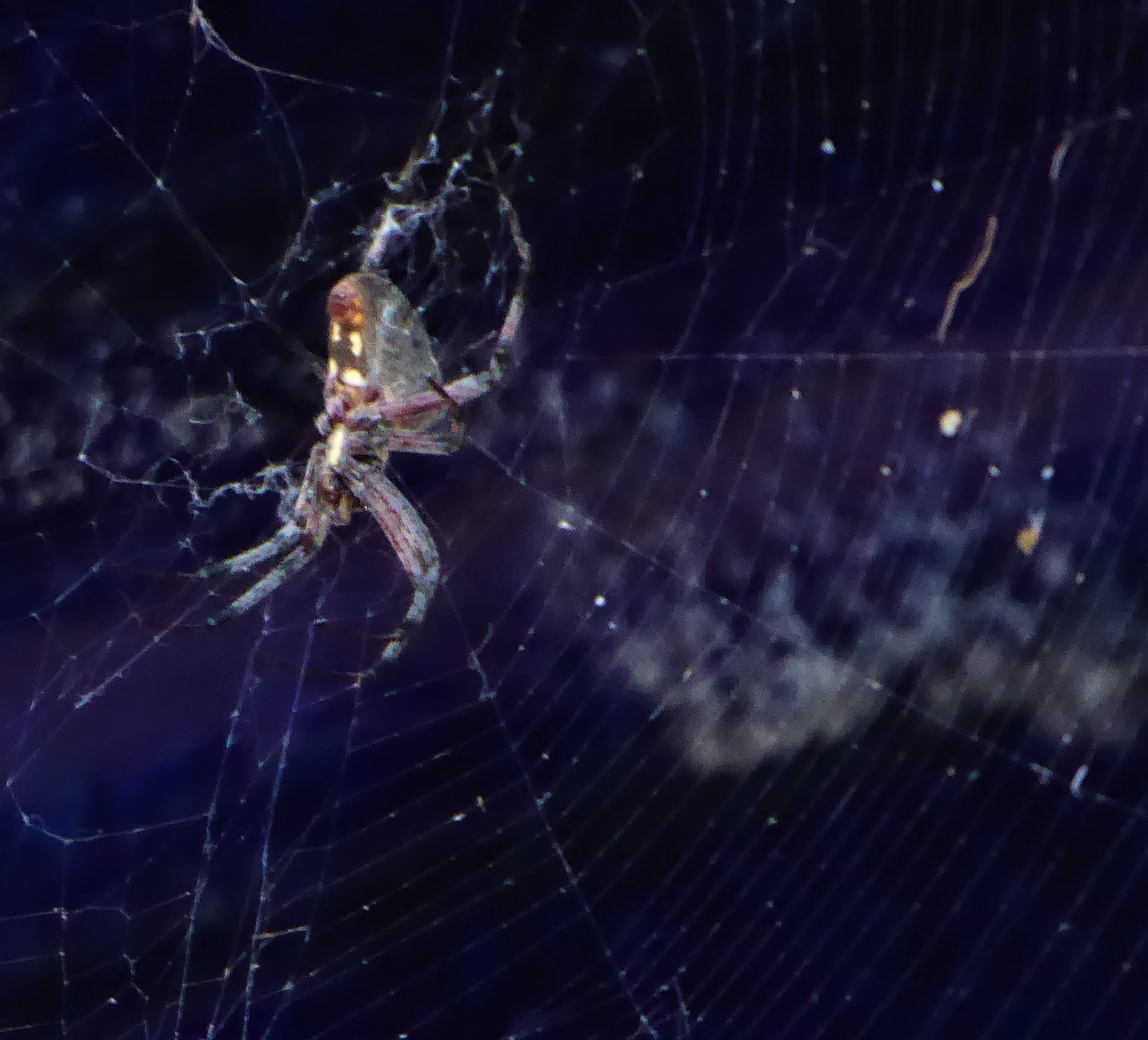 Bright yellow with red horns, Sphinx moth caterpillars were garish in the brown July landscape. As they marched, their plump bodies rolled with every dimple in the desert soil. No obstacle deterred the caterpillars as they trundled on, hellbent on their mysterious destinations. Two months later White-lined Sphinx moths appeared, hovering near the chuparosa and desert lavender, mingling with and nearly as large as feeding Costa’s hummingbirds. 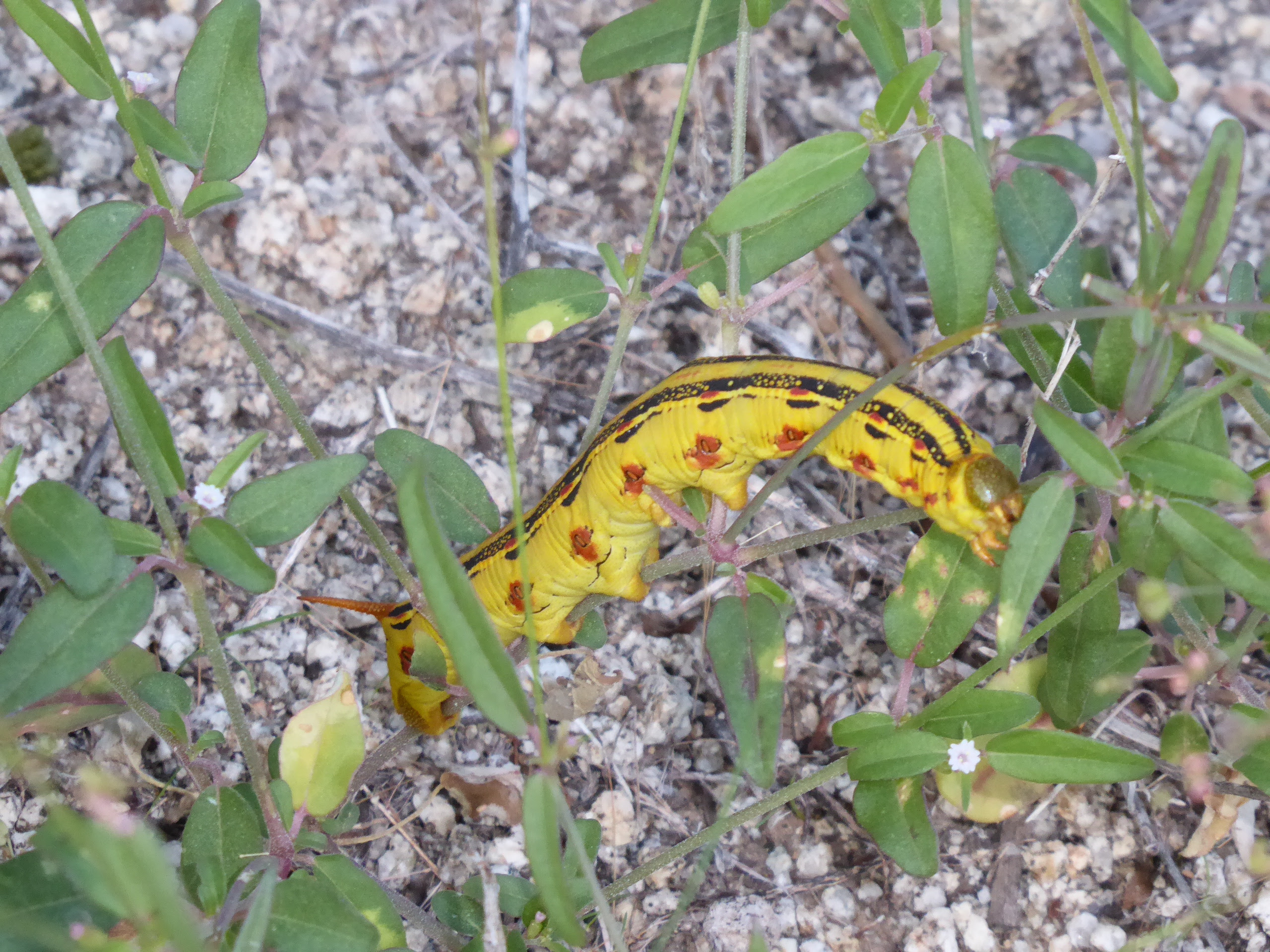 In October a praying mantis appeared on the warm slate of our front sidewalk. Hard to recognize as an insect, here was an assortment of green twiglike limbs moving cautiously forward, triangular head turning side to side. Unearthly creature. Under scrutiny, her lime-colored abdomen curved over her back and cupped a brightly colored flag, her “bluff” to scare us away. Praying mantis are insatiable predators and will consume many insects, even each other. They have been known to also prey on small rodents, lizards and even hummingbirds. 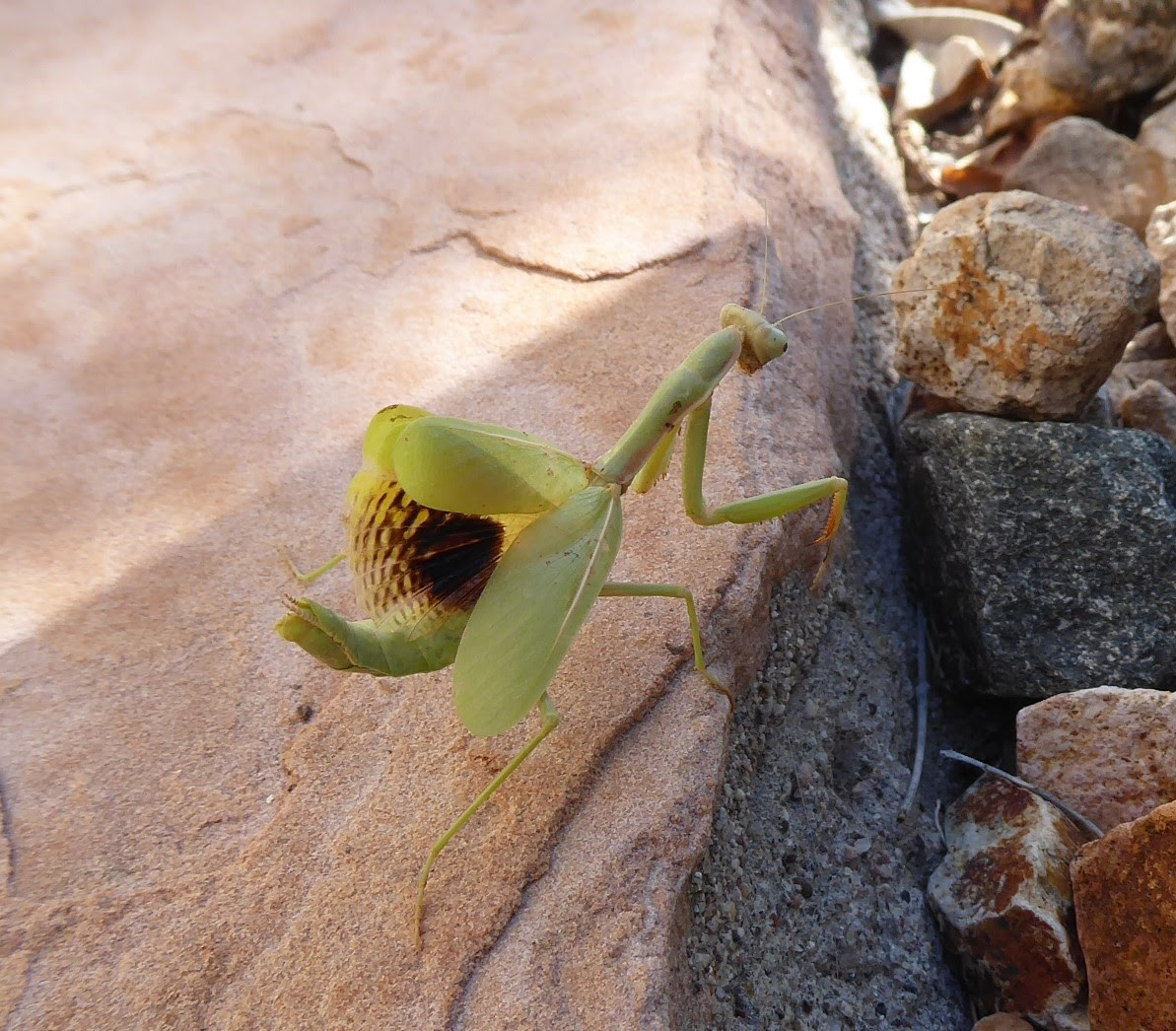 Aldo Leopold described the organization of living systems as a “biotic pyramid”, with soil at the base and carnivores at the top. In healthy systems, he wrote, energy moves up the pyramid as organisms consume and are consumed, and down as organisms die and decay. This season’s flush of insect life creates a surge of energy up the biotic pyramid, and yes, each of these creatures is miraculous in their own right.

This fall Liberty Wildlife partnered with the Phoenix Herpetological Society to welcome four new amphibians to our education collection: two Sonoran desert toads and two red spotted toads! Amphibians are a crucial part of many ecosystems, as they can indicate the initial effects of climate change and pollution. As an indicator species, they are important education animals as well. 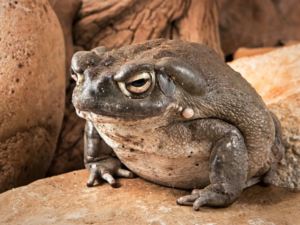 The Sonoran desert toads are Arizona’s largest toad, growing to seven and a half inches or more in length. They have smooth, olive-green to brown colored skin. They have crests on their head, called cranial crests; and have elongated glands on both sides of the back of the head and on the hind legs are called parotoid glands. They are found across southern Arizona, specifically the Sonoran desert scrub, semi-desert grasslands, and woodlands. They are nocturnal creatures and typically remain in rodent burrows underground for most of the year, only leaving during the summer monsoon season when they can be found out at night. They are quite glutinous creatures and eat just about anything that moves and will fit into their mouth. Typically this includes insects, arachnids, lizards, mice, and other amphibians. The species’ skin toxins are strong enough to kill a dog and reportedly have hallucinogenic qualities. The Sonoran desert toad is sometimes referred to as the “Colorado River toad”. Aside from habitat destruction, raccoons are another threat to these toads as they are the only animal recorded to have learned to ingest the toad with their poison. 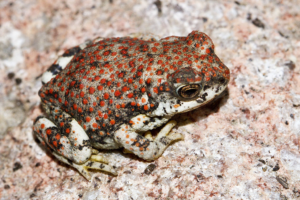 The red-spotted toads are a pale gray to tan with small red or yellowish-red warts. They can be up to 3 inches in length and they have a flattened head and body and round parotoid glands at the back of their head. Typically the red spotted toads are found at or near temporary or permanent water sources, often in rocky canyons or streams, in southwestern Arizona into grasslands, Great Basin Desert, oak woodlands, and coniferous forests of central and southeastern Arizona, and the Colorado Plateau of northern Arizona.  They spend the day in rock crevices or under rocks, and at dusk they walk to a nearby water source to look for food and a mate. Their diet includes small arthropods, such as ants, bugs, and bees. Red-spotted toads can tolerate a 40% loss in body water and still be active during dry periods. Interestingly enough, the red-spotted toads in Arizona have hybridized with the Sonoran green toad, and the larger Woodhouse’s and Great Plains toads.

Amphibians are very special creatures as they have skin that is permeable which means that things that they come in contact with; chemicals, air, or even our skin can go through their permeable layer of skin and enter their blood system.  If you come in contact with a toad or frog, the best thing to do for both you and the animal is to not touch them. At our facility, we use medical grade gloves, so if you find an injured amphibian we advise using medical gloves to contain the animal and then bringing it to a licensed rehabber.

There is a naming contest to name these wonderful creatures within our interactive room so make sure to visit the Liberty Wildlife campus make your suggestions soon!

With the weather cooling off, now is the perfect time to go birding around Phoenix. When you first start, birders sometimes appear to have their own language when hunkered down in the field pointing out a raft of ducks, a kettle of hawks, a flamboyance of flamingoes, a dissimulation of birds, or a parliament of owls.

Names for groups of birds (or collective nouns) are often fanciful, esoteric, and sometimes quite descriptive of bird’s behaviors and personalities. The first known collection of specific names for collective groups of animals, including many birds, was published in 1486 in ‘The Book of Saint Albans” in an essay on hunting.

The noun can describe a group of birds of any species such as a volery, flock or dissimulation. Some terms are often used for specific types of birds in large groups such as a charm of finches, a murder of crows, a cote of doves, or a convocation of eagles. Here are some more fun names: 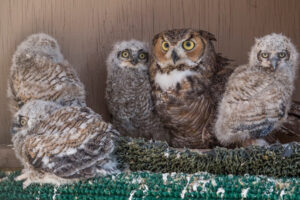 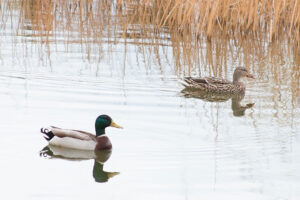 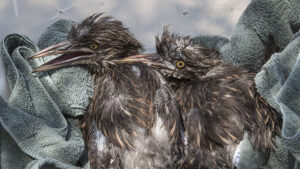 What is Green Hour*? It is an idea to encourage everyone and especially kids to spend an hour per day learning and playing outdoors in nature. It’s easy being green when you spend time outdoors. Check it out!

Leaf search   Go on a leaf patrol. See how many different kinds of leaves you can find. Can you match the leaves to the trees they came from? Go here for this activity and learn how to make a leaf rubbing. https://www.thegreenhour.org/activity/go-on-a-leaf-patrol/ 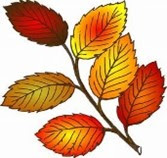 Watch wildlife   Go outside to your backyard, your neighborhood or nearby park and look for birds. You’ll be watching bird behaviors that you can use to make bird bingo cards. Find directions here: https://www.thegreenhour.org/activity/bird-bingo/

Take a hike Do you have a favorite spot outdoors? Is it a favorite tree or near water? Is it a little spot right in your backyard? Maybe it is a place you and your family like to hike to. This website shows you how to map your favorite spot then see if your family and friends can get there following your map!
https://www.thegreenhour.org/activity/take-a-hike/

BRRRRRR! It’s getting colder every day! You can help wildlife get ready for winter. Find out how you can help by providing water, shelter, and food for the wildlife living near you!
https://www.thegreenhour.org/activity/help-backyard-wildlife/
https://www.audubon.org/news/pumpkin-bird-feeder-makes-happy-harvest-birds

Notes your way: Look at these ideas for a Nature Notebook. You can write, draw, or even glue samples of the things you see and find outdoors. It can be something to share with friends or keep just for you!
https://www.thegreenhour.org/nature-notebook/fall-nature-notebook/